What is a Software Testing Type?

Software Testing Type is a classification of different testing activities into categories, each having, a defined test objective, test strategy, and test deliverables. The goal of having a testing type is to validate the Application Under Test(AUT) for the defined Test Objective.

For instance, the goal of Accessibility testing is to validate the AUT to be accessible by disabled people. So, if your Software solution must be disabled friendly, you check it against Accessibility Test Cases.

A list of 100 types of Software Testing Types along with definitions. A must read for any QA professional. 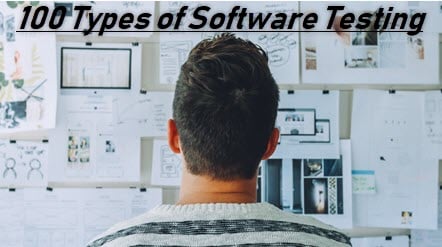 Bonus !!! Its always good to know a few extra

That concludes the list. Hope You enjoyed reading it.

Before learning mainframe testing concepts, lets learn What is a Mainframe? The mainframe is a...

{loadposition top-ads-automation-testing-tools} In agile development, the emphasis on building the...

Project Summary Agile and Scrum are the buzzwords in the IT industry. This demo Project will take you...