What is a System?

A system is an arrangement where all its component work according to the specific defined rules. It is a method of organizing, working, or performing one or more tasks according to a fixed plan.

What is an Embedded System?

Embedded System is a combination of computer software and hardware which is either fixed in capability or programmable. An embedded system can be either an independent system, or it can be a part of a large system. It is mostly designed for a specific function or functions within a larger system. For example, a fire alarm is a common example of an embedded system which can sense only smoke.

In this Embedded Systems tutorial, you will learn:

Laser Printers are one of the examples of Embedded Systems which uses embedded systems to manage various aspect of the printing. Apart from performing the main task of printing, it has to take user inputs, manage communication with the computer system, to handle faults, and sense papers left on the tray, etc.

Here, the main task of the microprocessor is to understand the text and control the printing head in such a way that it discharges ink where it is needed.

To perform this, it needs to decode the different files given to it and understand the font and graphics. It will consume substantial CPU time to process the data as well as it has to take user inputs, control motors, etc.

Here, are important milestones from the history of embedded system:

Characteristics of an Embedded System 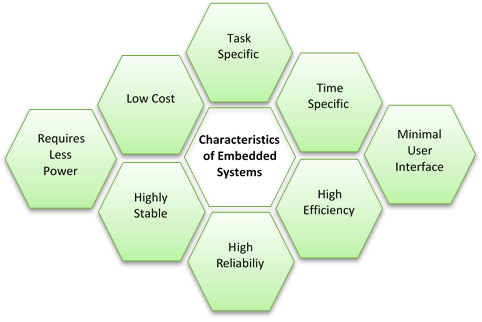 Characteristics of an Embedded System

Following are important characteristics of an embedded system:

Now in this Embedded Systems tutorial, we will cover some important terms used in embedded system.

This measure of the survival probability of the system when the function is critical during the run time.

Fault-Tolerance is the capability of a computer system to survive in the presence of faults.

Embedded system must meet various timing and other constraints. They are imposed on it by the real-time natural behavior of the external world.

For example, an airforce department which keeps track of incoming missile attacks must precisely calculate and plan their counter-attack due to hard real-time deadline. Otherwise, it’ll get destroyed.

For example, you are building a spacecraft which will land on another planter to collect various types of data and send collected detail back to us. If this spacecraft went insane and lost the control, we should be able to make some important diagnostic. So, flexibility is vital while designing an embedded system.

Portability is a measure of the ease of using the same embedded software in various environments. It requires generalized abstractions between the application program logic itself and the low-level system interfaces.

A microcontroller is a single-chip VLSI unit which is also called microcomputer. It contains all the memory and I/O interfaces needed, whereas a general-purpose microprocessor needs additional chips to offered by these necessary functions. Microcontrollers are widely used in embedded systems for real-time control applications.

What is a Microprocessor?

A microprocessor is a single chip semiconductor device. Its CPU contains a program counter, an ALU a stack pointer, working register, a clock timing circuit. It also includes ROM and RAM, memory decoder, and many serial and parallel ports.

Architecture of the Embedded System

Below is basic architecture of the Embedded System:

Architecture of the Embedded System

Sensor helps you to measures the physical quantity and converts it to an electrical signal. It also stores the measured quantity to the memory. This signal can be ready by an observer or by any electronic instrument such as A2D converter.

A-D converter (analog-to-digital converter) allows you to convert an analog signal sent by the sensor into a digital signal.

This component processes the data to measure the output and store it to the memory.

D-A converter (A digital-to-analog converter) helps you to convert the digital data fed by the processor to analog data.

An actuator allows you to compare the output given by the D-A converter to the actual output stored in it and stores the approved output in the memory.

Three types of Embedded Systems are: 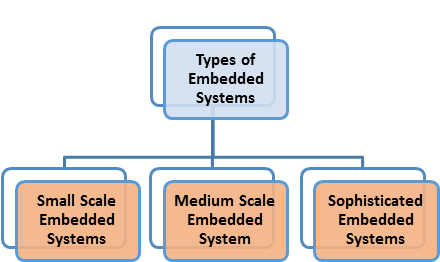 This embedded system can be designed with a single 8 or 16-bit microcontroller. It can be operated with the help of a battery. For developing small scale embedded system, an editor, assembler, (IDE), and cross assembler are the most vital programming tools.

These types of embedded systems are designed using 16 or 32-bit microcontrollers. These systems offer both hardware and software complexities. C, C++, Java, and source code engineering tool, etc. are used to develop this kind of embedded system.

Difference between Microprocessor and Microcontroller

Learn the difference between Microprocessor and Microcontroller

Following are the important applications of Embedded system: