We all know that Testing is verification and validation, and it takes 2 Vs to make testing complete. Out of the 2 Vs, Verification is called a Static testing and the other “V”, Validation is known as Dynamic testing.

Let’s understand How to do Dynamic Testing with an example:

Suppose we are testing a Login Page where we have two fields say “Username” and “Password” and the Username is restricted to Alphanumeric.

So based on the above statements we can say or conclude that dynamic testing is a process of validating software applications as an end user under different environments to build the right software.

What does dynamic testing do?

The main aim of the Dynamic tests is to ensure that software works properly during and after the installation of the software ensuring a stable application without any major flaws( this statement is made because no software is error free, testing only can show presence of defects and not absence)

The main purpose of the dynamic test is to ensure consistency to the software; lets discuss this with an example.

In a Banking Application, we find different screens like My Accounts Section, Funds Transfer, Bill Pay, etc.. All these screens contain amount field which accepts some characters.

Let’s say My Accounts field displays amount as 25,000 and Funds Transfer as $25,000 and Bill pay screen as $25000 though the amount is the same, the way amount is displayed is not the same hence making the software nonconsistent.

Consistency is not only limited to the functionality it also refers to different standards like performance, usability, compatibity etc, hence it becomes very important to perform Dynamic Testing.

The below pictorial representation gives us an idea about types of Dynamic Testing, Levels of Testing, etc. 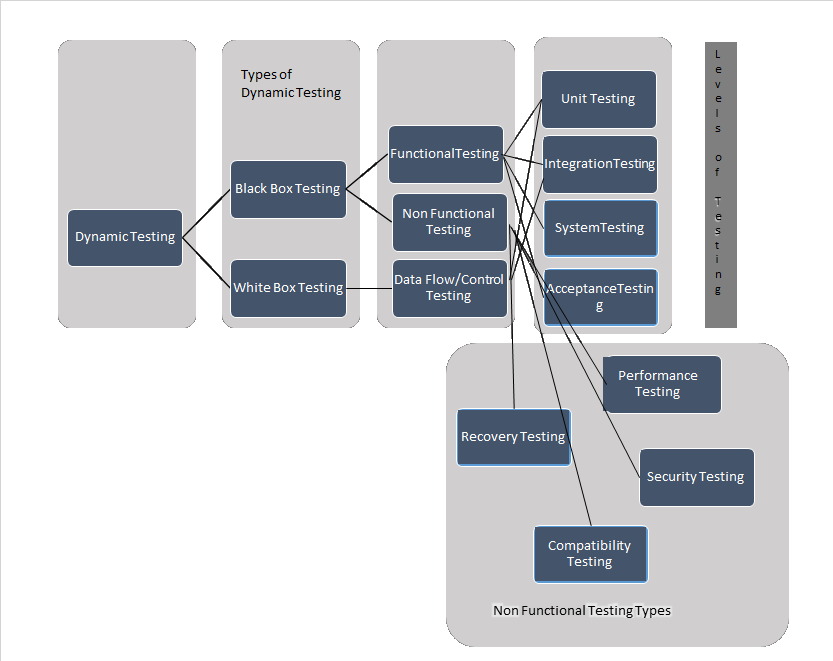 White Box Testing – White Box Testing is a software testing method in which the internal structure/ design is known to the tester. The main aim of White Box testing is to check on how System is performing based on the code. It is mainly performed by the Developers or White Box Testers who has knowledge on the programming.

Black Box Testing – Black Box Testing is a method of testing in which the internal structure/ code/design is NOT known to the tester. The main aim of this testing to verify the functionality of the system under test and this type of testing requires to execute the complete test suite and is mainly performed by the Testers, and there is no need of any programming knowledge.

The Black Box Testing is again classified into two types.

Dynamic Testing Techniques in STLC consists of different tasks like Requirements Analysis for the tests, Test Planning, Test case design and implementation, Test environment setup, Test case execution, Bug reporting and finally Test closure. All the tasks in dynamic testing techniques are dependent on the completion of the previous task in the testing process.

In STLC, we can say that actual Dynamic Testing Process starts from Test Case Design, let’s discuss each activity in details. 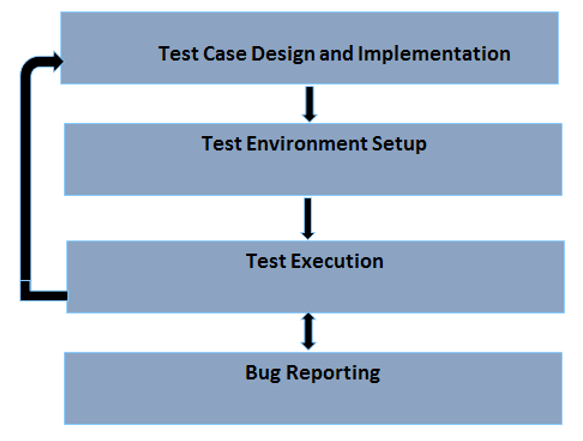 Before getting into the process lets discuss the strategy that needs to be followed for Dynamic Testing.

Test Strategy should mainly focus on the resources available and the timeframe. Based on these factors, the objective of the testing, the scope of testing, phases or cycles of testing, type of environment, assumptions or challenges that might be faced, risks, etc. has to be documented.

What is Test design and Implementation

In this phase we identify the,

We have to ensure that Testing Environment should always be similar to the Production environment, in this phase we have to install the build and manage the test machines.

During this phase, test cases are actually executed.

Based on the Execution if the Expected and Actual Results are not same then the Test case has to be marked as Fail and a Bug should be logged.