It is one of two parts of the Box Testing approach to software testing. Its counterpart, Blackbox testing, involves testing from an external or end-user perspective. On the other hand, White box testing in software engineering is based on the inner workings of an application and revolves around internal testing.

The term “WhiteBox” was used because of the see-through box concept. The clear box or WhiteBox name symbolizes the ability to see through the software’s outer shell (or “box”) into its inner workings. Likewise, the “black box” in “Black Box Testing” symbolizes not being able to see the inner workings of the software so that only the end-user experience can be tested.

What do you verify in White Box Testing?

White box testing involves the testing of the software code for the following:

The testing can be done at system, integration, and unit levels of software development. One of the basic goals of whitebox testing is to verify a working flow for an application. It involves testing a series of predefined inputs against expected or desired outputs so that when a specific input does not result in the expected output, you have encountered a bug.


How do you perform White Box Testing?

We have divided it into two basic steps to give you a simplified explanation of white box testing. This is what testers do when testing an application using the white box testing technique:

The first thing a tester will often do is learn and understand the source code of the application. Since white box testing involves the testing of the inner workings of an application, the tester must be very knowledgeable in the programming languages used in the applications they are testing. Also, the testing person must be highly aware of secure coding practices. Security is often one of the primary objectives of testing software. The tester should be able to find security issues and prevent attacks from hackers and naive users who might inject malicious code into the application either knowingly or unknowingly.

The second basic step to white box testing involves testing the application’s source code for proper flow and structure. One way is by writing more code to test the application’s source code. The tester will develop little tests for each process or series of processes in the application. This method requires that the tester must have intimate knowledge of the code and is often done by the developer. Other methods include Manual Testing, trial, and error testing and the use of testing tools as we will explain further on in this article. 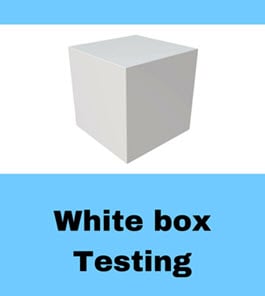 Consider the following piece of code

The goal of WhiteBox testing in software engineering is to verify all the decision branches, loops, and statements in the code.

To exercise the statements in the above white box testing example, WhiteBox test cases would be

Statement Coverage:- This technique requires every possible statement in the code to be tested at least once during the testing process of software engineering.

Branch Coverage – This technique checks every possible path (if-else and other conditional loops) of a software application.

White box testing encompasses several testing types used to evaluate the usability of an application, block of code or specific software package. There are listed below —

Apart from the above, a few testing types are part of both black box and white box testing. They are listed below

Below is a list of top white box testing tools.