What is Mutation Testing?

The changes made in the mutant program should be kept extremely small that it does not affect the overall objective of the program. Mutation Testing is also called Fault-based testing strategy as it involves creating a fault in the program and it is a type of White Box Testing which is mainly used for Unit Testing.

Mutation was originally proposed in 1971 but lost fervor due to the high costs involved. Now, again it has picked steam and is widely used for languages such as Java and XML.

How to execute Mutation Testing? 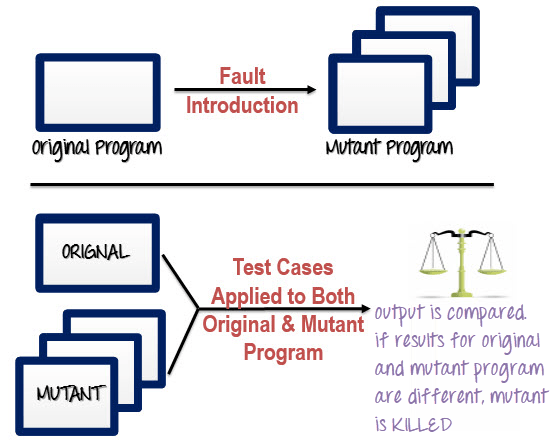 Following are the steps to execute mutation testing (mutation analysis):

Step 1: Faults are introduced into the source code of the program by creating many versions called mutants. Each mutant should contain a single fault, and the goal is to cause the mutant version to fail which demonstrates the effectiveness of the test cases.

Step 2: Test cases are applied to the original program and also to the mutant program. A Test Case should be adequate, and it is tweaked to detect faults in a program.

Step 3: Compare the results of an original and mutant program.

Step 5: If the original program and mutant program generate the same output, Mutant is kept alive. In such cases, more effective test cases need to be created that kill all mutants.

How to Create Mutant Programs?

A mutation is nothing but a single syntactic change that is made to the program statement. Each mutant program should differ from the original program by one mutation.

What to change in a Mutant Program?

There are several techniques that could be used to generate mutant programs. Let’s look at them

Mutation testing is extremely time consuming and complicated to execute manually. To speed up the process, it is advisable to go for automation tools. Automation tools reduce the cost of testing as well.

The mutation score is defined as the percentage of killed mutants with the total number of mutants.

Test cases are mutation adequate if the score is 100%. Experimental results have shown that mutation testing is an effective approach for measuring the adequacy of the test cases. But, the main drawback is that the high cost of generating the mutants and executing each test case against that mutant program.

Following are the advantages of Mutation Testing:

On the other side, the following are the disadvantages of Mutant testing:

Do you want exhaustive testing of your application? The answer is Mutation testing. It is the most comprehensive technique to test a program. This is the method which checks for the effectiveness and accuracy of a testing program to detect the faults or errors in the system.