Scrum in Software Testing is a methodology for building complex software applications. It provides easy solutions for executing complicated tasks. Scrum helps the development team to focus on all aspects of the software product development like quality, performance, usability and so on. It provides with transparency, inspection and adaptation during the software development to avoid complexity.

Scrum Testing is a testing done in scrum methodology to verify the software application requirements are met. It involves checking non-functional parameters like security, usability, performance etc. There is no active role of tester in the process so it is usually performed by developers with Unit Test. Sometimes dedicated test teams are needed depending on nature & complexity of project.

Following are Key Features of Scrum-

Scrum is based on the following 3 Pillars- 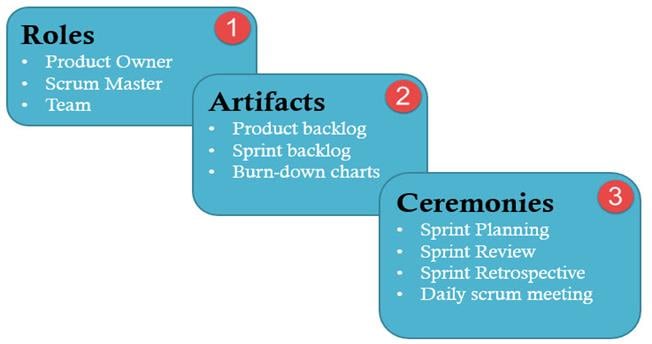 Let’s look at the one by one

There are three chief roles in Scrum Testing – Product Owner, Scrum Master and The Development Team. Let’s study them in detail

Role of Tester in Scrum

There is no active role of Tester in the Scrum Process. Usually, testing is carried out by a developer with Unit Test. While product owner is also frequently involved in the testing process during each sprint. Some Scrum projects do have dedicated test teams depending on the nature & complexity of the project.

The next question is, what tester do in a scrum? Following note will answer

Testers do following activities during the various stages of Scrum-

Scrum Test metrics reporting provides transparency and visibility to stakeholders about the project. The metrics that are reported allow a team to analyze their progress and plan their future strategy to improve the product. There are two metrics that are frequently used to report.

Burn down chart: Each day, Scrum Master records the estimated remaining work for the sprint. This is nothing but the Burn Down Chart. It is updated daily. 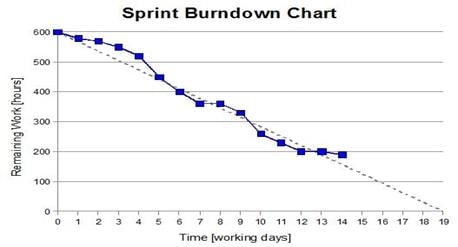 The additional metrics that may be useful are schedule burn, budget burn, theme percent complete, stories completed – stories remaining and so on.

This is all about Scrum in software engineering