What is Agile Testing?

Agile Testing is a testing practice that follows the rules and principles of agile software development. Unlike the Waterfall method, Agile Testing can begin at the start of the project with continuous integration between development and testing. Agile Testing methodology is not sequential (in the sense it’s executed only after coding phase) but continuous.

Here are the essential Principles of Agile Testing:

The agile Testing life cycle is completed in five different phases, as we can see in the following image: 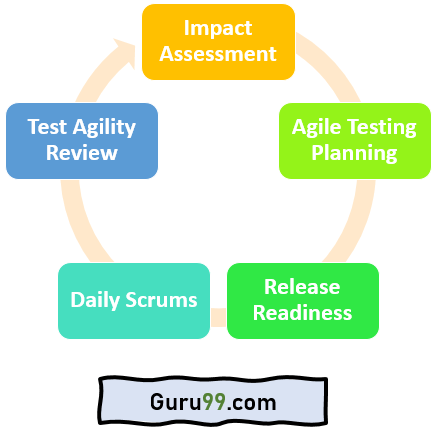 Phase1: Impact Assessment: In this initial phase, we gather inputs from stakeholders and users. This phase is also called the feedback phase, as it assists the test engineers in setting the objectives for the next life cycle.

Phase 2: Agile Testing Planning: It is the second phase of the Agile testing life cycle, where all stakeholders come together to plan the schedule of the testing process and deliverables.

Phase 3: Release Readiness: At this stage, we review the features that have been developed/ Implemented are ready to go live or not. In this stage, it is also decided which one needs to go back to the previous development phase.

Phase 4: Daily Scrums: This stage includes every standup morning meeting to catch up on the status of testing and set the goal for the entire day.

Phase 5: Test Agility Review: The last phase of the Agile life cycle is the Agility Review Meeting. It involves weekly meetings with stakeholders to regularly evaluate and assess progress against goals.

Agile test plan includes types of testing done in that iteration like test data requirements, infrastructure, test environments, and test results. Unlike the waterfall model, in an agile model, a test plan is written and updated for every release. Typical test plans in agile includes

The second phase of agile testing methodology is Construction Iterations, the majority of the testing occurs during this phase. This phase is observed as a set of iterations to build an increment of the solution. In order to do that, within each iteration, the team implements a hybrid of practices from XP, Scrum, Agile modeling, and agile data and so on.

In construction iteration, the agile team follows the prioritized requirement practice: With each iteration, they take the most essential requirements remaining from the work item stack and implement them.

The goal of “Release, End Game” is to deploy your system successfully into production. The activities include in this phase are training of end users, support people and operational people. Also, it includes marketing of the product release, back-up & restoration, finalization of system and user documentation.

The final agile methodology testing stage includes full system testing and acceptance testing. In accordance to finish your final testing stage without any obstacles, you should have to test the product more rigorously while it is in construction iterations. During the end game, testers will be working on its defect stories.

After the release stage, the product will move to the production stage. 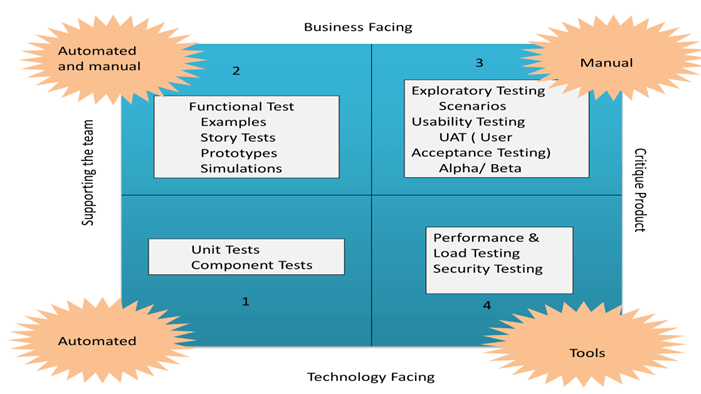 The internal code quality is the main focus in this quadrant, and it consists of test cases which are technology driven and are implemented to support the team, it includes

It contains test cases that are business driven and are implemented to support the team. This Quadrant focuses on the requirements. The kind of test performed in this phase is

This quadrant provides feedback to quadrants one and two. The test cases can be used as the basis to perform automation testing. In this quadrant, many rounds of iteration reviews are carried out which builds confidence in the product. The kind of testing done in this quadrant is

Risk of Automation in Agile Process

Agile methodology in software testing involves testing as early as possible in the software development lifecycle. It demands high customer involvement and testing code as soon as it becomes available. The code should be stable enough to take it to system testing. Extensive regression testing can be done to make sure that the bugs are fixed and tested. Mainly, Communication between the teams makes agile model testing success!!!