What is Domain Testing?

Domain Testing is a Software Testing process in which the application is tested by giving a minimum number of inputs and evaluating its appropriate outputs. The primary goal of Domain testing is to check whether the software application accepts inputs within the acceptable range and delivers required output.

It is a Functional Testing technique in which the output of a system is tested with a minimal number of inputs to ensure that the system does not accept invalid and out of range input values. It is one of the most important White Box Testing methods. It also verifies that the system should not accept inputs, conditions and indices outside the specified or valid range.

Domain testing differs for each specific domain so you need to have domain specific knowledge in order to test a software system.

In domain testing, we divide a domain into sub-domains (equivalence classes) and then test using values from each subdomain. For example, if a website (domain) has been given for testing, we will be dividing the website into small portions (subdomain) for the ease of testing.

Boundary testing – Boundary value analysis (BVA) is based on testing at the boundaries between partitions. We will be testing both the valid and invalid input values in the partition/classes.

Equivalence Class testing – The idea behind this technique is to divide (i.e. to partition) a set of test conditions into groups or sets that can be considered the same (i.e. the system should handle them equivalently), hence ‘equivalence partitioning.’

It can be simplified as below:

While domain testing, you need to consider following things,

What domain are we testing? 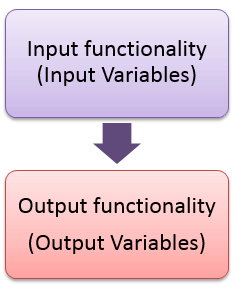 C = a+b, where a and b are input variables and C is the output variable.

Here in the above example, there is no need of classification or combination of the variables is required.

Consider a games exhibition for Children, 6 competitions are laid out, and tickets have to be given according to the age and gender input. The ticketing is one of the modules to be tested in for the whole functionality of Games exhibition.

According to the scenario, we got six scenarios based on the age and the competitions:

Here the input will be Age and Gender and hence the ticket for the competition will be issued. This case partition of inputs or simply grouping of values come into the picture.

How to group the values into classes?

Partitioning some values means splitting it into non-overlapping subsets.

As we discussed earlier there are two types of partitioning:

Which values of the classes to be tested?

The values picked up for testing should be Boundary values:

For the above example we have the following classes to be tested:

For example for the scenario #1:

How do we determine whether the program passed or failed the test?

Passing the functionality not only depends upon the results of the above scenarios. The input given and the expected output will give us the results and this requires domain knowledge.

Determining the results of the example: 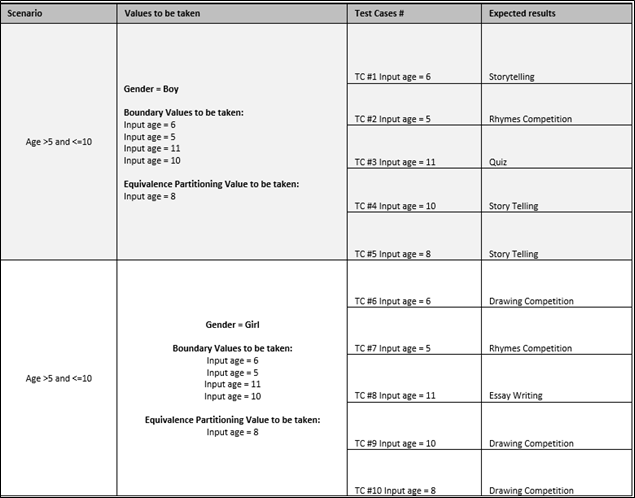 Hence, if all the test cases of the above pass, the domain of issuing tickets in the competition get passed. If not, the domain gets failed.

Usually, testers follow the below steps in a domain testing. These may be customized/ skipped according to our testing needs.

Domain testing, as it is described above, requires knowledge of providing right input to achieve the desired output. Thus, it is only possible to use it for small chunks of code.