Agile Automation Testing in software development is an approach of using test automation in agile methodologies. The purpose of agile automation testing is to make the software development process more effective and efficient while maintaining the quality and time as well as resource consumption. Thus, the implementation of such a process requires a lot of coordination and collaboration between teams.

In the last few years, ever since the agile methodology came on board with its founders shouting and willing to do away with the mundane and laborious realities of the traditional waterfall model, the impact of the same can be also felt when it comes to Automation Testing. 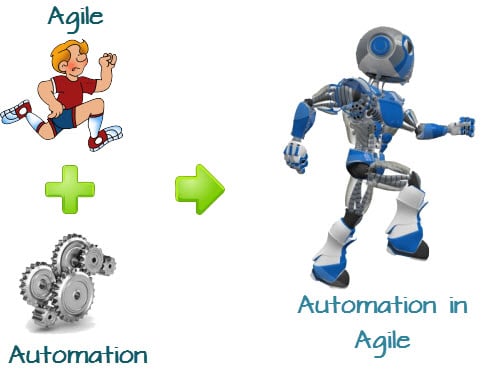 In the realm of the traditional process of software testing life cycle, Automation Testing is normally feasible when the application is stable, steady and the requirement is involving with a real considerable amount of time and in most cases involving a set of very skillful automation expert resources as well as a considerable amount of set-up costs. The basic purpose of Automation Testing is to reduce costs over a long time and to ensure no new defects have been introduced as a result of existing test cases.

How to automate in Agile Methodology 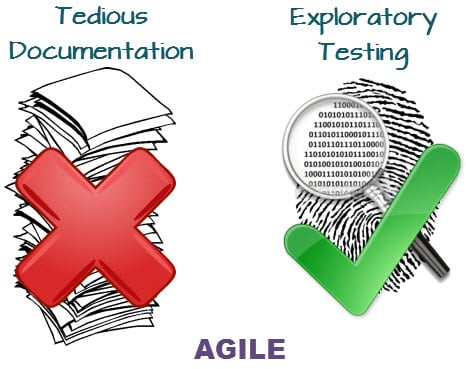 Thus we could see a contradiction between the basic fundamental philosophies of agile methodologies and Automation Testing.

So we need to consider certain fundamental points here when it comes to evaluating the use of agile methodologies with respect to the Automation Testing methods and techniques. Thus we need to consider some fundamental points like time taken for design and coding, validation of the designed scripts with the existing test data and the adoption of the same for testing (whether the tests are of functional or regression purposes) So the real fact of all these events is that in order to perform all these facts, we need to ensure that a considerable amount of time is required for these tasks and in an agile environment where an average sprint takes an average 1-2 weeks to complete and thus it is obviously too difficult to contemplate affording so much time for automating scripts in such a way.

Another significant factor remains here that the type of changes in requirements which come into picture when the agile methodology is at play. The agile methodology by its own very definition is a sort of technique which is very helpful for responding to quick customer induced change requirements and which thus lends itself well to frequent changes during the overall development of the application.

The selection of relevant automation tool is also a potentially very important factor when it comes to the adoption of automation testing within the scope of an overall agile methodology. Licensed automation tools, for example, impose strict security access criterion to different types and levels of users when it comes accessing various important resources belonging to that particular testing automation framework. 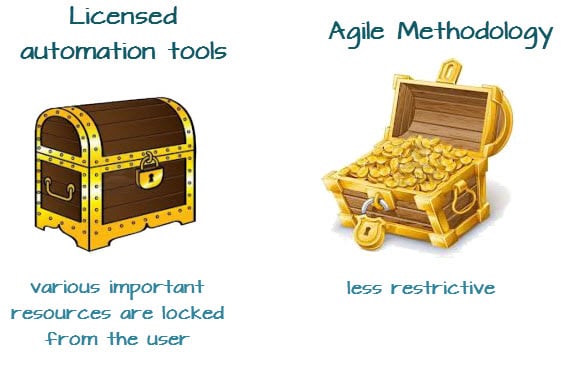 In contrast agile methodology emphasizes upon mostly open collaboration and open-ended interaction between team members and thus restrictive policies which directly affects how the users would have a negative impact on the overall cohesion within the team and thus may be leading into results which are neither very helpful nor very conducive to the overall success of the project.

Therefore the primary importance of the process should be to ensure that in order to obtain the quality delivery of automation test scripts within a stipulated time as afforded by agile methodology; we need to choose our prospective test cases which would be automated in a more nuanced way such that these automated test scripts lend themselves well for future re-use as well as ensuring that they can be prepared within the proper duration of the allotted time (as required during the agile methodology process).

After consideration of all the above factors we thus can realize that even while adopting agile methodologies, we need to bring into picture the types of tests like for example regression tests (since even during agile testing there is a considerable amount of testing work which is required to put into the job of agile methodologies for ensuring better quality of the overall product)

Now let us look at the most basic situations whereby automation testing can be used and how we can adopt the same towards the realm of agile testing. 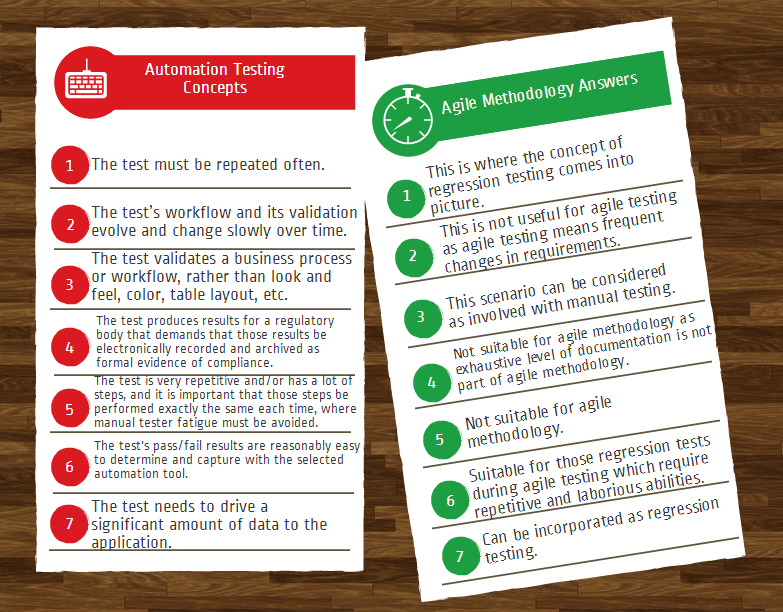