As discussed above, Configuration Testing is a software testing where the application under test has to be tested using multiple combinations of Software and Hardware.

Let’s understand this with an example of a Desktop Application:

Generally, Desktop applications will be of 2 tier or 3 tier, here we will consider a 3 tier Desktop application which is developed using Asp.Net and consists of Client, Business Logic Server and Database Server where each component supports below-mentioned platforms.

A tester has to test the Combination of Client, Server and Database with combinations of the above-mentioned platforms and database versions to ensure that the application is functioning properly and does not fail.

Configuration testing is not only restricted to Software but also applicable for Hardware which is why it is also referred as a Hardware configuration testing, where we test different hardware devices like Printers, Scanners, Web cams, etc. that support the application under test. 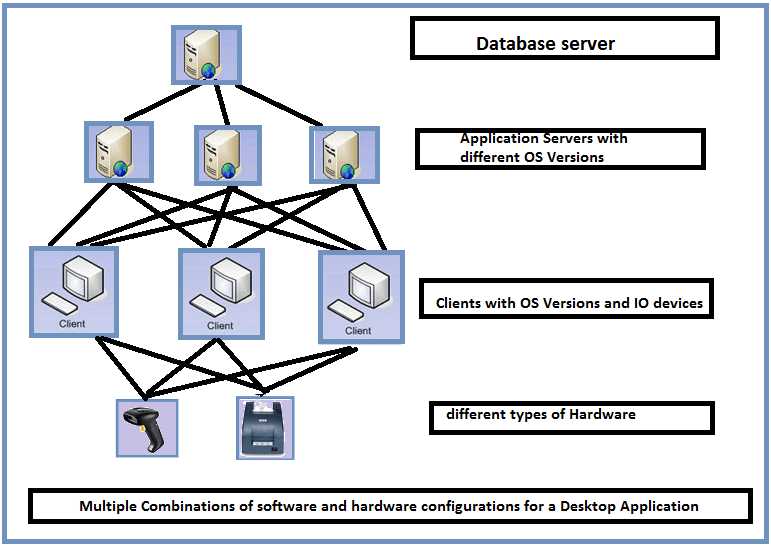 For any project before starting with the config test, we have to follow some pre-requisites

The objectives of configuration Testing is to

How to do Configuration Testing

Instead of Installing and uninstalling the software in multiple physical machines which is time-consuming, it’s always better to install the application/software in the virtual machine and continue testing. This process can be performed by having multiple virtual machines, which simplifies the job of a tester

Another strategy is to ensure the system is working fine by manually failing the test cases and verifying for the efficiency.

Say there is a Banking Application, which has to be tested for its compatibility across multiple browsers when the application is hosted in an environment where all the prerequisites are present it might pass the unit and Integration Testing in the test lab.

But if the same application is installed in a client place and the machines are missing some software’s updates or the versions on which the application is dependent directly or indirectly there is a chance that the application might fail. To avoid this kind of situation, it’s always suggested to fail the tests manually by removing some of the configurability requirements and then proceed with the testing. 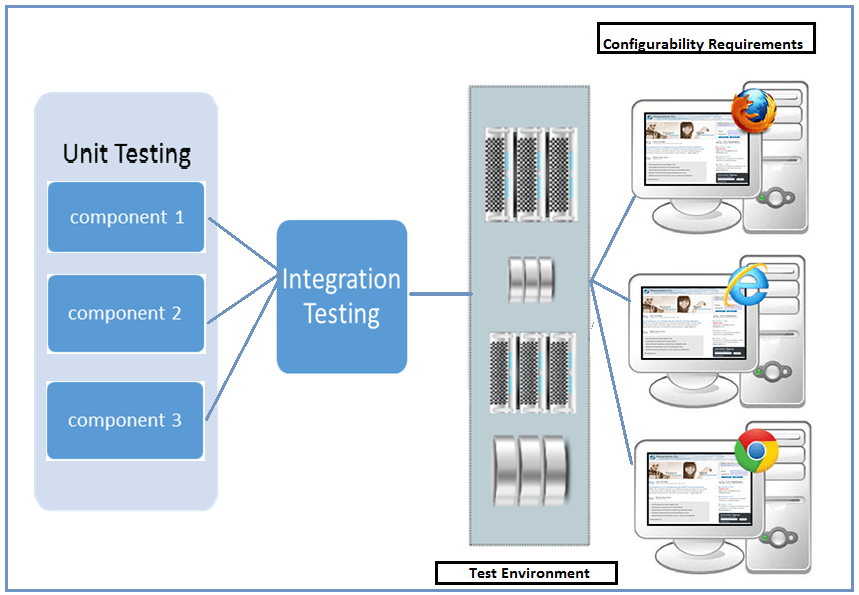 Hardware configuration testing is generally performed in labs, where we find physical machines with different hardware attached to them.

Whenever a build is released, the software has to be installed in all the physical machines where the hardware is attached, and the test suite has to be run on each machine to ensure that the application is working fine.

To perform the above task a significant amount of effort is required to install the software on each machine, attach the hardware and manually running or even to automate the above said process and running the test suite.

Also, while performing hardware configuration test, we specify the type of hardware to be tested, and there are a lot of computer hardware and peripherals which make it quite impossible to run all of them. So it becomes the duty of the tester to analyze what hardware is mostly used by users and try to make the testing based on the prioritization.

Consider a Banking Scenario to test for the hardware compatibility. A Banking Application that is connected to Note Counting Machine has to be tested with different models like Rolex, Strob, Maxsell, StoK, etc.

The above test cases are for one model, and the same has to be tested with all the models available in the market by setting them up in a test lab which is difficult. Hence, it is advisable to outsource the hardware configuration testing to organizations which specializes them.

In Software Engineering, Configuration Testing should be given with equal importance like other testing types. Without configuration testing being performed it is difficult to analyze the optimal system performance and also software might encounter compatibility issues that it is supposed to run on.