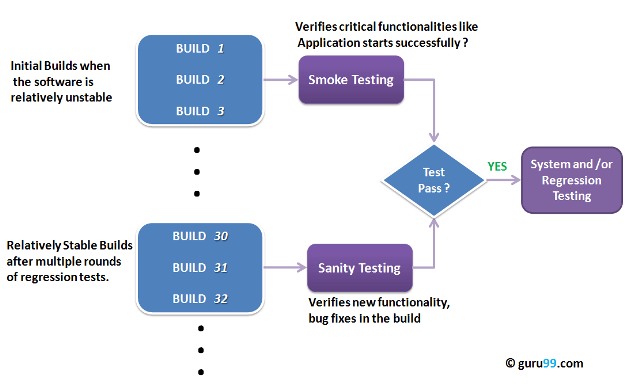 What is a Software Build?

If you are developing a simple computer program which consists of only one source code file, you merely need to compile and link this one file, to produce an executable file. This process is very simple.
Usually, this is not the case. A typical Software Project consists of hundreds or even thousands of source code files. Creating an executable program from these source files is a complicated and time-consuming task.
You need to use “build” software to create an executable program and the process is called ” Software Build“

What is Smoke Testing?

In Smoke Testing, the test cases chose to cover the most important functionality or component of the system. The objective is not to perform exhaustive testing, but to verify that the critical functionalities of the system are working fine.
For Example, a typical smoke test would be – Verify that the application launches successfully, Check that the GUI is responsive … etc.

What is Sanity Testing?

Sanity testing is a kind of Software Testing performed after receiving a software build, with minor changes in code, or functionality, to ascertain that the bugs have been fixed and no further issues are introduced due to these changes. The goal is to determine that the proposed functionality works roughly as expected. If sanity test fails, the build is rejected to save the time and costs involved in a more rigorous testing.

The objective is “not” to verify thoroughly the new functionality but to determine that the developer has applied some rationality (sanity) while producing the software. For instance, if your scientific calculator gives the result of 2 + 2 =5! Then, there is no point testing the advanced functionalities like sin 30 + cos 50.

Following is the difference between Sanity and Smoke testing:

Points to note about Smoke and Sanity Tests