What is Regression Testing?

This testing is done to ensure that new code changes do not have side effects on the existing functionalities. It ensures that the old code still works once the latest code changes are done.

How to do Regression Testing

In order to do Regression Testing process, we need to first debug the code to identify the bugs. Once the bugs are identified, required changes are made to fix it, then the regression testing is done by selecting relevant test cases from the test suite that covers both modified and affected parts of the code.

Software maintenance is an activity which includes enhancements, error corrections, optimization and deletion of existing features. These modifications may cause the system to work incorrectly. Therefore, Regression Testing becomes necessary. Regression Testing can be carried out using the following techniques: 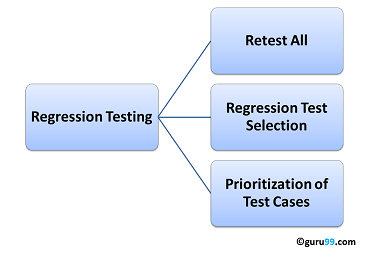 This is one of the methods for Regression Testing in which all the tests in the existing test bucket or suite should be re-executed. This is very expensive as it requires huge time and resources.

Prioritize the test cases depending on business impact, critical & frequently used functionalities. Selection of test cases based on priority will greatly reduce the regression test suite.

It was found from industry data that a good number of the defects reported by customers were due to last minute bug fixes creating side effects and hence selecting the Test Case for regression testing is an art and not that easy.  Effective Regression Tests can be done by selecting the following test cases –

Following are the most important tools used for both functional and regression testing in software engineering:

testRigor helps you to directly express tests as executable specifications in plain English. Users of all technical abilities are able to build end-to-end tests of any complexity covering mobile, web, and API steps in one test. Test steps are expressed on the end-user level instead of relying on details of implementation like XPaths or CSS Selectors.

Avo Assure is a technology agnostic, no-code test automation solution that helps you test end-to-end business processes with a few clicks of the buttons. This makes regression testing more straightforward and faster.

Subject7 is a cloud-based, “true codeless” test automation solution that unifies all testing in a single platform and empowers anyone to become an automation expert. Our easy-to-use software enables fast, easy, and sophisticated authoring of regression tests without writing a line of code, and high scale execution that runs thousands of nightly tests.

Selenium: This is an open source tool used for automating web applications. Selenium can be used for browser-based regression testing.

Configuration Management during Regression Testing becomes imperative in Agile Environments where a code is being continuously modified. To ensure effective regression tests, observe the following :

Difference between Re-Testing and Regression Testing

Retesting means testing the functionality or bug again to ensure the code is fixed. If it is not fixed, Defect needs to be re-opened. If fixed, Defect is closed.

Regression testing means testing your software application when it undergoes a code change to ensure that the new code has not affected other parts of the software.

Also, Check out the complete list of differences over here.

Following are the major testing problems for doing regression testing:

Practical Application of Regression Testing Example with a Video