What is Path Testing?

Path testing is a structural testing method that involves using the source code of a program in order to find every possible executable path. It helps to determine all faults lying within a piece of code. This method is designed to execute all or selected path through a computer program.

Any software program includes, multiple entry and exit points. Testing each of these points is a challenging as well as time-consuming. In order to reduce the redundant tests and to achieve maximum test coverage, basis path testing is used.

Basis Path Testing in software engineering is a White Box Testing method in which test cases are defined based on flows or logical paths that can be taken through the program. The objective of basis path testing is to define the number of independent paths, so the number of test cases needed can be defined explicitly to maximize test coverage.

In software engineering, Basis path testing involves execution of all possible blocks in a program and achieves maximum path coverage with the least number of test cases. It is a hybrid method of branch testing and path testing methods.

Here we will take a simple example, to get a better idea what is basis path testing include 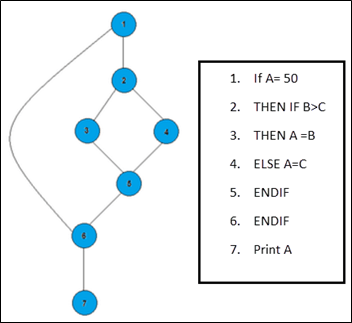 In the above example, we can see there are few conditional statements that is executed depending on what condition it suffice. Here there are 3 paths or condition that need to be tested to get the output,

The basic steps involved in basis path testing include

Basis path testing helps to determine all faults lying within a piece of code.