Android is the most targeted mobile platform across the world by hackers. To protect yourself against sophisticated hackers, you need to understand how they operate and the methods they use to hack Android devices. Many Android hacking apps allow you to spy on your spouse, read their messages, record phone calls, and more.

mSpy is a parental tracking tool installed on the Android operating system. Many people also use it to spy on their spouses, but you need physical access to the Phone you’re installing it on.

How to Hack Someone’s Phone with mSpy Step 2) Select the type of cell phone device you want to monitor. (Android or iOS devices). You need to make sure that you have physical access to the Phone.

In this case, we have selected Android. Step 3) Next, the device manufacturer

You get several options from different Android device manufacturers like 1) Samsung, 2) Huawei, 3) Xiaomi, 4) Moto, 5) Google Pixel, 6) LG, and 7) any other manufacturers.

In this example, we have selected Samsung. Then Press “Proceed,” Step 5) You should log in to your mSpy dashboard on the web.

Allow some time (2-3 hours) for this phone tracker app to record your social media activities. Other Tools to Hack Android Phone

uMobix is another parental tracking tool for Android phones and tablets. You can install it without the person you’re tracking knowing that you’ve installed it. It runs in the background and only takes a few minutes to install.

Hoverwatch is a free mobile Android hacking tool that allows you to spy on someone without them noticing. You can easily use it to hack Android devices and track all of them from your online account. 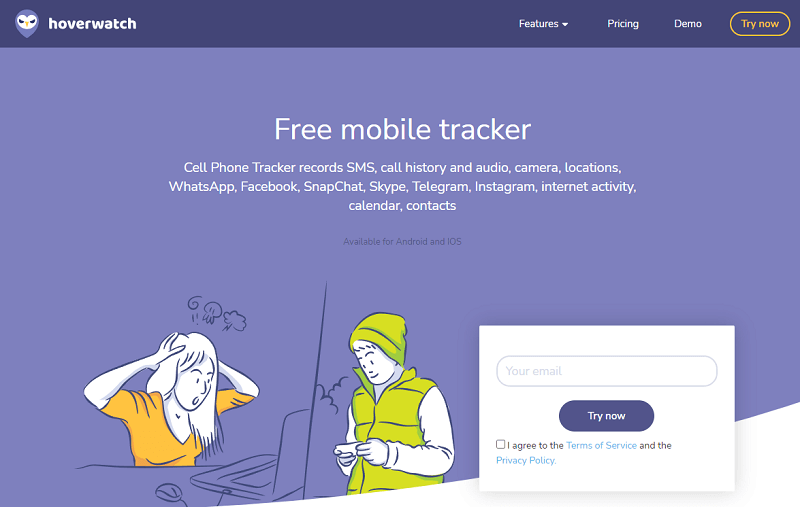 While there are numerous ways to hack an Android device, most Android security attacks use one of the following eight methods.

Study these methods of how to hack Android phones carefully so you can learn how to defend yourself.

For example, a hacker may call you and pretend to be someone calling from your bank, saying there is an issue with your account. They may advise you to open your banking app. In the process, they may ask you to give over your online banking password or social security number.

Android hacking apps are explicitly designed to allow people to hack your Phone, as these Android applications are not available in the Play Store. Instead, hackers can install them from third-party sites.

Developers target these apps toward spouses and partners who want to track what their significant others are doing. They allow you to read your partner’s text messages and browsing history. It also offers geolocation features that let you see exactly where your partner is at any time. You can check if they installed Tinder; some apps even allow you to record their calls.

These apps fall into the social engineering category because they don’t require advanced IT skills or hacking knowledge. Your partner will also need access to your Phone – you can’t install them remotely. They’ll need to think of a reason to use the Phone. This could be something small, like wanting to check the news on your phone or to send themselves a picture you took.

Malvertising is a term that refers to injecting ads with malware. Clicking on these ads might cause malware to download to your laptop. It is maybe more widespread than you thought.

So, only using “safe” websites won’t help you, as hackers have managed to inject malware into ads on sites like the New York Times, Spotify, and the London Stock Exchange.

Remember, many sites use ad distribution networks to run ads. These networks can be compromised. Once the attacker has managed to get malware to download to your device, they can spy on your activities. They may be able to see passwords you enter or view your photos and even able to control your camera.

Smishing is a type of phishing attack in which hackers will send you text messages that seem to come from reputable businesses. Companies often use shortcodes to send alerts, including banks, apps like Airbnb, and others.

A hacker may use a shortcode claiming to be your bank. For example, they may send a text message with a link and ask you to review your account security details. The link is usually malicious in one of two ways.

There is an aspect of social engineering to smishing because hackers have to use trustworthy language in their text messages, so they seem to come from your bank. Often, they use fear tactics, such as fake fraud alerts, to make you act quickly without thinking.

Malware is a word that refers to malicious software in general. While smishing is one-way hackers spread malware, there are many other ways malware can get on your Android operating system.

For example, if you visit pirating sites and download videos, movies, or series, you may inadvertently download malware as part of the download package. The same applies to downloading apps from unofficial sources (not available in the Google Play Store).

You may also accidentally install malware on your Phone by clicking a malicious link on a website or in your emails. Some apps – even those on the Google Play Store – are infected with malware.

There are many types of malwares as well. Some types of malwares log your passwords and text messages, while others hack your camera. Ransomware is an insidious form of malware that locks your data or device until you pay to have it released. Hackers will demand money in the form of cryptocurrency to avoid tracking. To protect against this, you should install an anti-malware tool.

One of the reasons Android is a lot more vulnerable to attacks than iPhones is that Google doesn’t do nearly as good of a job regulating its apps as Apple. The Apple Play Store is pretty safe, but malware has found its way into apps that Google approved for the Google Play Store time and time again.

Dozens of apps have had malware in them. People have installed these malware-infected apps alone three million times! Most of these apps often appear innocent enough.

They might make pretense as game apps, educational apps, or music apps. However, they contain malicious code that can modify your device’s work, show you unsolicited ads, or even track your activities.

Usually, Google removes these malicious apps from the Play Store once it gets wind of what’s happening. However, that can sometimes take a while.

There are two ways which help you to protect yourself against malicious apps:

Pretexting is a specific form of social engineering that involves using pretexts to contact you and ask for personal details.

Some examples of pretexts can include:

The latter form is insidious because you often don’t realize anything malicious is happening. Many people are smart enough to realize that it probably is if an offer sounds too good to be true. Many other people also double-check unsolicited text messages to ensure they come from a legitimate source.

However, if someone hacks into your friend’s Instagram account and sends you text messages, you will likely not think twice about trusting them. They’re your friend, after all, and you know them in person.

An attacker might hack into someone’s Snapchat account and send messages with suspicious links to all their friends. Or they may use the pretext of needing help getting a verification code because they lost their Phone. You may think you’re helping your friend log back into their Facebook or bank account, but you’re helping a hacker log into your bank account.

How To Know That Your Phone Is Hacked

The best way to determine if someone hacked your Phone is by running antivirus scans.

If you notice an unexpected change in battery or overall performance, download antivirus software and run a scan immediately.

How To Prevent Hackers from Getting into Your Phone

Here are the ways to prevent Hackers from Getting into Your Phone:

Why Does Someone Want to Hack Your Android Phone?

There are numerous reasons someone might want to hack your Android Phone.

How You can Remove a Hacker from My Phone

If a hacker did manage to get into your Phone, here’s how to remove them.