What is Artificial Intelligence (AI)?

AI (Artificial Intelligence) is a machine’s ability to perform cognitive functions as humans do, such as perceiving, learning, reasoning, and solving problems. The benchmark for AI is the human level concerning in teams of reasoning, speech, and vision.

In this Artificial Intelligence tutorial, you will learn the following AI basics-

Nowadays, AI is used in almost all industries, giving a technological edge to all companies integrating AI at scale. According to McKinsey, AI has the potential to create 600 billion dollars of value in retail bring 50 per cent more incremental value in banking compared with other analytics techniques. In transport and logistics, the potential revenue jump is 89% more.

Concretely, if an organization uses AI for its marketing team, it can automate mundane and repetitive tasks, allowing the sales representative to focus on relationship building, lead nurturing, etc. A company named Gong provides a conversation intelligence service. Each time a Sales Representative makes a phone call, the machine records, transcribes and analyzes the chat. The VP can use AI analytics and recommendation to formulate a winning strategy.

In a nutshell, AI provides cutting-edge technology to deal with complex data that a human being cannot handle. AI automates redundant jobs allowing a worker to focus on the high level, value-added tasks. When AI is implemented at scale, it leads to cost reduction and revenue increase.

Here are the main Goals of AI:

Here, are some important subfields of Artificial Intelligence:

Machine Learning: Machine learning is the art of studying algorithms that learn from examples and experiences. Machine learning is based on the idea that some patterns in the data were identified and used for future predictions. The difference from hardcoding rules is that the machine learns to find such rules.

Deep Learning: Deep learning is a sub-field of machine learning. Deep learning does not mean the machine learns more in-depth knowledge; it uses different layers to learn from the data. The depth of the model is represented by the number of layers in the model. For instance, the Google LeNet model for image recognition counts 22 layers.

Natural Language Processing: A neural network is a group of connected I/O units where each connection has a weight associated with its computer programs. It helps you to build predictive models from large databases. This model builds upon the human nervous system. You can use this model to conduct image understanding, human learning, computer speech, etc.

Fuzzy Logic: Fuzzy Logic is defined as a many-valued logic form that may have truth values of variables in any real number between 0 and 1. It is the handle concept of partial truth. In real life, we may encounter a situation where we can’t decide whether the statement is true or false. 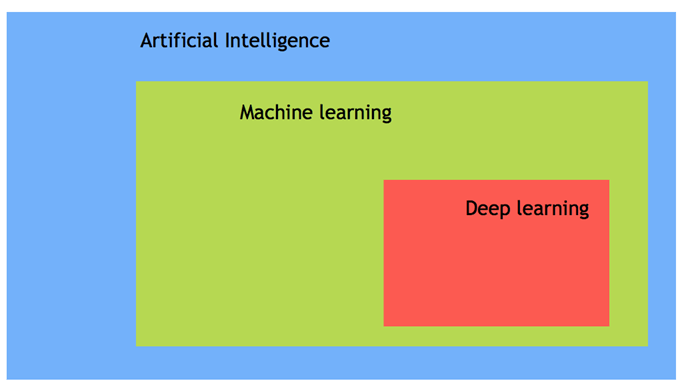 Most of our smartphone, daily device or even the internet uses Artificial Intelligence. Very often, AI and machine learning are used interchangeably by big companies that want to announce their latest innovation. However, Machine learning and AI are different in some ways.

AI- artificial intelligence- is the science of training machines to perform human tasks. The term was invented in the 1950s when scientists began exploring how computers could solve problems on their own. 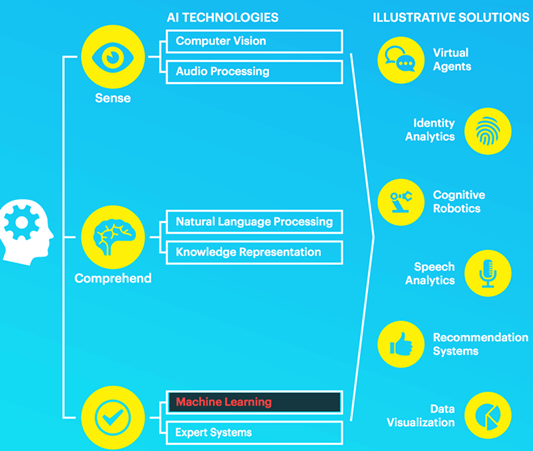 Machine learning is a distinct subset of AI that trains a machine to learn. Machine learning models look for patterns in data and try to conclude. In a nutshell, the machine does not need to be explicitly programmed by people. The programmers give some examples, and the computer is going to learn what to do from those samples.

Where is AI used? Examples

Now in this AI for beginner’s tutorial, we will learn various applications of AI:

AI is used in all industries, from marketing to supply chain, finance, food-processing sector. According to a McKinsey survey, financial services and high tech communication are leading the AI fields. 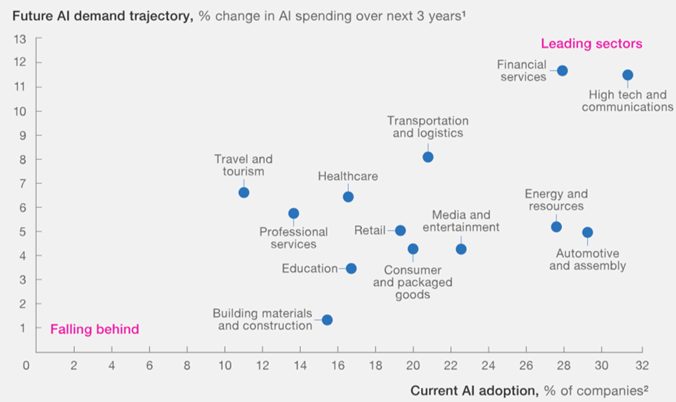 Why is AI booming now?

Now in this Artificial Intelligence testing tutorial, let’s learn why AI is booming now. Let’s understand by the below diagram. 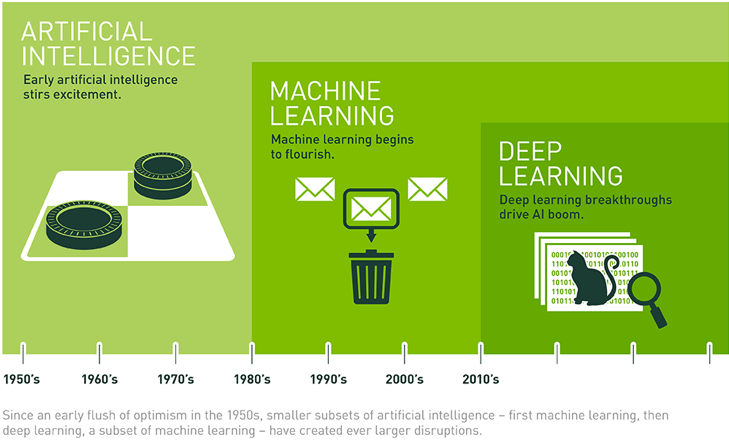 A neural network has been out since the nineties with the seminal paper of Yann LeCun. However, it started to become famous around the year 2012. Explained by three critical factors for its popularity are:

Machine learning is an experimental field, meaning it needs data to test new ideas or approaches. With the boom of the internet, data became more easily accessible. Besides, giant companies like NVIDIA and AMD have developed high-performance graphics chips for the gaming market.

In the last twenty years, the CPU’s power has exploded, allowing the user to train a small deep-learning model on any laptop. However, you need a more powerful machine to process a deep-learning model for computer vision or deep learning. Thanks to the investment of NVIDIA and AMD, a new generation of GPU (graphical processing unit) are available. These chips allow parallel computations, and the machine can separate the computations over several GPUs to speed up the calculations.

For instance, with an NVIDIA TITAN X, it takes two days to train a model called ImageNet against weeks for a traditional CPU. Besides, big companies use clusters of GPU to train deep learning models with the NVIDIA Tesla K80 because it helps to reduce the data center cost and provide better performances.

Deep learning is the structure of the model, and the data is the fluid to make it alive. Data powers artificial intelligence. Without data, nothing can be done. The latest Technologies have pushed the boundaries of data storage, and it is easier than ever to store a high amount of data in a data center.

Internet revolution makes data collection and distribution available to feed machine learning algorithms. If you are familiar with Flickr, Instagram or any other app with images, you can guess their AI potential. There are millions of pictures with tags available on these websites. Those pictures can train a neural network model to recognize an object on the picture without the need to collect and label the data manually.

Artificial intelligence combined with data is the new gold. Data is a unique competitive advantage that no firm should neglect, and AI provides the best answers from your data. When all the firms can have the same technologies, the one with data will have a competitive advantage. To give an idea, the world creates about 2.2 exabytes, or 2.2 billion gigabytes, every day.

A company needs exceptionally diverse data sources to find the patterns and learn in a substantial volume.

Hardware is more powerful than ever, data is easily accessible, but one thing that makes the neural network more reliable is the development of more accurate algorithms. Primary neural networks are a simple multiplication matrix without in-depth statistical properties. Since 2010, remarkable discoveries have been made to improve the neural network.

Artificial Intelligence uses a progressive learning algorithm to let the data do the programming. It means the computer can teach itself how to perform different tasks, like finding anomalies becoming a chatbot.