What is Natural Language Processing?

In this Natural language processing tutorial, you will learn NLP Concepts like:

Here, is are important events in the history of Natural Language Processing:

1950- Attempts to automate translation between Russian and English

1990- Probabilistic and data-driven models had become quite standard

2000- A Large amount of spoken and textual data become available

Next in this NLP tutorial, we will learn How NLP works.

How Does NLP Work?

Before we learn how NLP works, let’s understand how humans use language-

Every day, we say thousand of a word that other people interpret to do countless things. We, consider it as a simple communication, but we all know that words run much deeper than that. There is always some context that we derive from what we say and how we say it., NLP in Artificial Intelligence never focuses on voice modulation; it does draw on contextual patterns.

Here, we can see two words kings and kings where one is singular and other is plural. Therefore, when the world queen comes, it automatically co-relates with queens again singular plural.

Here, the biggest question is that how do we know what words mean? Let’s, say who will call it queen? 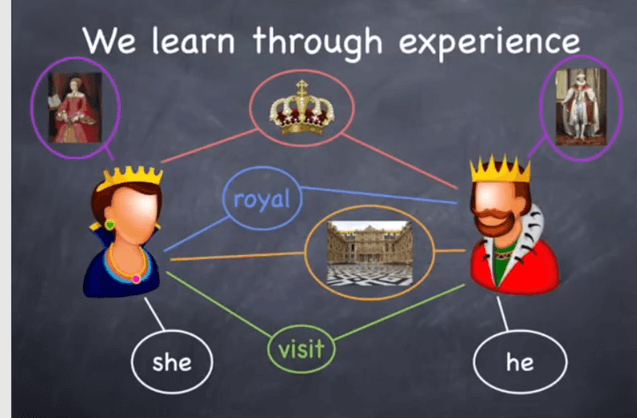 The answer is we learn this thinks through experience. However, here the main question is that how computer know about the same?

We need to provide enough data for Machines to learn through experience. We can feed details like

With above examples the machine understands the entity Queen.

The machine creates word vectors as below. A word vector is built using surrounding words. 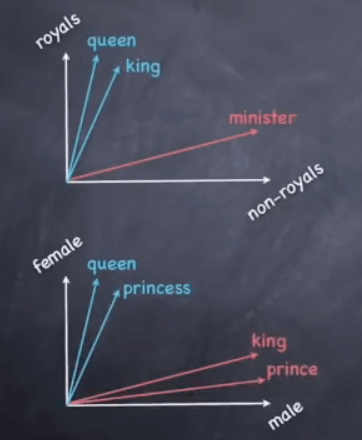 The machine creates these vectors

Here is the formula:

This amounts to performing simple algebraic operations on word vectors:

To which the machine answers queen.

Next in this Natural language processing tutorial, we will learn about Components of NLP.

Five main Component of Natural Language processing in AI are:

Lexical analysis is a vocabulary that includes its words and expressions. It depicts analyzing, identifying and description of the structure of words. It includes dividing a text into paragraphs, words and the sentences

Individual words are analyzed into their components, and nonword tokens such as punctuations are separated from the words.

Semantic Analysis is a structure created by the syntactic analyzer which assigns meanings. This component transfers linear sequences of words into structures. It shows how the words are associated with each other.

Semantics focuses only on the literal meaning of words, phrases, and sentences. This only abstracts the dictionary meaning or the real meaning from the given context. The structures assigned by the syntactic analyzer always have assigned meaning

E.g.. “colorless green idea.” This would be rejected by the Symantec analysis as colorless Here; green doesn’t make any sense.

Pragmatic Analysis deals with the overall communicative and social content and its effect on interpretation. It means abstracting or deriving the meaningful use of language in situations. In this analysis, the main focus always on what was said in reinterpreted on what is meant.

Pragmatic analysis helps users to discover this intended effect by applying a set of rules that characterize cooperative dialogues.

E.g., “close the window?” should be interpreted as a request instead of an order.

The words are commonly accepted as being the smallest units of syntax. The syntax refers to the principles and rules that govern the sentence structure of any individual languages.

Syntax focus about the proper ordering of words which can affect its meaning. This involves analysis of the words in a sentence by following the grammatical structure of the sentence. The words are transformed into the structure to show hows the word are related to each other.

It means a sense of the context. The meaning of any single sentence which depends upon that sentences. It also considers the meaning of the following sentence.

For example, the word “that” in the sentence “He wanted that” depends upon the prior discourse context.

Next in this NLP tutorial, we will learn about NLP and writing systems.

The kind of writing system used for a language is one of the deciding factors in determining the best approach for text pre-processing. Writing systems can be

Majority of the writing systems use the Syllabic or Alphabetic system. Even English, with its relatively simple writing system based on the Roman alphabet, utilizes logographic symbols which include Arabic numerals, Currency symbols (S, £), and other special symbols.

How to Implement NLP

Below, given are popular methods used for Natural Learning Process:

Machine learning: The learning nlp procedures used during machine learning. It automatically focuses on the most common cases. So when we write rules by hand, it is often not correct at all concerned about human errors.

Google, Yahoo, Bing, and other search engines base their machine translation technology on NLP deep learning models. It allows algorithms to read text on a webpage, interpret its meaning and translate it to another language.

Type in keywords to ask Questions in Natural Language.

Use of computer applications to translate text or speech from one natural language to another.

NLP helps companies to analyze a large number of reviews on a product. It also allows their customers to give a review of the particular product.

Below are the main differences between Natural Language and Computer Language: