POS Tagging (Parts of Speech Tagging) is a process to mark up the words in text format for a particular part of a speech based on its definition and context. It is responsible for text reading in a language and assigning some specific token (Parts of Speech) to each word. It is also called grammatical tagging.

Let’s learn with a NLTK Part of Speech example:

Input: Everything to permit us.

In this tutorial, you will learn –

NLTK POS Tags Examples are as below:

The above NLTK POS tag list contains all the NLTK POS Tags. NLTK POS tagger is used to assign grammatical information of each word of the sentence. Installing, Importing and downloading all the packages of POS NLTK is complete.

What is Chunking in NLP?

Chunking in NLP is a process to take small pieces of information and group them into large units. The primary use of Chunking is making groups of “noun phrases.” It is used to add structure to the sentence by following POS tagging combined with regular expressions. The resulted group of words are called “chunks.” It is also called shallow parsing.

In shallow parsing, there is maximum one level between roots and leaves while deep parsing comprises of more than one level. Shallow parsing is also called light parsing or chunking.

There are no pre-defined rules, but you can combine them according to need and requirement.

For example, you need to tag Noun, verb (past tense), adjective, and coordinating junction from the sentence. You can use the rule as below

Now Let us write the code to understand rule better

The conclusion from the above Part of Speech tagging Python example: “make” is a verb which is not included in the rule, so it is not tagged as mychunk

Use Case of Chunking

Chunking is used for entity detection. An entity is that part of the sentence by which machine get the value for any intention.

In other words, chunking is used as selecting the subsets of tokens. Please follow the below code to understand how chunking is used to select the tokens. In this example, you will see the graph which will correspond to a chunk of a noun phrase. We will write the code and draw the graph for better understanding.

Code to Demonstrate Use Case

From the graph, we can conclude that “learn” and “guru99” are two different tokens but are categorized as Noun Phrase whereas token “from” does not belong to Noun Phrase.

Chunking is used to categorize different tokens into the same chunk. The result will depend on grammar which has been selected. Further Chunking NLTK is used to tag patterns and to explore text corpora.

We have discussed various pos_tag in the previous section. In this particular tutorial, you will study how to count these tags. Counting tags are crucial for text classification as well as preparing the features for the Natural language-based operations. I will be discussing with you the approach which guru99 followed while preparing code along with a discussion of output. Hope this will help you.

How to count Tags:

Elaboration of the code

Frequency Distribution is referred to as the number of times an outcome of an experiment occurs. It is used to find the frequency of each word occurring in a document. It uses FreqDistclass and defined by the nltk.probabilty module.

A frequency distribution is usually created by counting the samples of repeatedly running the experiment. The no of counts is incremented by one, each time. E.g.

for the token in the document:

For any word, we can check how many times it occurred in a particular document. E.g.

We will write a small program and will explain its working in detail. We will write some text and will calculate the frequency distribution of each word in the text. 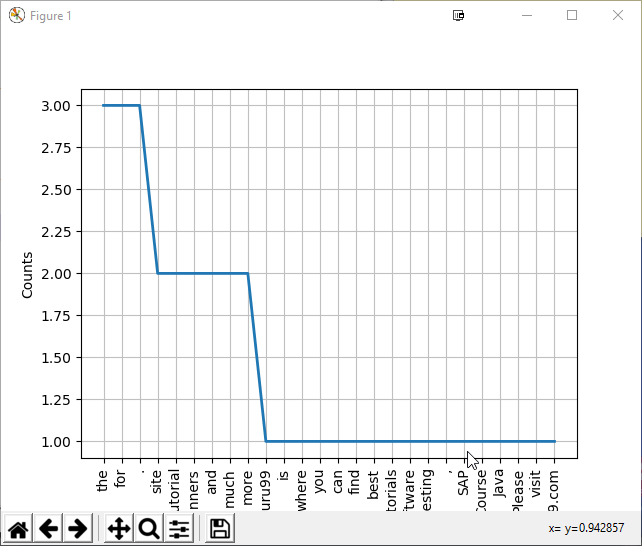 Frequency distribution of each word in the graph

NOTE: You need to have matplotlib installed to see the above graph

The key term is “tokenize.” After tokenizing, it checks for each word in a given paragraph or text document to determine that number of times it occurred. You do not need the NLTK toolkit for this. You can also do it with your own python programming skills. NLTK toolkit only provides a ready-to-use code for the various operations.

Counting each word may not be much useful. Instead one should focus on collocation and bigrams which deals with a lot of words in a pair. These pairs identify useful keywords to better natural language features which can be fed to the machine. Please look below for their details.

The words ultraviolet and rays are not used individually and hence can be treated as Collocation. Another example is the CT Scan. We don’t say CT and Scan separately, and hence they are also treated as collocation.

We can say that finding collocations requires calculating the frequencies of words and their appearance in the context of other words. These specific collections of words require filtering to retain useful content terms. Each gram of words may then be scored according to some association measure, to determine the relative likelihood of each Ingram being a collocation.

Collocation can be categorized into two types-

Bigrams and Trigrams provide more meaningful and useful features for the feature extraction stage. These are especially useful in text-based sentimental analysis.

Sometimes it becomes important to see a pair of three words in the sentence for statistical analysis and frequency count. This again plays a crucial role in forming NLP (natural language processing features) as well as text-based sentimental prediction.

The same code is run for calculating the trigrams.

Tagging Sentence in a broader sense refers to the addition of labels of the verb, noun, etc., by the context of the sentence. Identification of POS tags is a complicated process. Thus generic tagging of POS is manually not possible as some words may have different (ambiguous) meanings according to the structure of the sentence. Conversion of text in the form of list is an important step before tagging as each word in the list is looped and counted for a particular tag. Please see the below code to understand it better

In Corpus there are two types of POS taggers:

1.Rule-Based POS Tagger: For the words having ambiguous meaning, rule-based approach on the basis of contextual information is applied. It is done so by checking or analyzing the meaning of the preceding or the following word. Information is analyzed from the surrounding of the word or within itself. Therefore words are tagged by the grammatical rules of a particular language such as capitalization and punctuation. e.g., Brill’s tagger.

Tagging Problems can also be modeled using HMM. It treats input tokens to be observable sequence while tags are considered as hidden states and goal is to determine the hidden state sequence. For example x = x1,x2,…………,xn where x is a sequence of tokens while y = y1,y2,y3,y4………ynis the hidden sequence.

HMM uses join distribution which is P(x, y) where x is the input sequence/ token sequence and y is tag sequence.

Tag Sequence for x will be argmaxy1….ynp(x1,x2,….xn,y1,y2,y3,…..). We have categorized tags from the text, but stats of such tags are vital. So the next part is counting these tags for statistical study.