What is Stemming and Lemmatization in Python NLTK?

In this Stemming & Lemmatization tutorial, you will learn:

Stemming is a method of normalization of words in Natural Language Processing. It is a technique in which a set of words in a sentence are converted into a sequence to shorten its lookup. In this method, the words having the same meaning but have some variations according to the context or sentence are normalized.

In the above two sentences, the meaning is the same, i.e., riding activity in the past. A human can easily understand that both meanings are the same. But for machines, both sentences are different. Thus it became hard to convert it into the same data row. In case we do not provide the same data-set, then machine fails to predict. So it is necessary to differentiate the meaning of each word to prepare the dataset for machine learning. And here stemming is used to categorize the same type of data by getting its root word.

Let’s implement this with a Python program.NLTK has an algorithm named as “PorterStemmer”. This algorithm accepts the list of tokenized word and stems it into root word.

From the above explanation, it can also be concluded that stemming is considered as an important preprocessing step because it removed redundancy in the data and variations in the same word. As a result, data is filtered which will help in better machine training.

Now we pass a complete sentence and check for its behavior as an output.

Stemming is a data-preprocessing module. The English language has many variations of a single word. These variations create ambiguity in machine learning training and prediction. To create a successful model, it’s vital to filter such words and convert to the same type of sequenced data using stemming. Also, this is an important technique to get row data from a set of sentence and removal of redundant data also known as normalization.

Lemmatization in NLTK is the algorithmic process of finding the lemma of a word depending on its meaning and context. Lemmatization usually refers to the morphological analysis of words, which aims to remove inflectional endings. It helps in returning the base or dictionary form of a word known as the lemma.

The NLTK Lemmatization method is based on WorldNet’s built-in morph function. Text preprocessing includes both stemming as well as lemmatization. Many people find the two terms confusing. Some treat these as the same, but there is a difference between stemming vs lemmatization. Lemmatization is preferred over the former because of the below reason.

Why is Lemmatization better than Stemming?

Stemming algorithm works by cutting the suffix from the word. In a broader sense cuts either the beginning or end of the word.

On the contrary, Lemmatization is a more powerful operation, and it takes into consideration morphological analysis of the words. It returns the lemma which is the base form of all its inflectional forms. In-depth linguistic knowledge is required to create dictionaries and look for the proper form of the word. Stemming is a general operation while lemmatization is an intelligent operation where the proper form will be looked in the dictionary. Hence, lemmatization helps in forming better machine learning features.

Code to distinguish between Lemmatization and Stemming

Use Case of Lemmatizer

Lemmatizer minimizes text ambiguity. Example words like bicycle or bicycles are converted to base word bicycle. Basically, it will convert all words having the same meaning but different representation to their base form. It reduces the word density in the given text and helps in preparing the accurate features for training machine. Cleaner the data, the more intelligent and accurate your machine learning model, will be. NLTK Lemmatizer will also saves memory as well as computational cost. 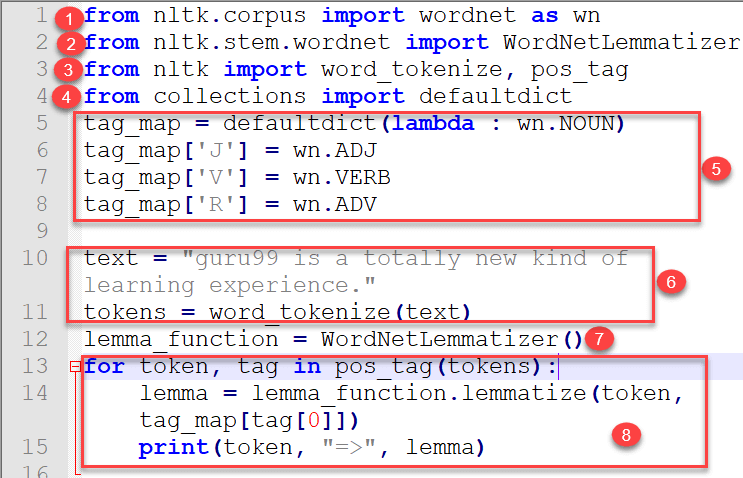 Python Lemmatization has a close relation with wordnet dictionary, so it is essential to study this topic, so we keep this as the next topic.