What Is Fuzzy Logic?

Fuzzy Logic is defined as a many-valued logic form which may have truth values of variables in any real number between 0 and 1. It is the handle concept of partial truth. In real life, we may come across a situation where we can't decide whether the statement is true or false. At that time, fuzzy logic offers very valuable flexibility for reasoning.

Fuzzy logic algorithm helps to solve a problem after considering all available data. Then it takes the best possible decision for the given the input. The FL method imitates the way of decision making in a human which consider all the possibilities between digital values T and F.

Although, the concept of fuzzy logic had been studied since the 1920's. The term fuzzy logic was first used with 1965 by Lotfi Zadeh a professor of UC Berkeley in California. He observed that conventional computer logic was not capable of manipulating data representing subjective or unclear human ideas.

Fuzzy logic has been applied to various fields, from control theory to AI. It was designed to allow the computer to determine the distinctions among data which is neither true nor false. Something similar to the process of human reasoning. Like Little dark, Some brightness, etc.

Here, are some important characteristics of fuzzy logic:

When not to use fuzzy logic

However, fuzzy logic is never a cure for all. Therefore, it is equally important to understand that where we should not use fuzzy logic.

Here, are certain situations when you better not use Fuzzy Logic:

Fuzzy Logic architecture has four main parts as shown in the diagram:

It contains all the rules and the if-then conditions offered by the experts to control the decision-making system. The recent update in fuzzy theory provides various methods for the design and tuning of fuzzy controllers. This updates significantly reduce the number of the fuzzy set of rules.

Fuzzification step helps to convert inputs. It allows you to convert, crisp numbers into fuzzy sets. Crisp inputs measured by sensors and passed into the control system for further processing. Like Room temperature, pressure, etc.

It helps you to determines the degree of match between fuzzy input and the rules. Based on the % match, it determines which rules need implment according to the given input field. After this, the applied rules are combined to develop the control actions.

At last the Defuzzification process is performed to convert the fuzzy sets into a crisp value. There are many types of techniques available, so you need to select it which is best suited when it is used with an expert system. 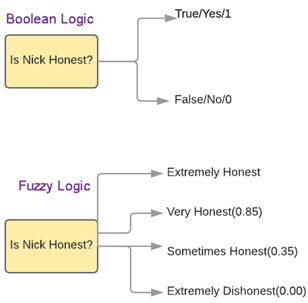 The Blow given table shows how famous companies using fuzzy logic in their products.

What is ETL? ETL is a process that extracts the data from different source systems, then...

What is Information? Information is a set of data that is processed in a meaningful way according to...

What is OLAP? Online Analytical Processing, a category of software tools which provide analysis of data...

What is Data Reconciliation? Data reconciliation (DR) is defined as a process of verification of...

Data mining is looking for hidden, valid, and all the possible useful patterns in large size data...