What is Topological Sort Algorithm?

Topological Sorting is also known as Kahn’s algorithm and is a popular Sorting Algorithm. Using a directed graph as input, Topological Sort sorts the nodes so that each appears before the one it points to.

This algorithm is applied on a DAG (Directed Acyclic Graph) so that each node appears in the ordered array before all other nodes are pointed to it. This algorithm follows some rules repeatedly until the sort is completed.

To simplify, look at the following example:

Here’s another representation of the above Graph:

So, when we pass the DAG (Directed Acyclic Graph) to the topological sort, it will give us an array with linear ordering, where the first element has no dependency. 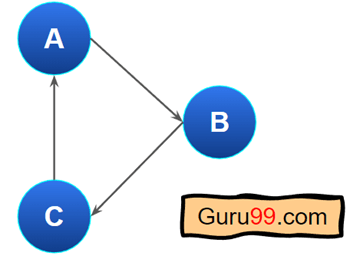 This example shows a graph with a cycle:

Here’re the steps to do this:

Step 2) Store that zeroes in-degree node in a Queue or Stack and removes the node from the Graph.

Step 3) Then delete the outgoing edge from that node.

This will decrement the in-degree count for the next node.

Topological ordering requires that the graph data structure will not have any cycle.

A graph will be considered a DAG if it follows these requirements:

As long as there’re nodes in the Graph and the Graph is still DAG, we will run the above three steps. Otherwise, the algorithm will fall into the cyclic dependency, and Kahn’s Algorithm won’t be able to find a node with zero in-degree.

Here, we will use “Kahn’s Algorithm” for the topological sort. Let’s say we have the following Graph:

Here’re the steps for Kahn’s Algorithm:

Step 1) Calculate the indegree or incoming edge of all nodes in the Graph.

Here’s the indegree and outdegree of the above Graph: 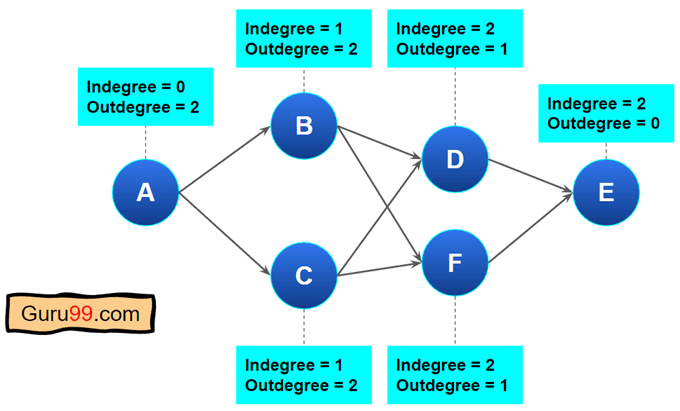 The node with zero indegree means no edges are coming toward that node. Node “A” has zero indegrees, meaning there’s no edge pointing to node “A”.

So, we will do the following actions: 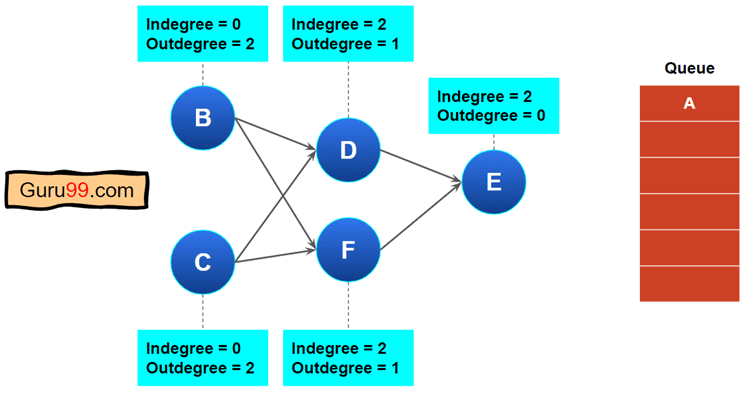 Step 3) We need to find a node with an indegree value of zero. In this example, “B” and “C” have zero indegree.

Here, we can take either of these two. Let’s take “B” and delete it from the Graph.

Then update the indegree values of other nodes.

After performing these operations, our Graph and Queue will look like the following: 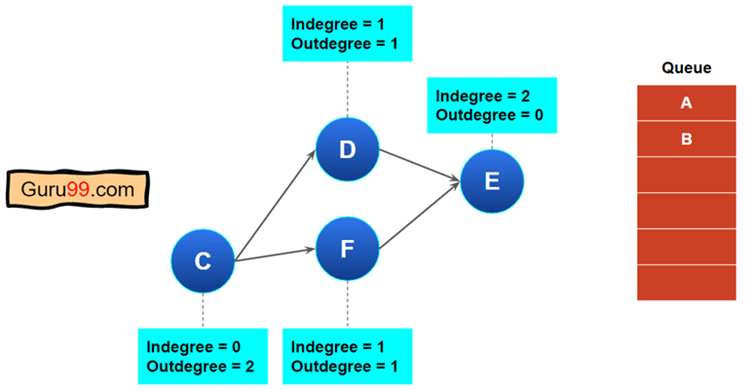 Step 4) Node “C” has no incoming edge. So, we will remove node “C” from the Graph and push it into the Queue.

We can also delete the edge that is outgoing from “C”. 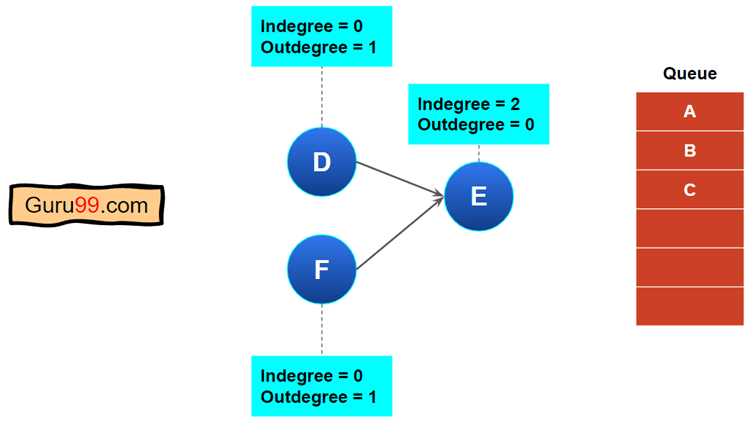 Step 5) We can see that nodes “D” and “F” have the indegree of zero. We will take a node and put it in the Queue.

We need to do the same for node “F”, our result will be like the following: 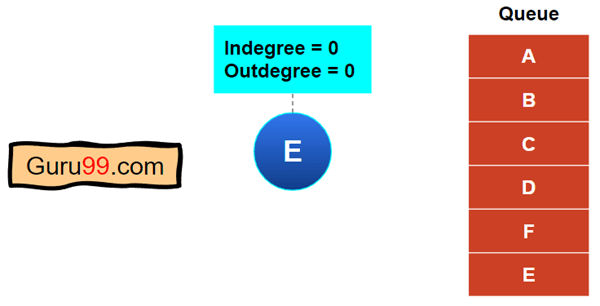 Step 6) The indegree (ingoing edges) and outdegree (outgoing edges) of node “E” became zero. So, we have met all the pre-requisite for node “E”.

Here, we l put “E” at the end of the Queue. So, we don’t have any nodes left, so the algorithm ends here.

Here’s the pseudo-code for the topological sort while using Kahn’s Algorithm.

Topological sort can also be implemented using the DFS (Depth First Search) method. However, that approach is the recursive method. Kahn’s algorithm is more efficient than the DFS approach.

A graph containing a cycle can’t be topologically ordered. As the cyclic Graph has the dependency in a cyclic manner.

For example, check this Graph:

This Graph is not DAG (Directed Acyclic Graph) because A, B, and C create a cycle. If you notice, there’s no node with zero in-degree value.

According to Kahn’s Algorithm, if we analyze the above Graph:

We can detect cycles using the topological ordering with the following steps:

Step 2) Calculate the total number of elements in the topologically sorted list.

Step 3) If the number of elements equals the total number of vertex, then there’s no cycle.

Step 4) If it’s not equal to the number of vertices, then there’s at least one cycle in the given graph data structure.

There are two types of complexity in algorithms. They’re

These complexities are represented with a function that provides a general complexity.

Let’s break through this complexity:

Step 1) At the beginning, we will calculate all the indegrees. To do that, we need to go through all the edges, and initially, we will assign all V vertex indegrees to zero. So, the incremental steps we complete will be O(V+E).

Step 2) We will find the node with zero indegree value. We need to search from the V number of the vertex. So, the steps completed will be O(V).

Step 3) For each node with zero indegrees, we will remove that node and decrement the indegree. Performing this operation for all the nodes will take O(E).

Here are the steps where we needed the space for the program:

These were the individual space complexity. So, we need to maximize these spaces in the run time.

Space complexity stands for O(V), where V means the number of the vertex in the Graph.

There’s a huge use for Topological Sorting. Here are some of them: