What is Selection Sort?

SELECTION SORT is a comparison sorting algorithm that is used to sort a random list of items in ascending order. The comparison does not require a lot of extra space. It only requires one extra memory space for the temporal variable.

In this Algorithm tutorial, you will learn:

How does selection sort work?

A list of elements that are in random order needs to be sorted in ascending order. Consider the following list as an example.

The above list should be sorted to produce the following results

Step 3) Pick the minimum value from the unpartitioned section and placed it into the sorted section.

Step 4) Repeat the process (n – 1) times until all of the elements in the list have been sorted.

Given a list of five elements, the following images illustrate how the selection sort algorithm iterates through the values when sorting them.

The first value 21 is compared with the rest of the values to check if it is the minimum value.

3 is the minimum value, so the positions of 21 and 3 are swapped. The values with a green background represent the sorted partition of the list.

The value 6 is the minimum value, so it maintains its position.

The first element of the unsorted list with the value of 9 is compared with the rest of the values to check if it is the minimum value.

The value 9 is the minimum value, so it maintains its position in the sorted partition.

The value 33 is compared with the rest of the values.

The value 21 is lower than 33, so the positions are swapped to produce the above new list.

We only have one value left in the unpartitioned list. Therefore, it is already sorted.

Run the above code produces the following results

The explanation for the code is as follows 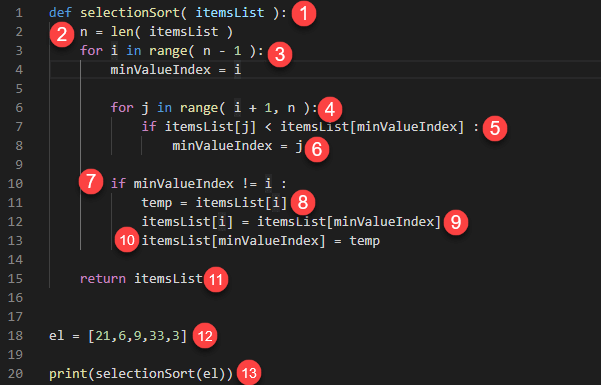 The sort complexity is used to express the number of execution times it takes to sort the list. The implementation has two loops.

The outer loop which picks the values one by one from the list is executed n times where n is the total number of values in the list.

The inner loop, which compares the value from the outer loop with the rest of the values, is also executed n times where n is the total number of elements in the list.

Therefore, the number of executions is (n * n), which can also be expressed as O(n2).

The selection sort has three categories of complexity namely;

The selection sort has a space complexity of O(1) as it requires one temporal variable used for swapping values.

When to use selection sort?

The selection sort is best used when you want to:

The following are the advantages of the selection sort

The following are the disadvantages of the selection sort.