What is a Bubble Sort?

This process is repeated until all the values in a list have been compared and swapped if necessary. Each iteration is usually called a pass. The number of passes in a bubble sort is equal to the number of elements in a list minus one.

In this Bubble Sorting in Python tutorial you will learn:

We will breakdown the implementation into three (3) steps, namely the problem, the solution, and the algorithm that we can use to write code for any language.

A list of items is given in random order, and we would like to arrange the items in an orderly manner

Iterate through the list comparing two adjacent elements and swapping them if the first value is higher than the second value.

The result should be as follows:

Step 2) Determine the number of outer passes (n – 1) to be done. Its length is list minus one

Step 4) Repeat step 3 passes until you reach the outer pass (n – 1). Get the next element in the list then repeat the process that was performed in step 3 until all the values have been placed in their correct ascending order.

Avoid unnecessary inner passes if the list or adjacent values are already sorted. For example, if the provided list already contains elements that have been sorted in ascending order, then we can break the loop early.

Optimizing the bubble sort helps us to avoid unnecessary iterations and save time and resources.

For example, if the first and second items are already sorted, then there is no need to iterate through the rest of the values. The iteration is terminated, and the next one is initiated until the process is completed as shown in the below Bubble Sort example.

Step 2) If the values have swapped positions, continue to the next iteration

Step 3) If the benefits have not swapped positions, terminate the inner loop, and continue with the outer loop.

An optimized bubble sort is more efficient as it only executes the necessary steps and skips those that are not required.

Given a list of five elements, the following images illustrate how the bubble sort iterates through the values when sorting them

The values 21 and 6 are compared to check which one is greater than the other.

The values 21 and 33 are compared to find the greater one.

The value 33 is greater than 21, so no swapping takes place.

The values 33 and 3 are compared to find the greater one.

The value 33 is greater than 3, so we swap their positions.

The new list after the second iteration is as follows

The new list after the third iteration is as follows

The new list after the fourth iteration is as follows

The following code shows how to implement the Bubble Sort algorithm in Python. 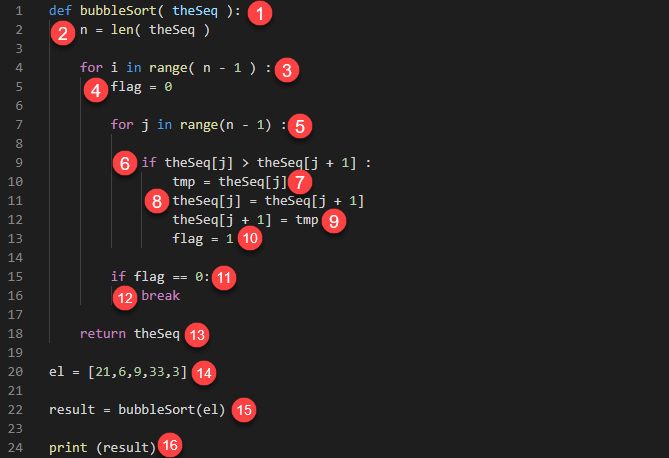 There are three types of Complexity are:

The sort complexity is used to express the amount of execution times and space that it takes to sort the list. The bubble sort makes (n – 1) iterations to sort the list where n is the total number of elements in the list.

The time complexity of the bubble sort is O(n2)

The time complexities can be categorized as: