What is Spike Testing? Learn With Example 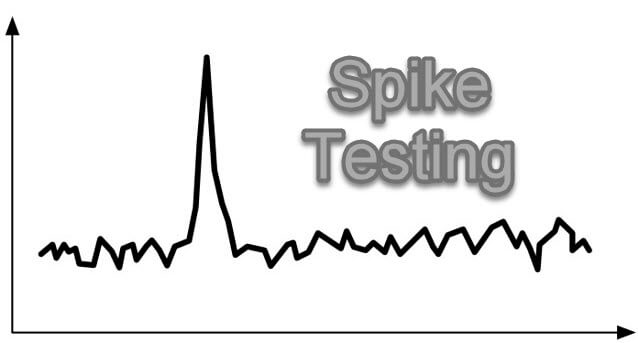 In this tutorial, we will learn-

The goal of Spike testing is to see how the system responds to unexpected rise and fall of the user load. In Software Engineering Spike testing helps determine system performance will deterioration when there is a sudden high load.

Another goal of Spike Testing is to determine the recovery time. Between two successive spikes of user load, the system needs some time to stabilize. This recovery time should be as low as possible.

How to do Spike Testing?

Step 2) Prepare the Testing Environment and configure it to record performance parameters.

Step 4) Rapidly increase in load, to the system for a set period.

Step 5) Gradually reduce the load back to its original level.

Three main recovery scenarios can be configured to guard against spikes

Advantages and Disadvantages of Spike testing

Loadrunner is a load testing tool for Windows and Linux, which allows spike testing of web and other apps. It helps to determine the performance and result of the application even under the heavy load.

{loadposition top-ads-automation-testing-tools} There are tons of Software Development tools and...

What is SDLC? SDLC is a systematic process for building software that ensures the quality and...