What is R Software?

R is a programming language and free software developed by Ross Ihaka and Robert Gentleman in 1993. R possesses an extensive catalog of statistical and graphical methods. It includes machine learning algorithms, linear regression, time series, statistical inference to name a few. Most of the R libraries are written in R, but for heavy computational tasks, C, C++ and Fortran codes are preferred.

R is not only entrusted by academic, but many large companies also use R programming language, including Uber, Google, Airbnb, Facebook and so on.

Data analysis with R is done in a series of steps; programming, transforming, discovering, modeling and communicate the results

In this introduction tutorial you will learn R

What is R used for?

If we break down the use of R by industry, we see that academics come first. R is a language to do statistic. R is the first choice in the healthcare industry, followed by government and consulting. 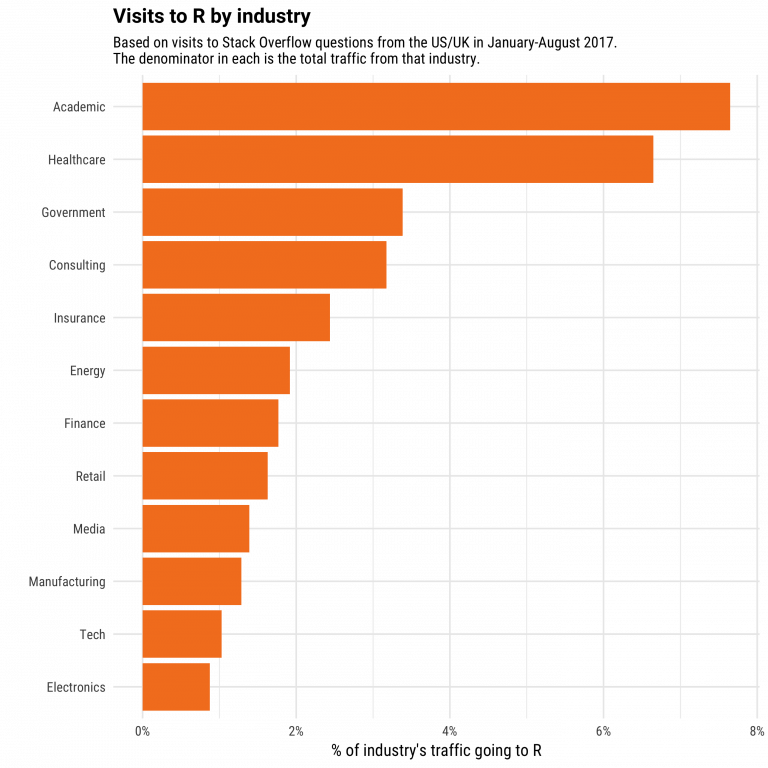 The primary uses of R is and will always be, statistic, visualization, and machine learning. The picture below shows which R package got the most questions in Stack Overflow. In the top 10, most of them are related to the workflow of a data scientist: data preparation and communicate the results. 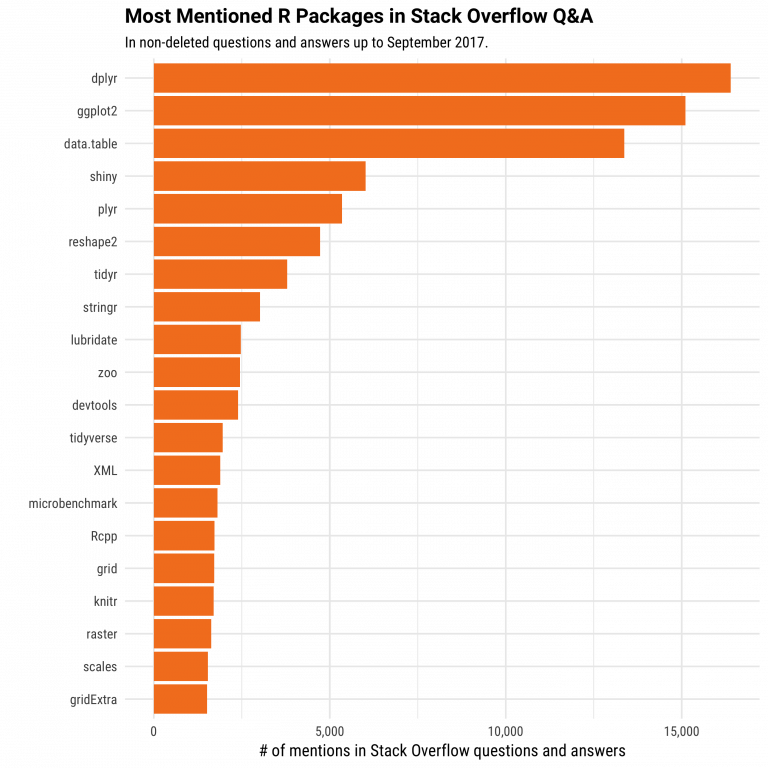 All the libraries of R, almost 12k, are stored in CRAN. CRAN is a free and open source. You can download and use the numerous libraries to perform Machine Learning or time series analysis. 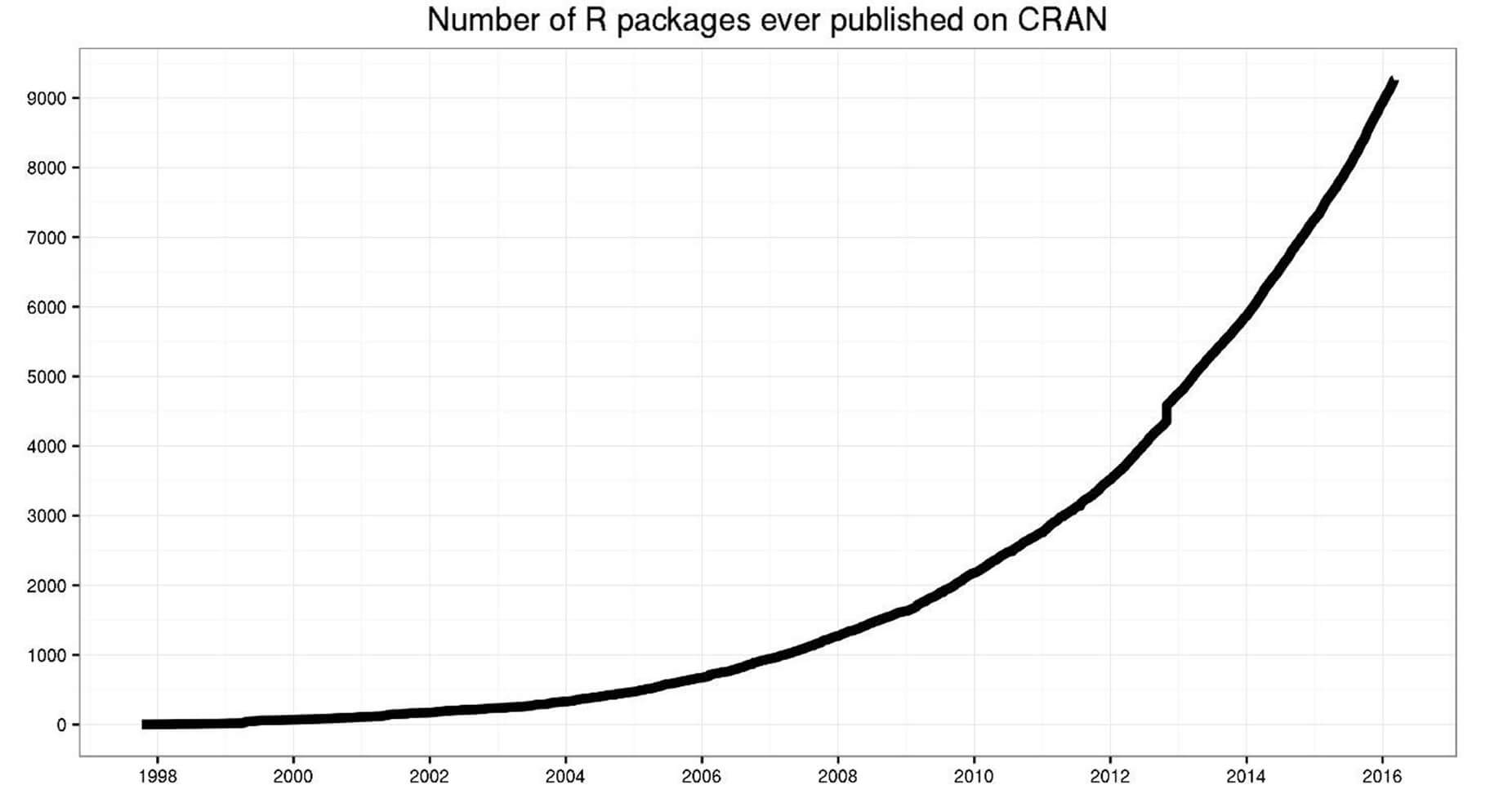 R has multiple ways to present and share work, either through a markdown document or a shiny app. Everything can be hosted in Rpub, GitHub or the business’s website.

Below is an example of a presentation hosted on Rpub 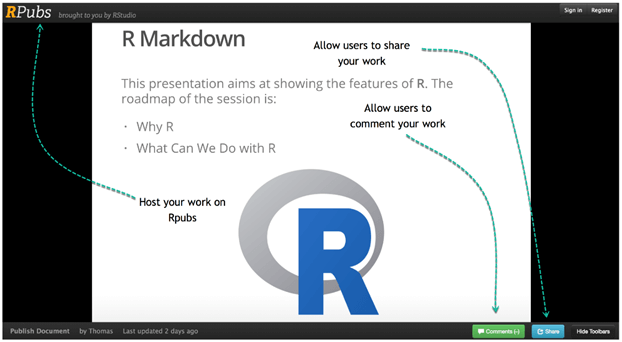 Rstudio accepts markdown to write a document. You can export the documents in different formats: 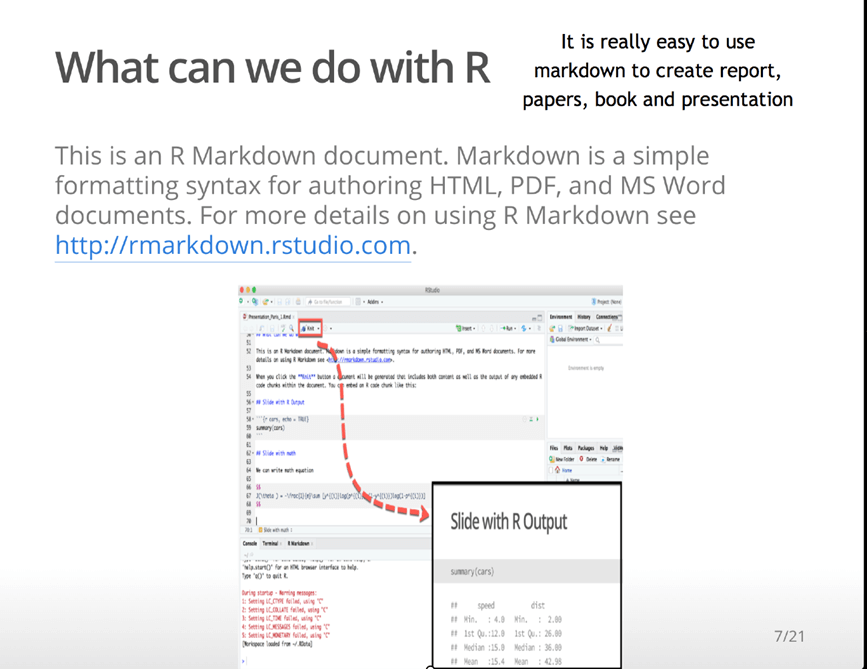 Rstudio has a great tool to create an App easily. Below is an example of app with the World Bank data. 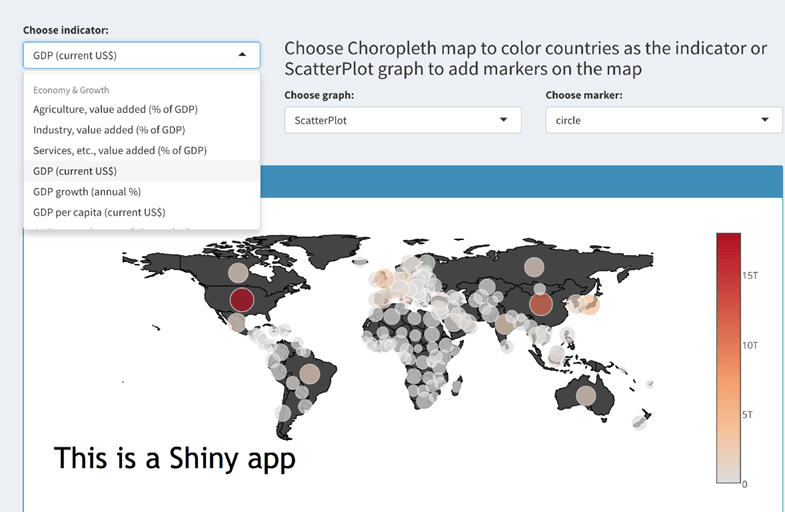 Data science is shaping the way companies run their businesses. Without a doubt, staying away from Artificial Intelligence and Machine will lead the company to fail. The big question is which tool/language should you use?

They are plenty of tools available in the market to perform data analysis. Learning a new language requires some time investment. The picture below depicts the learning curve compared to the business capability a language offers. The negative relationship implies that there is no free lunch. If you want to give the best insight from the data, then you need to spend some time learning the appropriate tool, which is R. 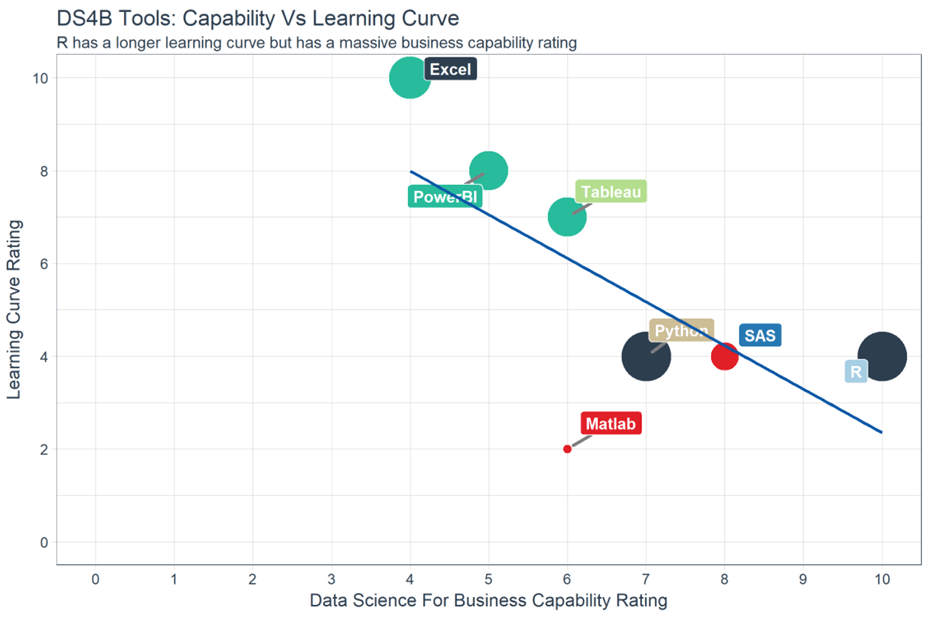 On the top left of the graph, you can see Excel and PowerBI. These two tools are simple to learn but don’t offer outstanding business capability, especially in term of modeling. In the middle, you can see Python and SAS. SAS is a dedicated tool to run a statistical analysis for business, but it is not free. SAS is a click and run software. Python, however, is a language with a monotonous learning curve. Python is a fantastic tool to deploy Machine Learning and AI but lacks communication features. With an identical learning curve, R is a good trade-off between implementation and data analysis.

Stack Overflow is a big community for programming languages. If you have a coding issue or need to understand a model, Stack Overflow is here to help. Over the year, the percentage of question-views has increased sharply for R compared to the other languages. This trend is of course highly correlated with the booming age of data science but, it reflects the demand of R language for data science. 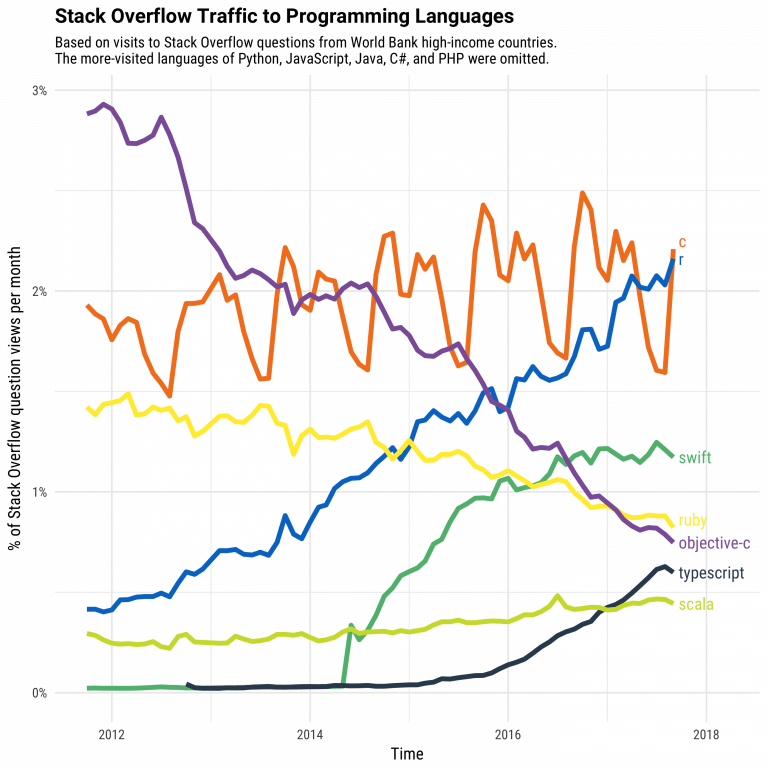 In data science, there are two tools competing with each other. R and Python are probably the programming language that defines data science.

Should you choose R?

Data scientist can use two excellent tools: R and Python. You may not have time to learn them both, especially if you get started to learn data science. Learning statistical modeling and algorithm is far more important than to learn a programming language. A programming language is a tool to compute and communicate your discovery. The most important task in data science is the way you deal with the data: import, clean, prep, feature engineering, feature selection. This should be your primary focus. If you are trying to learn R and Python at the same time without a solid background in statistics, its plain stupid. Data scientist are not programmers. Their job is to understand the data, manipulate it and expose the best approach. If you are thinking about which language to learn, let’s see which language is the most appropriate for you.

The principal audience for data science is business professional. In the business, one big implication is communication. There are many ways to communicate: report, web app, dashboard. You need a tool that does all this together.

Years ago, R was a difficult language to master. The language was confusing and not as structured as the other programming tools. To overcome this major issue, Hadley Wickham developed a collection of packages called tidyverse. The rule of the game changed for the best. Data manipulation become trivial and intuitive. Creating a graph was not so difficult anymore.

R can communicate with the other language. It is possible to call Python, Java, C++ in R. The world of big data is also accessible to R. You can connect R with different databases like Spark or Hadoop.

Finally, R has evolved and allowed parallelizing operation to speed up the computation. In fact, R was criticized for using only one CPU at a time. The parallel package lets you to perform tasks in different cores of the machine.

In a nutshell, R is a great tool to explore and investigate the data. Elaborate analysis like clustering, correlation, and data reduction are done with R. This is the most crucial part, without a good feature engineering and model, the deployment of the machine learning will not give meaningful results.