What is .Net Framework?

.Net Framework is a software development platform developed by Microsoft for building and running Windows applications. The .Net framework consists of developer tools, programming languages, and libraries to build desktop and web applications. It is also used to build websites, web services, and games.

.Net Framework Architecture is a programming model for the .Net platform that provides an execution environment and integration with various programming languages for simple development and deployment of various Windows and desktop applications. It consists of class libraries and reusable components.

The basic architecture of the .Net framework is as shown below.

The architecture of .Net framework is based on the following key components;

The “Common Language Infrastructure” or CLI is a platform in .Net architecture on which the .Net programs are executed.

The CLI has the following key features:

Exception Handling – Exceptions are errors which occur when the application is executed.

Examples of exceptions are:

Garbage Collection – Garbage collection is the process of removing unwanted resources when they are no longer required.

Examples of garbage collection are

As noted in an earlier section, a developer can develop an application in a variety of .Net programming languages. 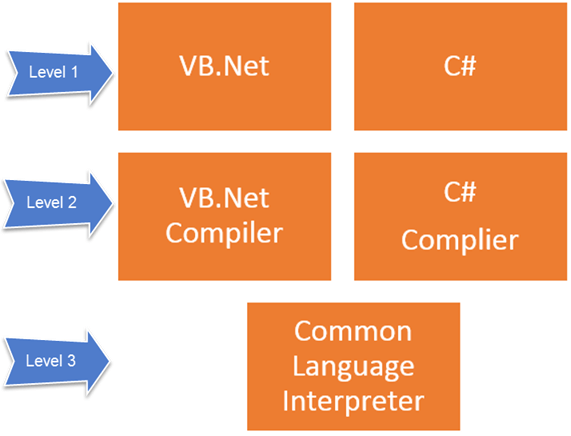 The .NET Framework includes a set of standard class libraries. A class library is a collection of methods and functions that can be used for the core purpose.

A namespace is a logical separation of methods. We will learn these namespaces more in detail in the subsequent chapters.

The types of applications that can be built in the .Net framework is classified broadly into the following categories.

ASP.Net – This is used for developing web-based applications, which are made to run on any browser such as Internet Explorer, Chrome or Firefox.

ADO.Net – This technology is used to develop applications to interact with Databases such as Oracle or Microsoft SQL Server.

Microsoft always ensures that .Net frameworks are in compliance with all the supported Windows operating systems.

Now in this .Net Architecture tutorial, we will learn the design priciples of .Net framework. The following design principles of the .Net framework is what makes it very relevant to create .Net based applications.

2) Portability – Applications built on the .Net framework can be made to work on any Windows platform. And now in recent times, Microsoft is also envisioning to make Microsoft products work on other platforms, such as iOS and Linux.

4) Memory management – The Common Language runtime does all the work or memory management. The .Net framework has all the capability to see those resources, which are not used by a running program. It would then release those resources accordingly. This is done via a program called the “Garbage Collector” which runs as part of the .Net framework. The garbage collector runs at regular intervals and keeps on checking which system resources are not utilized, and frees them accordingly.