What is Software Testing Methodology? 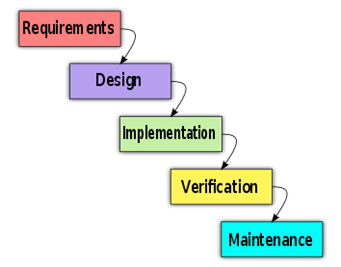 In this model, the next phase begins only when the earlier phase is completed.

The first phase in the waterfall model is the requirements phase in which all the project requirements are completely defined before starting the testing. During this phase, the test team brainstorms the scope of testing, test strategy and drafts a detailed test plan.

Only once the design of software is complete, the team will move on to execution of the test cases to ensure that the developed software behaves as it expected.

In this methodology, the testing team proceeds to the next phase only when the previous phase is completed.

This software Engineering model is very simple to plan and manage. Hence, projects, where requirements are clearly defined and stated beforehand, can be easily tested using a waterfall model.

In the waterfall model, you can begin with the next phase only once the previous phase is completed. Hence, this model cannot accommodate unplanned events and uncertainty.

This methodology is not suitable for projects where the requirements change frequently.

In this model, a big project is divided into small parts, and each part is subjected to multiple iterations of the waterfall model. At the end of an iteration, a new module is developed or an existing module is enhanced. This module is integrated into the software architecture and the entire system is tested all together

What is the testing Approach?

As soon as iteration is completed, the entire system is subjected to testing. Feedback from testing is immediately available and is incorporated in the next cycle. The testing time required in successive iteration can be reduced based on the experience gained from past iterations.

The main advantage of iterative development is the test feedback is immediately available at the end of each cycle.

This model increases communication overheads significantly since, at the end of each cycle, feedback about deliverables, effort etc must be given.

Traditional software development methodologies work on the premise that software requirements remain constant throughout the project. But with an increase in complexity, the requirements undergo numerous changes and continuously evolve. At times, the customer himself is not sure what he wants. Though the iterative model addresses this issue, it’s still based on the waterfall model.

In Agile methodology, software is developed in incremental, rapid cycles. Interactions amongst customers, developers and client are emphasized rather than processes and tools. The agile methodology focuses on responding to change rather than extensive planning.

Incremental testing is used in agile development methods and hence, every release of the project is tested thoroughly. This ensures that any bugs in the system are fixed before the next release.

It is possible to make changes in the project at any time to comply with the requirements.

Constant client interaction means added time pressure on all stakeholders including the client themselves, software development and test teams.

Extreme programming is a type of agile methodology which beliefs in short development cycles. A project is divided into simple engineering tasks. Programmers code a simple piece of software and get back to the customer for feedback. Review points from the customer are incorporated and the developers proceed with the next task.

Extreme Programming is used in places where customer requirements are constantly changing.

Meetings amongst the software development team and clients add to time requirements.

Which Software Methodology to choose?

There are tons of methodologies available for software development and its corresponding testing. Each testing technique and methodology is designed for a specific purpose and has its relative merits and demerits.

Selection of a particular methodology depends on many factors such as the nature of a project, client requirement, project schedule, etc.

From a testing perspective, some methodologies push for testing input early in the development life cycle, while others wait until a working model of the system is ready.

How to setup software testing methodologies?

Realistic scheduling is the key to the implementation of successful testing methodology and the schedule should meet the needs of every member of the team.

Once scheduling is complete and defined deliverables are made available, the testing team should be able to formulate the right test approach. Definition documents and developer meetings should indicate the team about the best test approach that can be used for the project.

Transparent reporting is very difficult to achieve, but this step determines the effectiveness of the testing approach used in the project.