What is State Transition Testing?

State Transition Testing is a black box testing technique in which changes made in input conditions cause state changes or output changes in the Application under Test(AUT). State transition testing helps to analyze behaviour of an application for different input conditions. Testers can provide positive and negative input test values and record the system behavior.

It is the model on which the system and the tests are based. Any system where you get a different output for the same input, depending on what has happened before, is a finite state system.

When to Use State Transition?

When to Not Rely On State Transition?

2) Transition from one state to another

4) Actions that result from a transition (an error message or being given the cash.)

In state transition diagram the states are shown in boxed texts, and the transition is represented by arrows. It is also called State Chart or Graph. It is useful in identifying valid transitions.

In state transition table all the states are listed on the left side, and the events are described on the top. Each cell in the table represents the state of the system after the event has occurred. It is also called State Table. It is useful in identifying invalid transitions.

Let’s consider an ATM system function where if the user enters the invalid password three times the account will be locked. 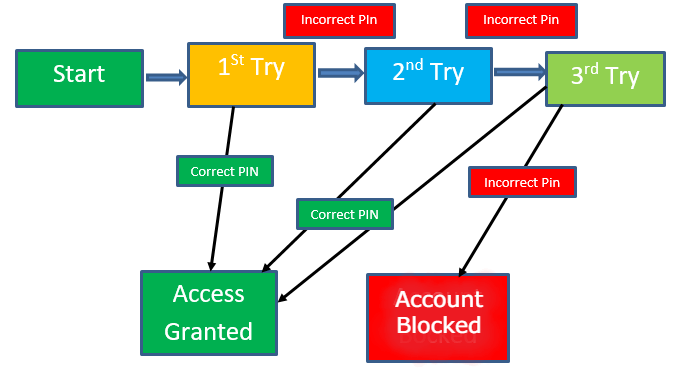 In the table when the user enters the correct PIN, state is transitioned to S5 which is Access granted. And if the user enters a wrong password he is moved to next state. If he does the same 3rd time, he will reach the account blocked state.

Check this State Transition Testing video, before you refer the example below:

The State Graphs helps you determine valid transitions to be tested. In this case, testing with the correct password and with an incorrect password is compulsory. For the test scenarios, log-in on 2nd, 3rd and 4th attempt anyone could be tested.

You can use State Table to determine invalid system transitions. 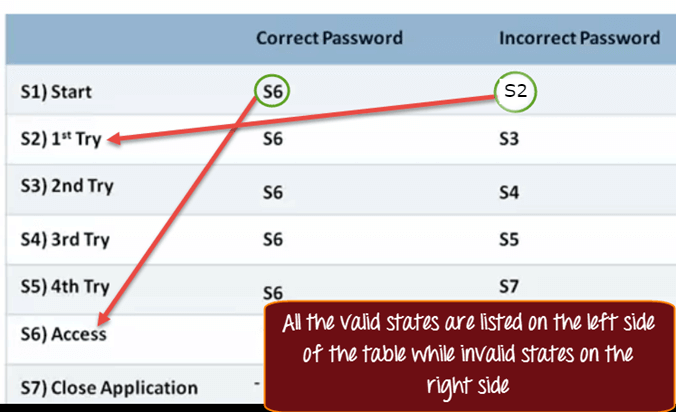 In a State Table, all the valid states are listed on the left side of the table, and the events that cause them on the top.

Each cell represents the state system will move to when the corresponding event occurs.

For example, while in S1 state you enter a correct password you are taken to state S6 (Access Granted). Suppose if you have entered the wrong password at first attempt you will be taken to state S3 or 2nd Try.

Likewise, you can determine all other states.

Two invalid states are highlighted using this method. Suppose you are in state S6 that is you are already logged into the application, and you open another instance of flight reservation and enter valid or invalid passwords for the same agent. System response for such a scenario needs to be tested.