What is Reliability Testing?

Reliability Testing is a software testing process that checks whether the software can perform a failure-free operation in a particular environment for a specified time period. The purpose of Reliability testing is to assure that the software product is bug-free and reliable enough for its expected purpose.

Reliability means “yielding the same,” in other terms, the word “reliable” means something is dependable and that it will give the same outcome every time. The same is true for Reliability testing.

The probability that a PC in a store is up and running for eight hours without crashing is 99%; this is referred to as reliability.

Reliability Testing can be categorized into three segments,

The following formula is for calculating the probability of failure. 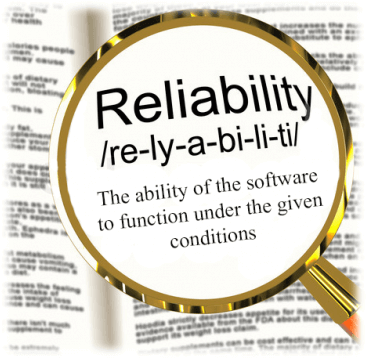 Reliability Testing is one of the keys to better software quality. This testing helps discover many problems in the software design and functionality.

The main purpose of reliability testing is to check whether the software meets the requirement of customer reliability.

Reliability testing will be performed at several levels. Complex systems will be tested at the unit, assembly, subsystem, and system levels.

Why do Reliability Testing?

Reliability testing is done to test the software performance under the given conditions.

The objective behind performing reliability testing are,

After the release of the product too, we can minimize the possibility of the occurrence of defects and thereby improve the software reliability. Some of the tools useful for this are- Trend Analysis, Orthogonal Defect Classification, and formal methods, etc.

Featured Testing checks the feature provided by the software and is conducted in the following steps:-

Usually, the software will perform better at the beginning of the process, and after that, it will start degrading. Load Testing is conducted to check the performance of the software under the maximum workload.

Regression testing is mainly used to check whether any new bugs have been introduced because of fixing previous bugs. Regression Testing is conducted after every change or update of the software features and their functionalities.

How to do Reliability Testing

Reliability Testing is costly compared to other types of testing. So Proper planning and management is required while doing reliability testing. This includes the testing process to be implemented, data for the test environment, test schedule, test points, etc.

To begin with reliability testing, the tester has to keep following things,

As we discussed earlier, there are three categories in which we can perform Reliability Testing,- Modeling, Measurement, and Improvement.

The key parameters involved in Reliability Testing are:-

Software Modeling Technique can be divided into two subcategories:

Product metrics are the combination of 4 types of metrics:

The quality of the product is directly related to the process. Process metrics can be used to estimate, monitor, and improve the reliability and quality of software.

Fault and Failure Metrics are mainly used to check whether the system is completely failure-free. Both the types of faults found during the testing process (i.e. before delivery) as well as the failure reported by users after delivery are collected, summarized, and analyzed to achieve this goal.

Software reliability is measured in terms of the mean time between failures (MTBF). MTBF consists of

Reliability for good software is a number between 0 and 1.

Reliability increases when errors or bugs from the program are removed.

Improvement completely depends upon the problems occurred in the application or system, or else the characteristics of the software. According to the complexity of the software module, the way of improvement will also differ. Two main constraints, time and budget will limit the efforts put into software reliability improvement.

Testing for reliability is about exercising an application to discover and remove failures before the system is deployed.

There are mainly three approaches used for Reliability Testing

Below we tried to explain all these with an example. 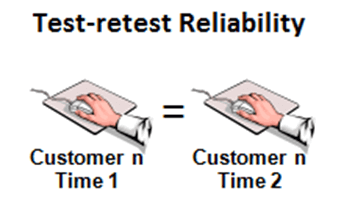 To estimate test-retest reliability, a single group of examinees will perform the testing process only a few days or weeks apart. The time should be short enough so that the examinee’s skills in the area can be assessed. The relationship between the examinee’s scores from two different administrations is estimated through statistical correlation. This type of reliability demonstrates the extent to which a test is able to produce stable, consistent scores across time. 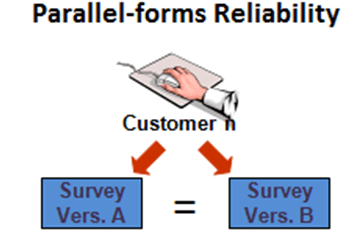 Many exams have multiple formats of question papers, these parallel forms of exam provide Security. Parallel forms reliability is estimated by administrating both forms of the exam to the same group of examinees. The examinee’s scores on the two test forms are correlated in order to determine how similar the two test forms function. This reliability estimate is a measure of how consistent examinees’ scores can be expected across test forms.

After doing Test-Retest Reliability and Parallel Form Reliability, we will get a result of examinees either passing or failing. The reliability of this classification decision is estimated in decision consistency reliability.

A thorough assessment of reliability is required to improve the performance of software products and processes. Testing software reliability will help software managers and practitioners to a great extent.

To check the reliability of the software via testing:-

In Software Engineering, Reliability Testing can be categorized into three segments,