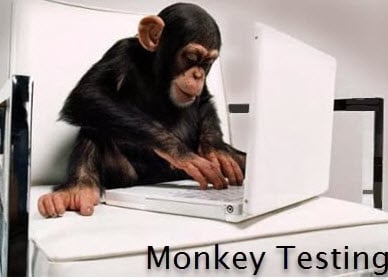 What is Gorilla Testing?

Gorilla Testing is a Software testing technique wherein a module of the program is repeatedly tested to ensure that it is working correctly and there is no bug in that module.

A module can be tested over a hundred times, and in the same manner. So, Gorilla Testing is also known as “Frustrating Testing”.

One can consider that Monkey Testing, Gorilla Testing, and Ad-hoc Testing are same as there are some similar facts present in all of them but the real fact is that they are different from each other… how?

We will first see the difference between Monkey and Gorilla Testing. First be clear with it to avoid confusion.

Once get cleared with this difference have a look towards next;

Monkey Testing is further divided into several categories according to its way of implementation, See the following diagram for a quick idea of it;

Monkey Testing can also be performed for Android even. Monkey Testing may get efficient with the use of tools. Even it can be used to find more bugs like other testing types. If we use tool for Monkey Testing what could be the general process followed for it? Just have a quick look;

The process of Monkey Testing can be automated even with the use of tools but as it is some sort of new kind of testing introduced and not yet established on industry level these tools have less identity, unlike others. This situation may get changed with coming era of Testing Process then we will have look towards the upcoming impact of Monkey testing and its significant effect on industry standards. This is an introductory tutorial for Monkey Testing to cover basic idea about it.