Here are IoT interview questions for fresher as well as experienced candidates to get their dream job.

1) What is the Internet Of Things (IoT)?

Internet of Things (IoT) is a network of physical objects or people called “things” that are embedded with software, electronics, network, and sensors that allow these objects to collect and exchange data. The goal of IoT is to extend to internet connectivity from standard devices like computer, mobile, tablet to relatively dumb devices like a toaster.

Raspberry Pi is a computer which is capable of doing all the operations like a conventional computer. It has other features such as onboard WiFi, GPIO pins, and Bluetooth in order to communicate with external things.

3) How to run Raspberry pi in headless mode?

Raspberry pi in headless mode can be run by using SSH. The latest operating system has an inbuilt VNC server that is installed for taking remote desktop on Raspberry Pi.

4) What are the fundamental components of IoT? 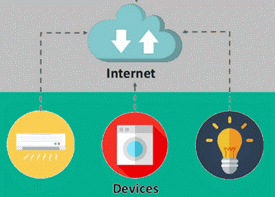 The four fundamental components of an IoT system are:

5) What is the difference between IoT and IIoT?

The difference between IoT and IIoT is:

7) What are the disadvantages of IoT?

The disadvantages of IoT are:

Arduino is a free electronics platform having easy to use hardware and software. It has a microcontroller capable of reading input from sensors to control the motors programmatically.

10) Mention the basic difference between IoT and sensor businesses?

A sensor business does not need an active internet connection to work. Internet of Things requires a control side to work.

11) What are the advantages of IoT?

Key benefits of IoT technology are as follows:

12) What is Bluegiga APX4 protocol?

The Bluegiga APX4 is a solution that supports both the WiFI and BLE platform, and it is based on a 450MHz ARM9 processor.

13) What are the most common IoT applications?

The most common IoT applications are:

14) What is Pulse Width Modulation?

PWM or Pulse Width Modulation is a variation of how much time the signal is high in an analog fashion. The signal can be high or low, and the user can even change the proportion of the time.

15) Mention applications of PWM in IoT

17) What are the functions used to read analog and digital data from a sensor in Arduino?

Functions used to read analog and digital data from a sensor in Arduino are: digitalRead() and digitalWrite().

18) What is Bluetooth Low Energy?

MicroPython is a Python implementation, which includes a small subset of its standard library. It can be optimized to run on the ModeMCU microcontroller.

Models of Raspberry Pi are:

21) What are the challenges of IoT?

Important challenges of IoT are:

22) Mention some of the commonly used water sensors

The commonly used water sensors are:

23) Differentiate between Arduino and Raspberry pi

The difference between Arduino and Raspberry pi is:

24) What are mostly used IoT protocols?

The mostly used IoT protocols are:

25) What are IoT publishers?

IoT Publishers are sensors that send real-time data to intermediate devices or middleware.

Arduino library is a collection of code that is already written for controlling module or sensor.

27) Mention some of the wearable Arduino boards

Replication is the act of syncing data between two or more servers.

Thingworx is a platform for the fast development and deployment of connected devices. It is a collection of integrated IoT development tools that support analysis, production, property, and alternative aspects of IoT development.

30) What is Salesforce IoT Cloud?

The Salesforce IoT Cloud is an online platform for storing and processing IoT information.

It is an assortment of various application development elements, which are called lightning.

This program gathers information from websites, devices, customers, and partners. It then triggers actions for period responses.

GE or General Electric Predix is a software for the information assortment from industrial instruments. It offers a PaaS which allows users performance management and operation optimization facility. It connects instrumentation, people, and information in an exceedingly conventional technique.

32) List out Some popular companies are working on IoT

33) What are various types are of CAN Frame?

34) What is the main difference between floating CPU and fixed-point CPU?

Floating CPU can take floating value directly, whereas fixed CPU is converted to integer format. Thereby, it leads to the loss of some resolution.

GPIO is a programmable pin that can be used to control input or output pins programmatically.

Android things is an Android-based OS that is built for embedded devices.

37) What is the aim of airflow sensors?

The main aim of airflow sensors is to measure the air level in the soil. This sensor enables one to measure it dynamically, from one location, or multiple locations of the garden.

Suitable databases for IoT are:

39) Why use the scheduler in RTOS?

Scheduler in RTOS is used for switching one task to another.

IoT Contiki is software that targets explicitly little devices connected with the Internet. It is used with process power bandwidth, power, and restricted memory. Contiki helps for the management of programs, resources, processes, communication, and memory.

Data in IoT refers to the information that is collected by the installed devices at any building.

44) What is a crystal oscillator?

A crystal oscillator is the main part of the microprocessor. It executes every single pulse one instruction in CPU.

45) What is the importance of the Internet of Everything?

Internet of Everything is important because:

The full form of WSN is Wireless Sensor Network. It is a network of notes, design to observe and to study physical parameters of the application.

Zigbee is the same like Bluetooth. It used in a complex system for low power operation, robustness, and high security.

Z-Wave is an IoT technology that uses low power RF communication. It is designed for home automation products like lamp controllers and sensors.

49) How to install a new library in Arduino?

A new library in Arduino can be installed by selecting the library from the sketch option in Toolbar.

The full form of MQTT is Message Queue Telemetry Transport Protocol. It is a messaging protocol that is used for tracking devices in IoT.

52) What are the operating systems supported by Pi?

Operating systems supported by Pi are:

53) How to reduce the size of the sketch?

Reducing the size of the sketch is can be reduced by removing unwanted libraries from the code and make code short and simple.

54) What are the various types of antennas designed for IoT devices?

Various types of antennas designed for IoT devices are:

55) What is the difference between M2M and IoT?

The difference between M2M and IoT is:

56) What are the features of influxDB?

Features of influxDB are:

57) How to program Arduino?

Programmers can use the Arduino IDE in order to write an Arduino program. Developers can also use Node.js Johny five-module in order to control Arduino.

58) What are IoT testing tools?

IoT testing tools can be divided into hardware and software:

59) How to store the high-volume file into Arduino?

A specification called Gridfs can be used for storing high volume file into Arduino.

Shodan is an IOT testing tool that can be used to discover which of your devices are connected to the Internet. It allows you to keep track of all the computers which are directly accessible from the Internet.

IOT thing is an item having an embedded and connected computing device.

A Thermocouple is a device which consists of two different conductors joined together to form an electrical junction.

64) Mention some examples of MEMS sensor

65) What are IoT test approaches?

Sharding is a method to split data into collections and stored in machines.

IoT testing is a type of testing to check IoT devices. Today there is an increasing need to deliver better and faster services. There is a huge demand to access, create, use, and share data from any device. The thrust is to provide greater insight and control over various interconnected IoT devices. Hence, the IoT testing framework is important.

There are two types of IoT:

Thingful is a search engine for the Internet of Things. It allows secure interoperability between millions of IoT objects via the Internet. This IOT testing tool also to control how data is used and empowers to take more decisive and valuable decisions.

71) What are interrupts in Arduino?

Interrupts enable specific tasks to process in the background and are enabled by default. Its main job is to ensure the device processor responds fastly to essential events.

72) What is Asset Tracking?

Asset Tracking or Asset management is the process of keeping track of physical assets and information.

73) What are the risks associated with the IOE Internet of Everything?

Risks associated with IOE are 1) Privacy, 2) Security, 3) Network congestion, and 4) Electricity consumption at the peaks.

74) What is the basic difference between the IoT network and Wireless Sensor Network?

Wireless Sensor Network things connected to the wireless network and gather some monitoring environment or data. IoT contains a combination of:

75) What is the importance of the network in IoT?

The network is the main part of the IoT. It is responsible for providing a practical and smart system that makes strong infrastructure. The network offers scalability to help devices coordinate with other lines with the Internet.

76) What is the connection between IoT and sensors in the commercial enterprise?

77) Explain the types of testing in IoT?