What is the TCP/IP Model?

TCP/IP Model helps you to determine how a specific computer should be connected to the internet and how data should be transmitted between them. It helps you to create a virtual network when multiple computer networks are connected together. The purpose of TCP/IP model is to allow communication over large distances.

In this TCP/IP tutorial, you will learn:

Here, are the essential characteristics of TCP/IP protocol

In this TCP/IP tutorial, we will learn about different TCP/IP layers and their functions

The functionality of the TCP IP model is divided into four layers, and each includes specific protocols.

TCP/IP is a layered server architecture system in which each layer is defined according to a specific function to perform. All these four TCP/IP layers work collaboratively to transmit the data from one layer to another. 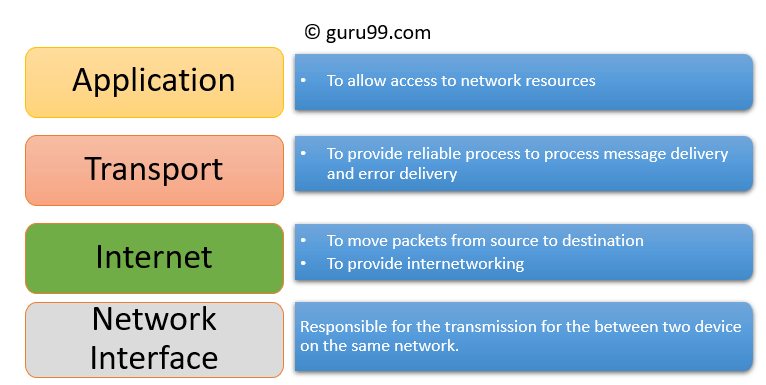 Application layer interacts with software applications to implement a communicating component. The interpretation of data by the application program is always outside the scope of the OSI model.

Example of the application layer is an application such as file transfer, email, remote login, etc.

The function of the Application Layers are:

Transport layer builds on the network layer in order to provide data transport from a process on a source system machine to a process on a destination system. It is hosted using single or multiple networks, and also maintains the quality of service functions.

It determines how much data should be sent where and at what rate. This layer builds on the message which are received from the application layer. It helps ensure that data units are delivered error-free and in sequence.

Transport layer helps you to control the reliability of a link through flow control, error control, and segmentation or de-segmentation.

The transport layer also offers an acknowledgment of the successful data transmission and sends the next data in case no errors occurred. TCP is the best-known example of the transport layer.

An internet layer is a second layer of TCP/IP layes of the TCP/IP model. It is also known as a network layer. The main work of this layer is to send the packets from any network, and any computer still they reach the destination irrespective of the route they take.

The Internet layer offers the functional and procedural method for transferring variable length data sequences from one node to another with the help of various networks.

Layer-management protocols that belong to the network layer are:

Network Interface Layer is this layer of the four-layer TCP/IP model. This layer is also called a network access layer. It helps you to defines details of how data should be sent using the network.

It also includes how bits should optically be signaled by hardware devices which directly interfaces with a network medium, like coaxial, optical, coaxial, fiber, or twisted-pair cables.

A network layer is a combination of the data line and defined in the article of OSI reference model. This layer defines how the data should be sent physically through the network. This layer is responsible for the transmission of the data between two devices on the same network.

Differences between OSI and TCP/IP models 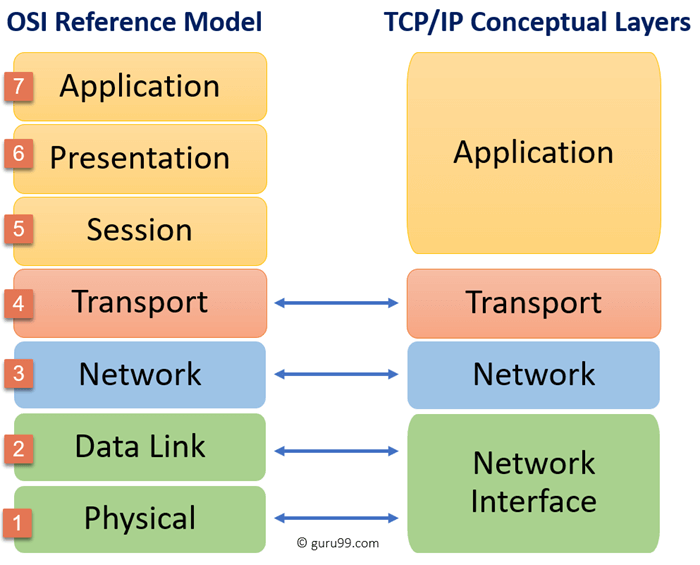 Here, are some important differences between the OSI and TCP/IP model:

Some widely used most common TCP/IP protocol are:

Transmission Control Protocol is an internet protocol suite which breaks up the message into TCP Segments and reassembling them at the receiving side.

An Internet Protocol address that is also known as an IP address is a numerical label. It is assigned to each device that is connected to a computer network which uses the IP for communication. Its routing function allows internetworking and essentially establishes the Internet. Combination of IP with a TCP allows developing a virtual connection between a destination and a source.

The Hypertext Transfer Protocol is a foundation of the World Wide Web. It is used for transferring webpages and other such resources from the HTTP server or web server to the web client or the HTTP client. Whenever you use a web browser like Google Chrome or Firefox, you are using a web client. It helps HTTP to transfer web pages that you request from the remote servers.

SNMP stands for Simple Network Management Protocol. It is a framework which is used for managing the devices on the internet by using the TCP/IP protocol.

DNS stands for Domain Name System. An IP address that is used to identify the connection of a host to the internet uniquely. However, users prefer to use names instead of addresses for that DNS.

TELNET stands for Terminal Network. It establishes the connection between the local and remote computer. It established connection in such a manner that you can simulate your local system at the remote system.

FTP stands for File Transfer Protocol. It is a mostly used standard protocol for transmitting the files from one machine to another.

Advantages of the TCP/IP model

Here, are pros/benefits of using the TCP/IP model:

Disadvantages of the TCP/IP model

Here, are few drawbacks of using the TCP/IP model:

Torrent client is a software for downloading files that utilize a P2P (peer to peer protocol). The...

Cybersecurity refers to protecting hardware, software, and data from attackers. It protects...

In this tutorial we will Learn - What is IP & Mac Address What is Address Resolution Protocol...

Mobile Spy Apps or Spyware Apps are smartphone surveillance software. These types of apps help you to...

Below is a curated list of Bounty Programs by reputable companies 1) Intel Intel's bounty program...

More people have access to the internet than ever before. This has prompted many organizations to...