What is Flash Testing?

Flash Testing is testing type used to check the flash based video, games, movies, etc. are working as expected. In other words, testing the functionality of the flash is known as Flash Testing. Flash is very popular software developed by Mircomedia (now acquired by Adobe). It is used to develop games, applications, graphic based animations, movie, Mobile games, programs, etc. In

In Selenium Automation, if the elements are not found by the general locators like id, class, name, etc. then XPath is required to find an element on the web page to perform operation on that particular element. But in Flash testing, XPath fails to access flash object. So Flashwebdriver object is required to find flash object in any application.

Here you will see how to execute flash Testing and how to do flash testing with Selenium.

Below are the requirements in order to test the flash application

Tools-Below are the testing tools which are useful in flash testing.

Selenium is a very popular tool for web testing. You can create framework across different platform and in a different language. It’s an open source tool and can be downloaded from official website. It is easy to configure, use and implement.

How Flash testing is different from other element

Developing flash is more difficult than developing HTML page with the SEO (Search engine optimization) perspective because flash is not fully readable by the search engine. However, advanced technologies like HTML 5 are introduced to overcome the problems like performance and security.

As mentioned above, the main difference between flash and other element is that Flash is embedded in SWF files, while other elements are embedded in HTML files. That’s why HTML is easy to capture compared to flash.

In any Web pages, the < object > tag is used for any embedded multimedia (like Flash, ActiveX, Video etc.). It implies “embed” within an HTML document. This tag defines a container embedded in < object /> or < embed /> tags in an HTML ) for interactive content or external application. Object name is used to locate flash object on webpages.

For instance, in below example you can see the flash movie is defined in an “embed” tag in HTML document or file.

You can use flash attributes like object id to locate the flash object. And thereby you can perform operations on it as required like play, stop, etc.

As already discussed, Flash objects cannot be accessed using XPath. So in order to do any action on these objects, developer needs to assign appropriate object ID.

Below screen shows the object ID “MyFlashMovie” is assigned for the Flash: 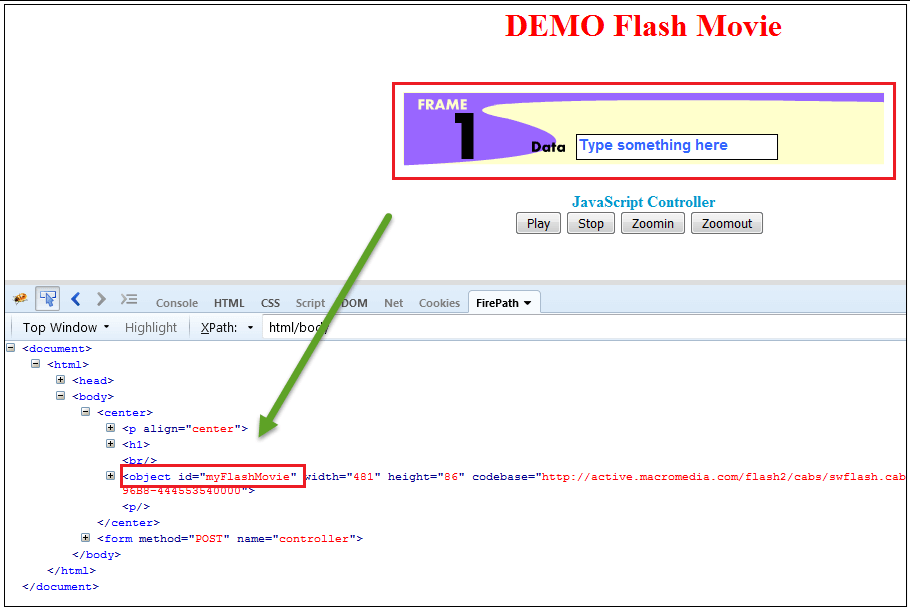 You can also automate the flash using Selenium IDE.

Step 1) You need to open flash application and then Selenium IDE as shown in below screen: 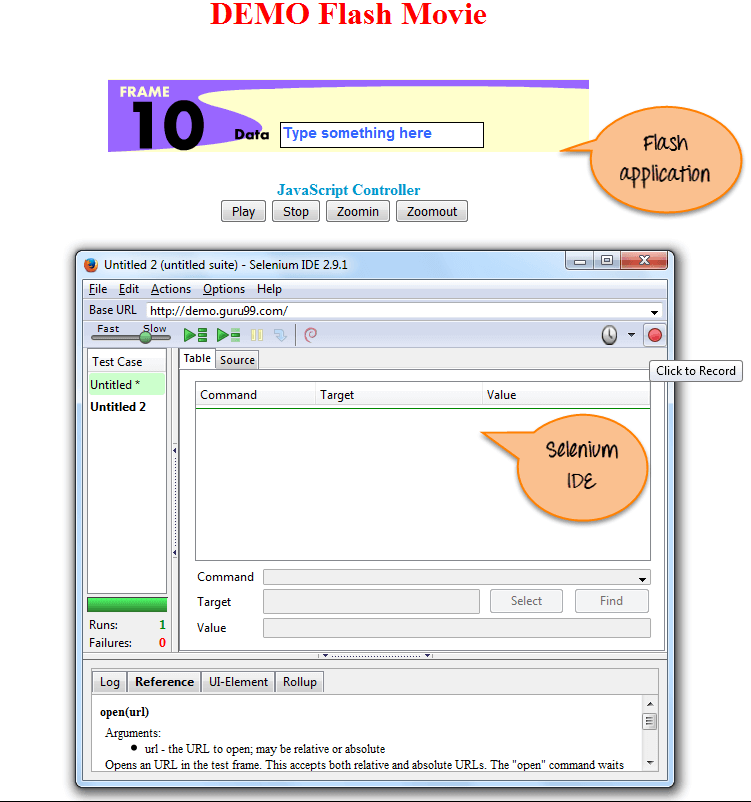 Step 2) Now click on “record red button” on the right-hand side and start doing operation on Flash movie and then you will find the recorded script as shown below: 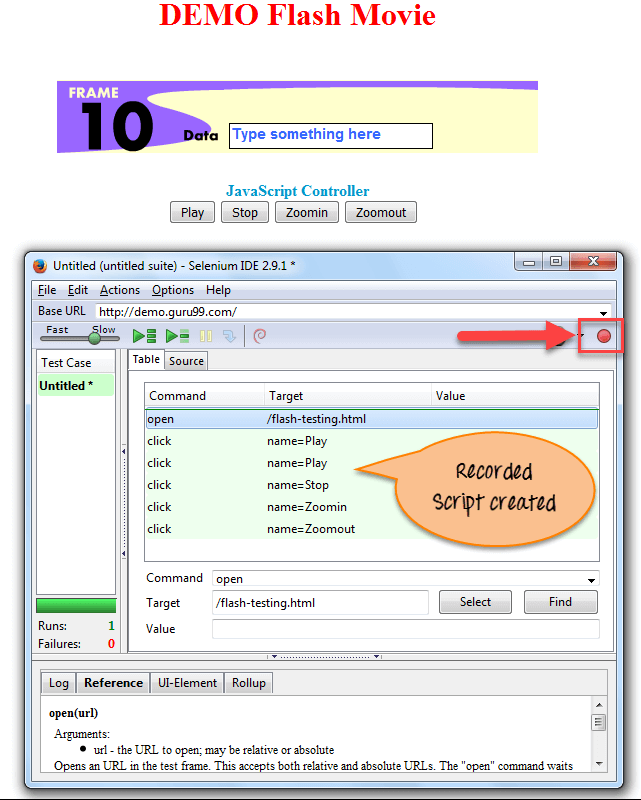 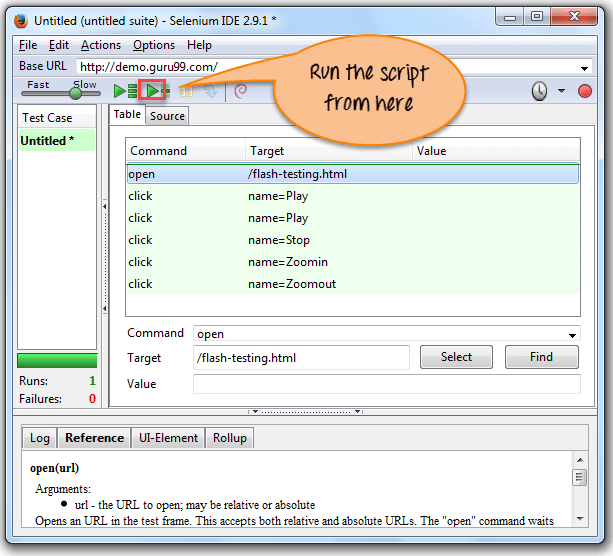 You can also automate the flash using Selenium web driver through the Flashwebdriver object and then call a method to operate flash object. You need to download flashwebdriver jar files:

Step 1) After download, add the jar file in your project as shown in below screen. 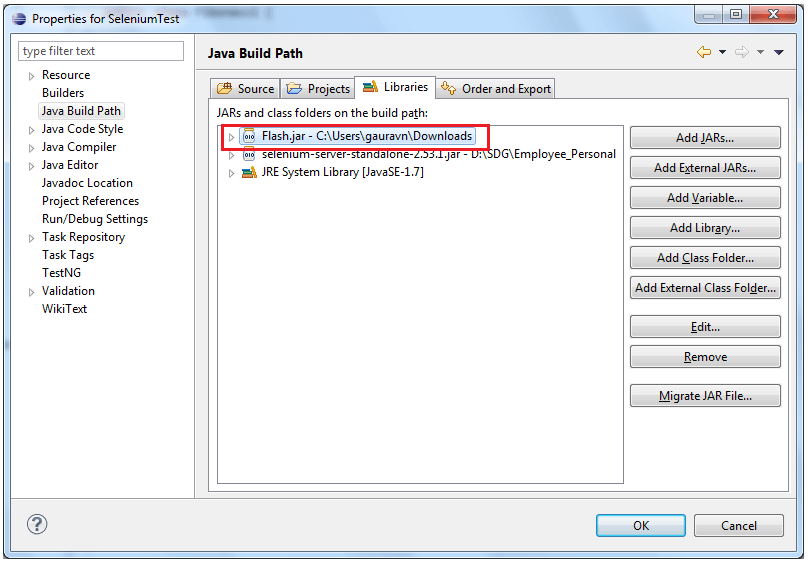 Step 2) Under flash jar file there is a separate flashobjectwebdriver class. Implement the flashWebdriver “myFlashmovie” in your selenium script as shown below in screen. 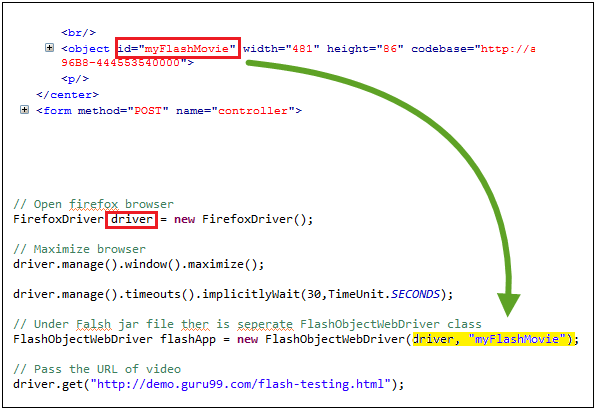 After adding web driver class “MyFlashMovie,” you can access the Flash object.

When to automate flash testing

Usually, you need to Automate Flash testing when the flash object is not easily accessible. This result in testing gets abort and hence fails to test Flash object.

Step 1) You use the “Guru99” flash movie to test the flash scenario.

Step 2) Write a script in Selenium eclipse and execute it. Below code when executed will do following things

Step 3) : Execute the above script.

Output : On execution of the above script the flash movie starts to play and Stop etc.