Linux is a clone of UNIX, the multi-user operating system which can be accessed by many users simultaneously. Linux can also be used in mainframes and servers without any modifications. But this raises security concerns as an unsolicited or malign user can corrupt, change or remove crucial data. For effective security, Linux divides authorization into 2 levels.

In this Linux file commands tutorial, you will learn-

The concept of Linux File permission and ownership is crucial in Linux. Here, we will explain Linux permissions and ownership and will discuss both of them. Let us start with the Ownership.

Every file and directory on your Unix/Linux system is assigned 3 types of owner, given below.

A user is the owner of the file. By default, the person who created a file becomes its owner. Hence, a user is also sometimes called an owner.

A user- group can contain multiple users. All users belonging to a group will have the same Linux group permissions access to the file. Suppose you have a project where a number of people require access to a file. Instead of manually assigning permissions to each user, you could add all users to a group, and assign group permission to file such that only this group members and no one else can read or modify the files.

Any other user who has access to a file. This person has neither created the file, nor he belongs to a usergroup who could own the file. Practically, it means everybody else. Hence, when you set the permission for others, it is also referred as set permissions for the world.

Now, the big question arises how does Linux distinguish between these three user types so that a user ‘A’ cannot affect a file which contains some other user ‘B’s’ vital information/data. It is like you do not want your colleague, who works on your Linux computer, to view your images. This is where Permissions set in, and they define user behavior.

Let us understand the Permission system on Linux.

Every file and directory in your UNIX/Linux system has following 3 permissions defined for all the 3 owners discussed above.

Here, we have highlighted ‘-rw-rw-r–‘and this weird looking code is the one that tells us about the Unix permissions given to the owner, user group and the world.

Here, the first ‘–‘ implies that we have selected a file.p>

Else, if it were a directory, d would have been shown.

The characters are pretty easy to remember.

Let us look at it this way.

The first part of the code is ‘rw-‘. This suggests that the owner ‘Home’ can:

By design, many Linux distributions like Fedora, CentOS, Ubuntu, etc. will add users to a group of the same group name as the user name. Thus, a user ‘tom’ is added to a group named ‘tom’.

The second part is ‘rw-‘. It for the user group ‘Home’ and group-members can:

The third part is for the world which means any user. It says ‘r–‘. This means the user can only:

Say you do not want your colleague to see your personal images. This can be achieved by changing file permissions.

We can use the ‘chmod’ command which stands for ‘change mode’. Using the command, we can set permissions (read, write, execute) on a file/directory for the owner, group and the world.

There are 2 ways to use the command –

In this mode, file permissions are not represented as characters but a three-digit octal number.

The table below gives numbers for all for permissions types.

In the above-given terminal window, we have changed the permissions of the file ‘sample to ‘764’. 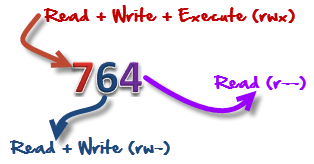 This is shown as ‘-rwxrw-r–

This is how you can change user permissions in Linux on file by assigning an absolute number.

In the Absolute mode, you change permissions for all 3 owners. In the symbolic mode, you can modify permissions of a specific owner. It makes use of mathematical symbols to modify the Unix file permissions.

The various owners are represented as –

We will not be using permissions in numbers like 755 but characters like rwx. Let’s look into an example 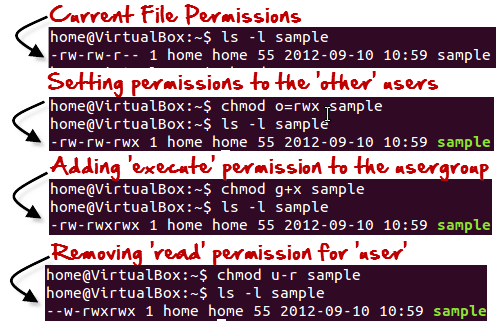 Changing Ownership and Group in Linux

For changing the ownership of a file/directory, you can use the following command:

Let’s see this in action 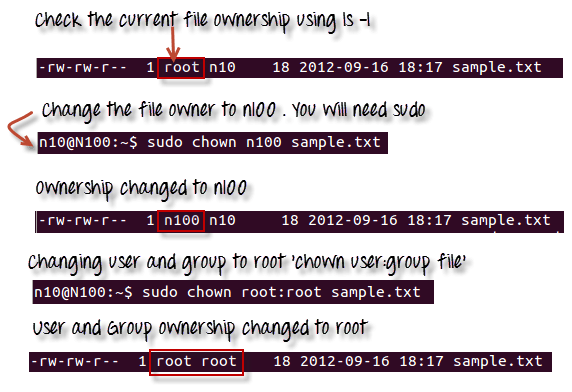 In case you want to change group-owner only, use the command