1) What is Cucumber? What are the advantages of Cucumber?

Advantages of Cucumber are:

2) What are the two files required to execute a Cucumber test scenario?

Two files required to execute a Cucumber test scenario are

3) explain the use of Background keyword in Cucumber?

Background keyword is used to group multiple given statements into a single group. The keyword mostly used when the same set of given statements are repeated in each scenario of the feature file.

4) Give an example of a behavior is driven test in plain text?

5) What is Scenario Outline in feature file?

Scenario Outline is the same scenario can be executed for multiple sets of data using the scenario outline. The data is provided by a tabular structure separated by (I I). 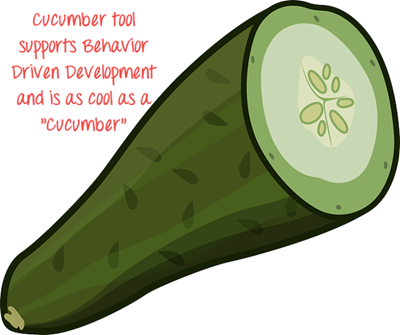 A step definition is the actual code implementation of the feature mentioned in the feature file.

7) Give an example for step definition using “Given” function?

end – This will visit www.yahoo.com

8) What are the differences between Jbehave and Cucumber?

Although Cucumber and Jbehave are meant for the same purpose, acceptance tests are completely different frameworks


11) What is the language used for expressing scenario in feature file?

12) What are regular expressions?

BDD or Behavior-driven development is a process of developing software based on TDD (Test Driven Development) which focusses on the behavioral specification of software testing units.

14) What software do you need to run a Cucumber Web Test cases?

15) What does a cucumber features/ support file contain?

Features/ support file contains supporting ruby code. Files in support load before those in step_definitions, which can be useful for environment configuration.

Features file contain a high-level description of the Test Scenario in simple language. It is known as Gherkin which is a plain English text language. Feature File consists of the following components like:

Selenium is an automation tool which is a widely used tool for Functional Testing of the web-based application. Selenium supports different language like ruby, java, python C#, etc.

18) Why use Cucumber with Selenium?

Cucumber and Selenium are two popular technologies. Many organizations use Selenium for functional testing. These organizations which are using Selenium want to integrate Cucumber with Selenium as Cucumber helps you to read and to understand the application flow.

Here, are some prominent advantages of using Cucumber.

20) What is a Step Definition?

Step definition maps the Test Case Steps in the feature files to code. It executes the steps on Application Under Test and checks the outcomes against expected results. In order to execute step definition it must match the given component in a feature.