What is CPU Scheduling?

In this CPU scheduling tutorial, you will learn:

In this type of scheduling method, the CPU has been allocated to a specific process. The process that keeps the CPU busy will release the CPU either by switching context or terminating. It is the only method that can be used for various hardware platforms. That’s because it doesn’t need special hardware (for example, a timer) like preemptive scheduling.

When scheduling is Preemptive or Non-Preemptive?

To determine if scheduling is preemptive or non-preemptive, consider these four parameters:

Only conditions 1 and 4 apply, the scheduling is called non- preemptive.

All other scheduling are preemptive.

A CPU scheduling algorithm tries to maximize and minimize the following: 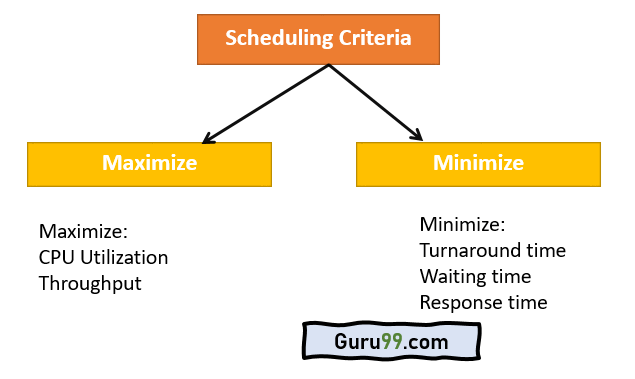 Waiting time: Waiting time is an amount that specific process needs to wait in the ready queue.

Response time: It is an amount to time in which the request was submitted until the first response is produced.

Turnaround Time: Turnaround time is an amount of time to execute a specific process. It is the calculation of the total time spent waiting to get into the memory, waiting in the queue and, executing on the CPU. The period between the time of process submission to the completion time is the turnaround time.

Timer interruption is a method that is closely related to preemption. When a certain process gets the CPU allocation, a timer may be set to a specified interval. Both timer interruption and preemption force a process to return the CPU before its CPU burst is complete.

Most of the multi-programmed operating system uses some form of a timer to prevent a process from tying up the system forever.

It is a module that provides control of the CPU to the process. The Dispatcher should be fast so that it can run on every context switch. Dispatch latency is the amount of time needed by the CPU scheduler to stop one process and start another.

There are mainly six types of process scheduling algorithms

First Come First Serve is the full form of FCFS. It is the easiest and most simple CPU scheduling algorithm. In this type of algorithm, the process which requests the CPU gets the CPU allocation first. This scheduling method can be managed with a FIFO queue.

As the process enters the ready queue, its PCB (Process Control Block) is linked with the tail of the queue. So, when CPU becomes free, it should be assigned to the process at the beginning of the queue.

The full form of SRT is Shortest remaining time. It is also known as SJF preemptive scheduling. In this method, the process will be allocated to the task, which is closest to its completion. This method prevents a newer ready state process from holding the completion of an older process.

Priority scheduling is a method of scheduling processes based on priority. In this method, the scheduler selects the tasks to work as per the priority.

Priority scheduling also helps OS to involve priority assignments. The processes with higher priority should be carried out first, whereas jobs with equal priorities are carried out on a round-robin or FCFS basis. Priority can be decided based on memory requirements, time requirements, etc.

SJF is a full form of (Shortest job first) is a scheduling algorithm in which the process with the shortest execution time should be selected for execution next. This scheduling method can be preemptive or non-preemptive. It significantly reduces the average waiting time for other processes awaiting execution.

This algorithm separates the ready queue into various separate queues. In this method, processes are assigned to a queue based on a specific property of the process, like the process priority, size of the memory, etc.

However, this is not an independent scheduling OS algorithm as it needs to use other types of algorithms in order to schedule the jobs.

The Purpose of a Scheduling algorithm

Here are the reasons for using a scheduling algorithm: