What is Process Scheduling?

Process Scheduling is an OS task that schedules processes of different states like ready, waiting, and running.

Process scheduling allows OS to allocate a time interval of CPU execution for each process. Another important reason for using a process scheduling system is that it keeps the CPU busy all the time. This allows you to get the minimum response time for programs.

In this process scheduling tutorial, you will learn:

Process Scheduling Queues help you to maintain a distinct queue for each and every process states and PCBs. All the process of the same execution state are placed in the same queue. Therefore, whenever the state of a process is modified, its PCB needs to be unlinked from its existing queue, which moves back to the new state queue. 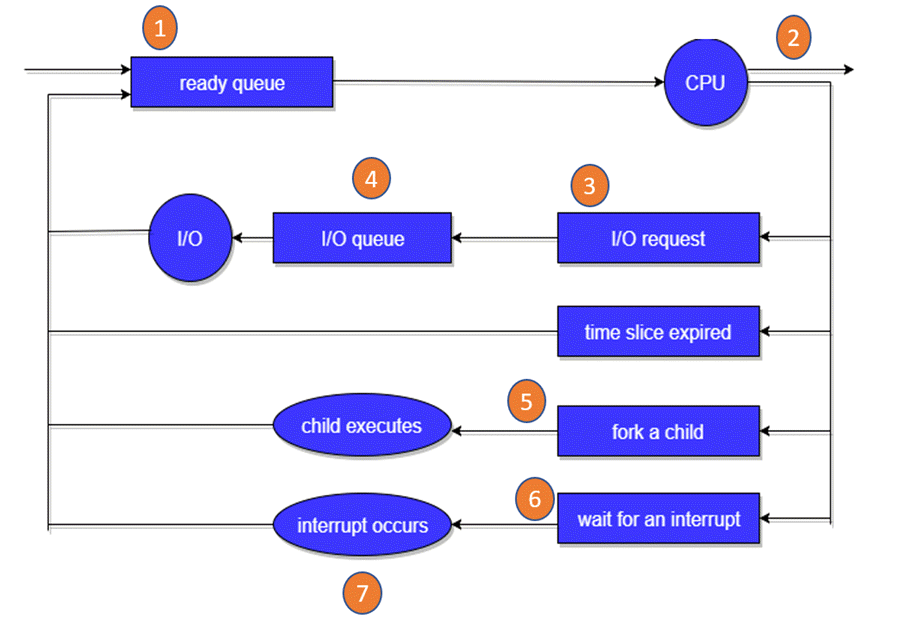 In the above-given Diagram,

In the Operating system, whenever a new process is built, it is entered into the system, which should be running.

The process that are not running are kept in a queue, which is waiting for their turn to execute. Each entry in the queue is a point to a specific process.

A scheduler is a type of system software that allows you to handle process scheduling.

There are mainly three types of Process Schedulers:

Long term scheduler is also known as a job scheduler. This scheduler regulates the program and select process from the queue and loads them into memory for execution. It also regulates the degree of multi-programing.

However, the main goal of this type of scheduler is to offer a balanced mix of jobs, like Processor, I/O jobs., that allows managing multiprogramming.

Medium-term scheduling is an important part of swapping. It enables you to handle the swapped out-processes. In this scheduler, a running process can become suspended, which makes an I/O request.

A running process can become suspended if it makes an I/O request. A suspended processes can’t make any progress towards completion. In order to remove the process from memory and make space for other processes, the suspended process should be moved to secondary storage.

Short term scheduling is also known as CPU scheduler. The main goal of this scheduler is to boost the system performance according to set criteria. This helps you to select from a group of processes that are ready to execute and allocates CPU to one of them. The dispatcher gives control of the CPU to the process selected by the short term scheduler.

Long-Term Vs. Short Term Vs. Medium-Term

What is Context switch?

It is a method to store/restore the state or of a CPU in PCB. So that process execution can be resumed from the same point at a later time. The context switching method is important for multitasking OS.