Skip to content
Following are frequently asked questions in interviews for freshers as well as experienced Azure professionals.

1. What is Cloud Computing?

2. What is Microsoft Azure?

Azure is a cloud computing platform which was launched by Microsoft in Feb 2010. It is a highly flexible cloud platform that offers development, data storage, service hosting, and service management.

3. Explain the Importance of the role and how many types of roles are available in Windows Azure?

Roles are a very important concept in Windows Azure, and learning them is the base for further programming.

Three types of roles in Windows Azure are: 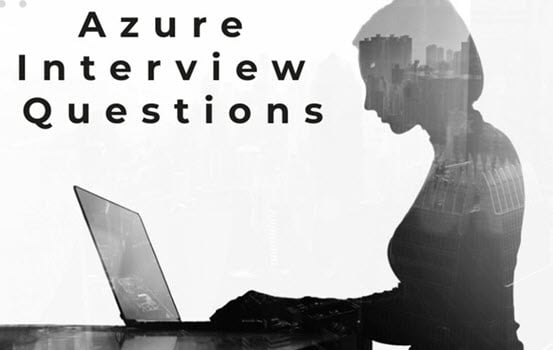 Azure CDN should be used to reduce load time and bandwidth as well as speed the responsiveness.

Most important application of Microsoft Azure are:

PaaS is a computing platform that includes an operating system, programming language execution environment, database, or web services. Developers and application providers use this type of Azure services.

Traffic management offers many advantages for the user:

8. What are Break-fix issues in Microsoft Azure?

In, Microsoft Azure, all the technical problem is called break-fix issues. This term uses when “work involved in support a technology when it fails in the normal course of its function.

Windows Azure Diagnostic offers the facility to store diagnostic data. In Azure, some diagnostics data is stored in the table, while some are stored in a blob. The diagnostic monitor runs in Windows Azure as well as in the computer’s emulator for collecting data for a role instance.

10. State the difference between repetitive and minimal monitoring.

Verbose monitoring collects metrics based on performance. It allows a close analysis of data fed during the process of application.

On the other hand, minimal monitoring is a default configuration method. It makes the user of performance counters gathered from the operating system of the host.

11. What is the main difference between the repository and the powerhouse server?

The main difference between them is that repository servers are instead of the integrity, consistency, and uniformity while powerhouse server governs the integration of different aspects of the database repository.

Command task is an operational window which set off the flow of either single or multiple common whiles when the system is running.

13. What are unconnected lookups?

A cmdlet is a command which is utilized as a part of the Microsoft PowerShell environment. The cmdlet is called by the Windows PowerShell to automate the scripts which are in the command line.

15. What is the use of the Migration Assistant tool in Azure Websites?

Migration Assistant tool helps you to examine your IIS installation. It helps you to recognize which site can be migrated to the cloud. It is also featuring components which are either not migrated or unsupported on the Azure platform.

16. What is the use of Azure Active Directory?

Azure Active Directory is an identify and access management system. It is very much similar to the active directories. It allows you to grant your employee in accessing specific products and services within the network.

17. What is HDInsight in Microsoft Azure?

HDInsight is a could service which that makes it easy. It is fast and cost-effective to process a massive amount of data using with the help of open-source frameworks like Spark, Hadoop, Hive, Storm and R. HDInsight offers various type of scenarios which includes ETL, data warehousing, and Machine Learning.

Service fabric is a middleware platform which gives more scalable outcome. It mostly renders with a more managed and reliable enterprise.

It is a logical grouping of Virtual Machines. It allows the Azure cloud to build understand how the application for a user is built to provide availability and redundancy.

21. Name the types of web application which can be deployed with Azure

ASP.Net, PHP, WCF are a type of web application which can be deployed with SQL Azure.

22. How many customers subscriptions allowed in managed disks?

The number of managed disks subscription is limited to 2000.

The course service definition file (.csdef) defines the service mode. It includes a number of roles.

24. State the difference between copy and shortcut

Copied means transferring an object from one to another folder which takes double space. The shortcut is a dynamic Link on an object which saves the space which shows changes in the original object.

25. Name the services which are used to manage resources in Azure

27. What are the important drawbacks of using Microsoft Azure?

Microsoft SharePoint Server (MOSS) that consist of a complete version of the portal platform. It allows a user to manage, share and even create the document.

29. What is the step you need to perform when drive failure occurs?

When there is an instance that the drive has failed, the following step should be performed:

30. What it’s the difference between PROC MEANS and PROC SUMMARY?

31. State the difference between a library and a list

The library is an interface which allows to manage and store a document which can be created using Word, Excel, or PowerPoint.

On the other hand, the list is the representation of the item in a tabular format using column and rows. It can be attached with documents.

32. Can you create VM by using Microsoft Azure Resource Manager in a Virtual Network?

No, it is not possible to create a virtual machine using the Azure Resource Manager.

34. What the important requirements when creating a new Virtual Machine?

The length of the user name should not more than 20 characters, and it should not end with a period.

37. What are the three main components of the Windows Azure platform?

Three most important components of the Windows Azure platform are:

Cspack is a command-line tool which generates a service package file. It also helps you to prepares an application for deployment, either in compute emulator or Microsoft Windows Azure.

39. What is the purpose of using an application partition scheme in Azure?

An application partition aims to reduce the replication traffic within a specific domain area.

The Service ensures that when you send two or more roles instances for each role, access to your cloud service will be maintained 9 out of 10 times. Moreover, identification re-correction activity will be stared when the procedure of a role instance is not running.

41. What do you mean by the network security groups?

A network security group allows you to manage the network traffic to NIC or subnets etc. If it is connected in the best possible way, then the network load will be distributed wisely.

42. What happens when you exhaust the maximum failed attempts by authenticating yourself using Azure AD?

We use a more method to lock accounts. This is based on the IP address of the request and the passwords entered by the user.

43. Explain the concept of the table in Windows Azure

A table is one kind of Azure store. In which you can store your information.

Below given are the key concepts of the table:

Temp Drive is used for Paging in Azure. However, it is a short drive, and you should not use it for storage.

Guest OS is an operating system which runs on the virtual machine which allows you to hosts an instance of a role.

46. When will you find the list of built-in app with ADD?

The Azure Active Directory has more than 2500 built-in app. It allows you to access the application more securely.

Yes, a scale allows you to define an attached data disk configuration which applies to all VMs In the set. Other options for data storing are:

BYOL Model: It brings your license model. It is just right to access model. You can obtain it outside of the Azure Marketplace. This model is not charged any fees.

Free Software Trial: It is a full-featured version which is promotionally free for a limited period of time. However, for excessive use, you need to pay fees.

Usage-based: This is a widely used model of Microsoft Azure. Here, user are changed for only that service which is used by them.

Monthly fee: Here, you need to pay a fixed monthly payment for a subscription.

Csrun is a command-line tool that deploys a packaged application to the Windows Azure compute emulator and manages the running service.

Two types of blobs offer in Azure are:

51. How much storage can a user with a virtual machine use?

Each data disk on the VM can be up to 1 TB. However, the number of data disks, which you can use depends on the size of the virtual machine.

Three types of disk used in VMs are:

Two most common could services are: