What is Tableau? Uses and Applications

Tableau is a powerful and fastest growing data visualization tool used in the Business Intelligence Industry. It helps in simplifying raw data into the very easily understandable format.

Data analysis is very fast with Tableau and the visualizations created are in the form of dashboards and worksheets. The data that is created using Tableau can be understood by professional at any level in an organization. It even allows a non-technical user to create a customized dashboard.

The best feature Tableau are

The great thing about Tableau software is that it doesn't require any technical or any kind of programming skills to operate. The tool has garnered interest among the people from all sectors such as business, researchers, different industries, etc.

The Tableau Product Suite consists of 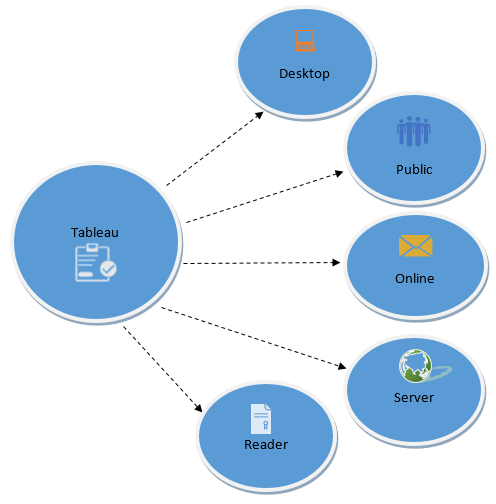 For clear understanding, data analytics in tableau can be classified into two section

Let's study all the products one by one.

Tableau Desktop has a rich feature set and allows you to code and customize reports. Right from creating the charts, reports, to blending them all together to form a dashboard, all the necessary work is created in Tableau Desktop.

For live data analysis, Tableau Desktop provides connectivity to Data Warehouse, as well as other various types of files. The workbooks and the dashboards created here can be either shared locally or publicly.

Based on the connectivity to the data sources and publishing option, Tableau Desktop is classified into

It is Tableau version specially build for the cost-effective users. By the word "Public," it means that the workbooks created cannot be saved locally, in turn, it should be saved to the Tableau's public cloud which can be viewed and accessed by anyone.

There is no privacy to the files saved to the cloud since anyone can download and access the same. This version is the best for the individuals who want to learn Tableau and for the ones who want to share their data with the general public.

However, It's not necessary that the licensed users need to have the Tableau Server installed on their machine. They just require the login credentials with which they can check reports via a web browser. The security is high in Tableau server, and it is much suited for quick and effective sharing of data in an organization.

As the name suggests, it is an online sharing tool of Tableau. Its functionalities are similar to Tableau Server, but the data is stored on servers hosted in the cloud which are maintained by the Tableau group.

There is no storage limit on the data that can be published in the Tableau Online. Tableau Online creates a direct link to over 40 data sources that are hosted in the cloud such as the MySQL, Hive, Amazon Aurora, Spark SQL and many more.

If you want to share the dashboards that you have created, the receiver should have Tableau Reader to view the document.

How does Tableau work?

Tableau connects and extracts the data stored in various places. It can pull data from any platform imaginable. A simple database such as an excel, pdf, to a complex database like Oracle, a database in the cloud such as Amazon webs services, Microsoft Azure SQL database, Google Cloud SQL and various other data sources can be extracted by Tableau.

When Tableau is launched, ready data connectors are available which allows you to connect to any database. Depending on the version of Tableau that you have purchased the number of data connectors supported by Tableau will vary.

The pulled data can be either connected live or extracted to the Tableau's data engine, Tableau Desktop. This is where the Data analyst, data engineer work with the data that was pulled up and develop visualizations. The created dashboards are shared with the users as a static file. The users who receive the dashboards views the file using Tableau Reader.

The data from the Tableau Desktop can be published to the Tableau server. This is an enterprise platform where collaboration, distribution, governance, security model, automation features are supported. With the Tableau server, the end users have a better experience in accessing the files from all locations be it a desktop, mobile or email.

Both Excel and Tableau are data analysis tools, but each tool has its unique approach to data exploration. However, the analysis in Tableau is more potent than excel.

Excel works with rows and columns in spreadsheets whereas Tableau enables in exploring excel data using its drag and drop feature. Tableau formats the data in Graphs, pictures that are easily understandable.

To conclude, Tableau beats Excel in major areas like the interactive dashboards, visualizations, capabilities to work with large-scale data and many more.

Tableau is a data visualization tool that can connect to almost any data source. However, its...

In this tutorial, you will learn- Connecting to various data sources Connection to Text File...

What is NumPy? NumPy is an open source library available in Python that aids in mathematical,...

Tableau Desktop Workspace In the start screen, go to File > New to open a Tableau Workspace The...

Tableau can create interactive visualizations customized for the target audience. In this...