Skip to content
Variables are used in almost all computer program and VBA is no different. It’s a good practice to declare a variable at the beginning of the procedure. It is not necessary, but it helps to identify the nature of the content (text, data, numbers, etc.)

In this VBA tutorial, you will learn-

Variables are specific values that are stored in a computer memory or storage system. Later, you can use that value in code and execute. The computer will fetch that value from the system and show in the output. Each of the Excel VBA variable types must be given a name.

To name the variable in VBA, you need to follow the following rules.

Here are some example for Valid and Invalid names for variables in VBA.


In VBA, we need to declare the variables before using them by assigning names and data type.

In VBA, Variables are either declared Implicitly or Explicitly.

VBA variable is no different than other programming languages. To declare a variable in VBA you use the keyword “Dim.”

To declare a variable in VBA, type Dim followed by a name:

Step 3): Open the Macro editor, enter the code for variable in the Macro1

Step 4): Execute the code for Macro 1

When you run this code, you will get the following output in your sheet. 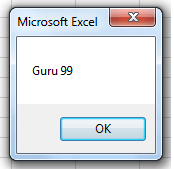 Computer cannot differentiate between the numbers (1,2,3..) and strings (a,b,c,..). To make this differentiation, we use Data Types.

VBA data types can be segregated into two types

In VBA, if the data type is not specified, it will automatically declare the variable as a Variant.

Let see an example, on how to declare variables in VBA. In this example, we will declare three types of variables string, joining date and currency.

Step 1) Like, in the previous tutorial, we will insert the commandButton1 in our Excel sheet.

Step 2) In next step, right-click on the button and select View code. It will open the code window as shown below. 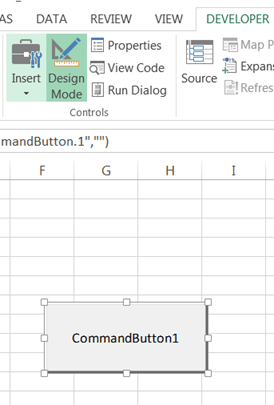 Step 4) Turn off design mode, before clicking on command button 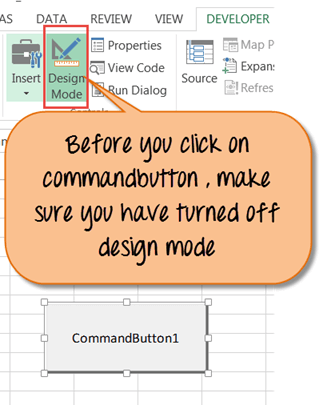 Step 5) After turning off the design mode, you will click on commandButton1. It will show the following variable as an output for the range we declared in code. 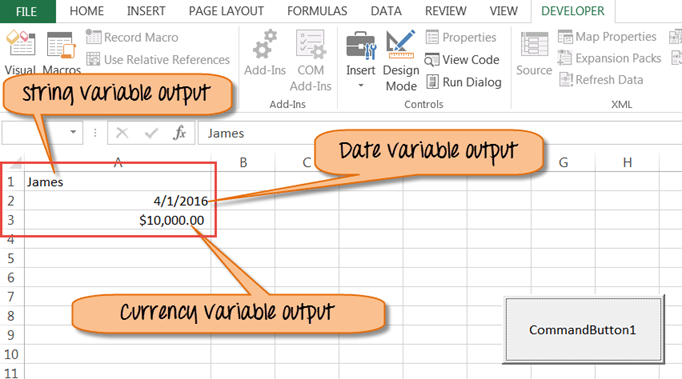 Constant is like a variable, but you cannot modify it. To declare VBA constants, you can use keyword Const.

There are two types of constant,

You can either specify the scope as private by default or public. For example,