What are UML Diagrams?

UML Diagrams stands for Unified Modeling Language. It is a standard which is mainly used for creating object-oriented, meaningful documentation models for any software system present in the real world. It provides us a way to develop rich models that describe the working of any software/hardware systems.

UML serves a great way of creating professional documentation which is a necessary part of any project development. UML is an essential part of creating an object-oriented design of systems. It provides you means for creating powerful models and designs for rational systems which can be understood without much difficulties.

In this tutorial you will learn,

Why use UML? Complete History

As the systems developed were complicated to understand, it led to the design and analysis problems which were faced after the deployment of the system. It was difficult to explain the system to others.

As soon as the UML was introduced, many game-changing experiments and approaches were made for simplifying such difficult tasks of analyzing the system.

UML is an object-oriented unified modeling language. It was invented by brilliant software engineers Grady Booch, Ivar Jacobson, and James Rumbaugh of Rational software during 1994 and 1995. It was under development until 1996.

Each of UML inventors, viz, Grady Booch, Ivar Jacobson, and James Rumbaugh had a fantastic idea for designing a language which will reduce the complexity.

Later on, behavioral models and state-charts were introduced in the UML which were invented by David Harel.

In 2005, the International Organization for Standardization approved UML as an ISO standard. It is used in various industries for creating object-oriented models.

Before beginning with the UML concept, one must understand the basics of the conceptual model.

A conceptual model is made up of various concepts which are interrelated. It helps us to understand

A conceptual model is required in UML. You have to understand the entities and relationships between them before actually modeling the system.

Following object-oriented concepts are required to begin with UML:

Above are also called as the basic building blocks of a UML.

What is UML Diagram?

UML Diagrams are the output of the Unified Modeling Language. It is a pictorial representation of classes, objects, and relationships between them. UML diagram is a model that describes a part of a system. It is used to define the functionality or a design of a system. A diagram must be clear and concise so that the viewer will readily understand it.

UML diagrams are divided into three different categories such as,

Following are the various structural diagrams in UML:

Any real-world system can be represented in either a static form or a dynamic form. A system is said to be complete if it is expressed in both the static and dynamic ways. The behavioral diagram represents the functioning of a system.

Following are the various behavioral diagrams in UML:

Interaction diagram is nothing but a subset of behavioral diagrams. It is used to visualize the flow between various use case elements of a system. Interaction diagrams are used to show an interaction between two entities and how data flows within them.

Following are the various interaction diagrams in UML:

The detailed explanation of the above diagrams is explained in further tutorials.

There are many tools available in the market to generate UML diagrams. Some are desktop based while others can be used online. Following is a curated list of tools which can be used for the creation of UML models:

We are going to use Star UML application for generating UML diagrams.

According to your PC specifications. Download any version of the application. Here we are going to choose the windows option.

Once the application is downloaded, install it with all the default options. After installation, launch the Staruml application in your PC.

You will see the following window, 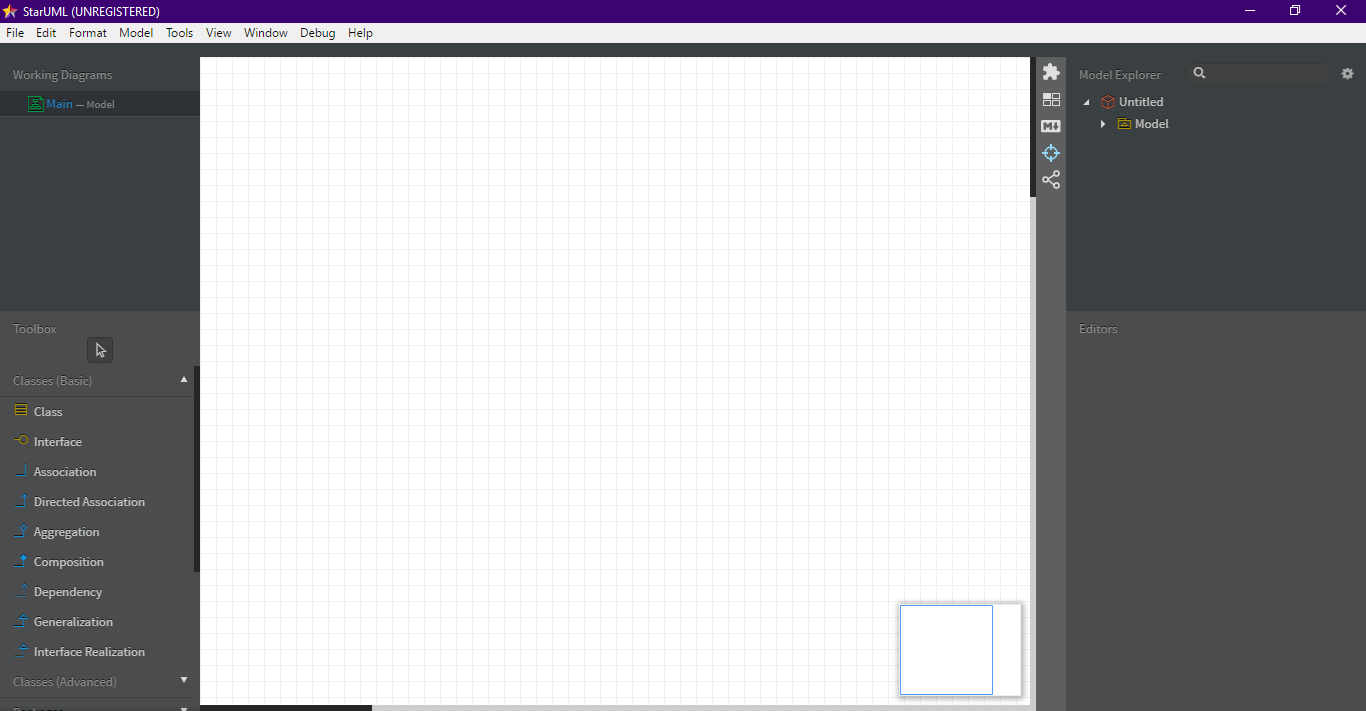