C++ is a general-purpose, object-oriented programming language. It was created by Bjarne Stroustrup at Bell Labs circa 1980. C++ is very similar to C (invented by Dennis Ritchie in the early 1970s). C++ is so compatible with C that it will probably compile over 99% of C programs without changing a line of source code. Though C++ is a lot of well-structured and safer language than C as it OOPs based.

Some computer languages are written for a specific purpose. Like, Java was initially devised to control toasters and some other electronics. C was developed for programming OS. Pascal was conceptualized to teach proper programming techniques. But C++ is a general-purpose language. It well deserves the widely acknowledged nickname “Swiss Pocket Knife of Languages.”

In this introduction to C++ tutorial, you will learn C++ basic concepts-

Popular programming languages in use?

Popular languages that are mainly in use are Java, C++, Python, and C.

These languages force the programmer to think more about the problem in computer programming terms and its implementations, instead of the business logic. 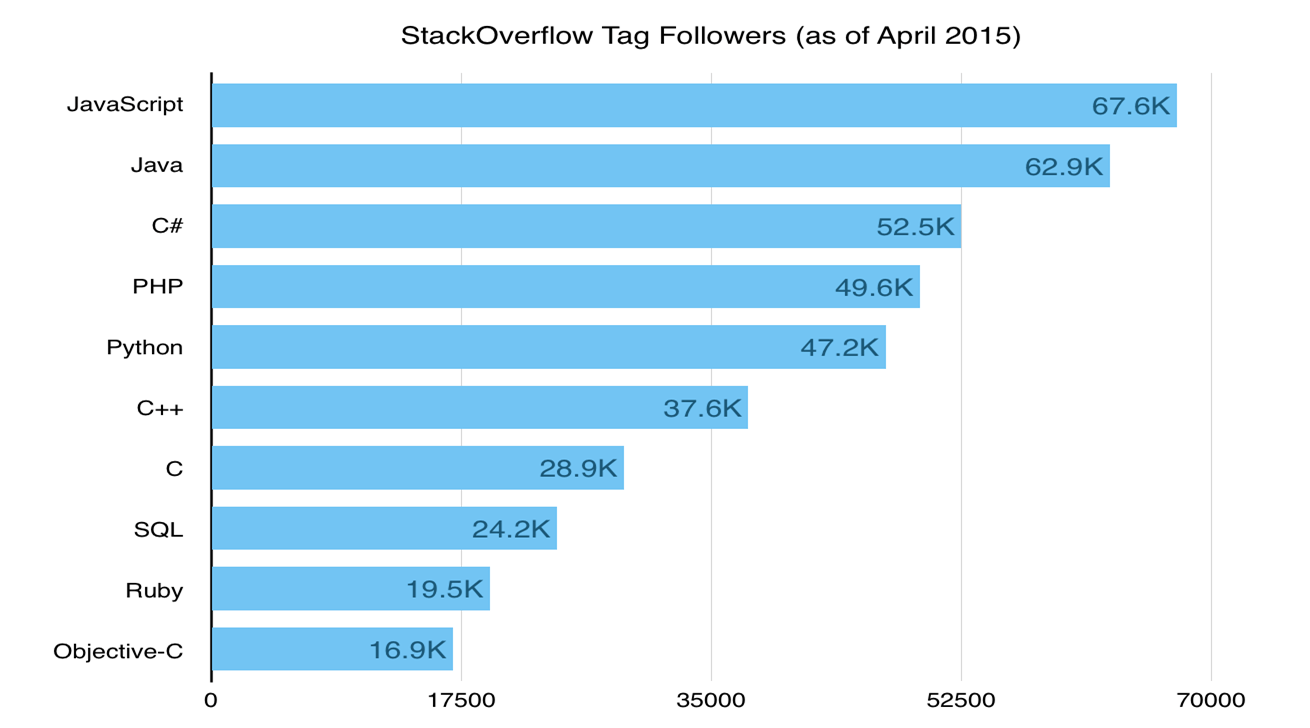 As you can see despite being old, C++ is relatively popular still today which is a feat in and its own. The graph is from stackoverflow.com

The answer depends on perspective and requirements. Some tasks can be done in C++, though not very quickly. For example, designing GUI screens for applications.

Other languages like Visual Basic, Python have GUI design elements built into them. Therefore, they are better suited for GUI type of task.

Some of the scripting languages that provide extra programmability to applications. Such as MS Word and even photoshop tend to be variants of Basic, not C++.

C++ is still used widely, and the most famous software have their backbone in C++.

This tutorial will help you learn C++ basic and the advanced concepts.

Some of today’s most visible used systems have their critical parts written in C++.

Many programming languages depend on C++’s performance and reliability in their implementation. Examples include:

Let’s use a list of courses on “guru99” as the example! You probably have a list of courses in front of you. But how do you think they stored that. There can be a lot of courses, and different users may register for different courses. Do they generate a different variable for each user? For example, let’s say we need to keep track of 10 courses.

If we need to store 10 courses, we would probably define 10 variables, right?

In the world of programming, this is just a horrible way of trying to store 10 different variables. This is because of two main reasons:

So, what is the RIGHT WAY?

Storing them in data structures.

A data structure is a great way to get around having to create thousands of variables. C++ contains many types of inbuilt data structures. Most often used is arrays which will be taught later.

The syntax is a layout of words, expression, and symbols.

Well, it’s because an email address has its well-defined syntax. You need some combination of letters, numbers, potentially with underscores (_) or periods (.) in between, followed by an at the rate (@) symbol, followed by some website domain (company.com).

So, syntax in a programming language is much the same. They are some well-defined set of rules that allow you to create some piece of well-functioning software.

But, if you don’t abide by the rules of a programming language or syntax, you’ll get errors.

In the real world, a tool is something (usually a physical object) that helps you to get a certain job done promptly.

Well, this holds true with the programming world too. A tool in programming is some piece of software which when used with the code allows you to program faster.

There are probably tens of thousands, if not millions of different tools across all the programming languages.

Most crucial tool, considered by many, is an IDE, an Integrated Development Environment. An IDE is a software which will make your coding life so much easier. IDEs ensure that your files and folders are organized and give you a nice and clean way to view them.

Use of C++ Programming Language

Here are some prime uses of C++ Programming Language:

Wheater it is Microsoft Windows or Mac OSX or Linux – all of the operating systems have some parts which are programmed in C++. It is the backbone of all the well-known OSs as C++ is a strongly typed and quick programming language, that makes it an ideal choice for developing an operating system.

Because of the fact that it is one of the fastest programming languages, C++ is widely used in programming of game development engines. C++ can easily manipulate hardware resources and it can also provide procedural programming for CPU intensive functions.

The rendering engines of various web browsers are programmed in C++ because of the speed it offers.

One of the most popularly used core-banking systems – Infosys Finacle, uses C++ as the backend programming language. Banking applications need to process millions of transactions on a daily basis and require high concurrency and low latency support.

Cloud storage systems use scalable file-systems that work close to the hardware. That’s why C++ becomes a preferred choice for Cloud systems.