Key Differences between SQL and NoSQL

Structured Query language (SQL) pronounced as “S-Q-L” or sometimes as “See-Quel” is the standard language for dealing with Relational Databases. A relational database defines relationships in the form of tables.

That doesn’t mean SQL cannot do things beyond that. It can do a lot of things including, but not limited to, optimizing and maintenance of databases.

NoSQL is a non-relational DMS, that does not require a fixed schema, avoids joins, and is easy to scale. NoSQL database is used for distributed data stores with humongous data storage needs. NoSQL is used for Big data and real-time web apps. For example companies like Twitter, Facebook, Google that collect terabytes of user data every single day.

NoSQL database stands for “Not Only SQL” or “Not SQL.” Though a better term would NoREL NoSQL caught on. Carl Strozz introduced the NoSQL concept in 1998.

Next, we will discuss the key diff between SQL and NoSQL.

Difference Between SQL and NoSQL

Below is the main difference between NoSQL and SQL:

The below image shows Stackoverflow questions for SQL vs NoSQL databases:

The below image shows the Google trends for NoSQL vs SQL: 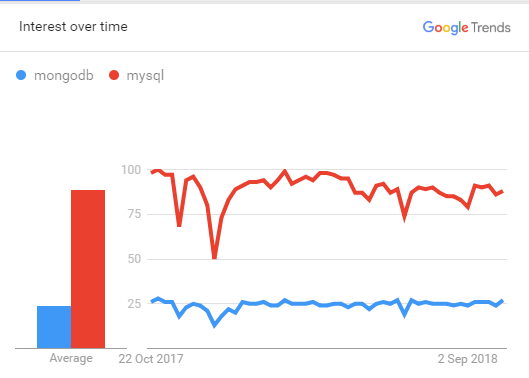