Skip to content
The python programming language allows you to use multiprocessing or multithreading. In this tutorial, you will learn how to write multithreaded applications in Python.

What is a Thread?

A thread is a unit of execution on concurrent programming. Multithreading is a technique which allows a CPU to execute many tasks of one process at the same time. These threads can execute individually while sharing their process resources.

What is a Process?

A process is basically the program in execution. When you start an application in your computer (like a browser or text editor), the operating system creates a process.

What is Multithreading in Python?

Multithreading in Python programming is a well-known technique in which multiple threads in a process share their data space with the main thread which makes information sharing and communication within threads easy and efficient. Threads are lighter than processes. Multi threads may execute individually while sharing their process resources. The purpose of multithreading is to run multiple tasks and function cells at the same time.

Multiprocessing allows you to run multiple unrelated processes simultaneously. These processes do not share their resources and communicate through IPC.

To understand processes and threads, consider this scenario: An .exe file on your computer is a program. When you open it, the OS loads it into memory, and the CPU executes it. The instance of the program which is now running is called the process.

Every process will have 2 fundamental components:

Now, a process can contain one or more sub-parts called threads. This depends on the OS architecture,.You can think about a thread as a section of the process which can be executed separately by the operating system.

In other words, it is a stream of instructions which can be run independently by the OS. Threads within a single process share the data of that process and are designed to work together for facilitating parallelism.

Multithreading allows you to break down an application into multiple sub-tasks and run these tasks simultaneously. If you use multithreading properly, your application speed, performance, and rendering can all be improved.

Python supports constructs for both multiprocessing as well as multithreading. In this tutorial, you will primarily be focusing on implementing multithreaded applications with python. There are two main modules which can be used to handle threads in Python:

However, in python, there is also something called a global interpreter lock (GIL). It doesn’t allow for much performance gain and may even reduce the performance of some multithreaded applications. You will learn all about it in the upcoming sections of this tutorial.

The Thread and Threading modules

The two modules that you will learn about in this tutorial are the thread module and the threading module.

However, the thread module has long been deprecated. Starting with Python 3, it has been designated as obsolete and is only accessible as __thread for backward compatibility.

You should use the higher-level threading module for applications which you intend to deploy. The thread module has only been covered here for educational purposes.

The syntax to create a new thread using this module is as follows:

Alright, now you have covered the basic theory to start coding. So, open your IDLE or a notepad and type in the following:


Save the file and hit F5 to run the program. If everything was done correctly, this is the output that you should see: 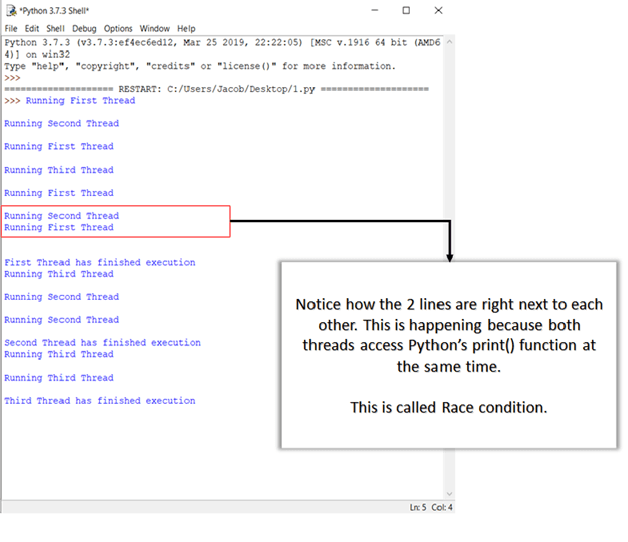 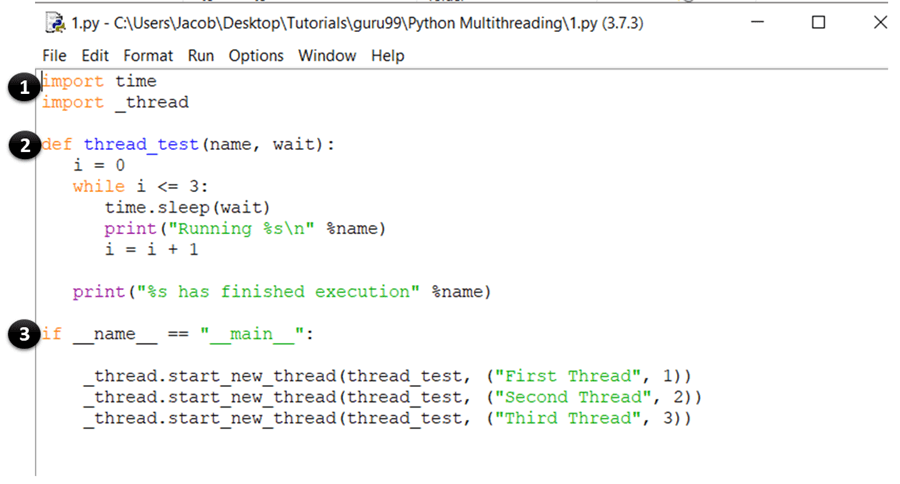 This module is the high-level implementation of threading in python and the de facto standard for managing multithreaded applications. It provides a wide range of features when compared to the thread module.

Here is a list of some useful functions defined in this module:

Before you start coding multithreaded programs using the threading module, it is crucial to understand about the Thread class.The thread class is the primary class which defines the template and the operations of a thread in python.

The most common way to create a multithreaded python application is to declare a class which extends the Thread class and overrides it’s run() method.

The Thread class, in summary, signifies a code sequence that runs in a separate thread of control.

So, when writing a multithreaded app, you will do the following:

Now, let’s try using the threading module to implement your previous example. Again, fire up your IDLE and type in the following:

This will be the output when you execute the above code: 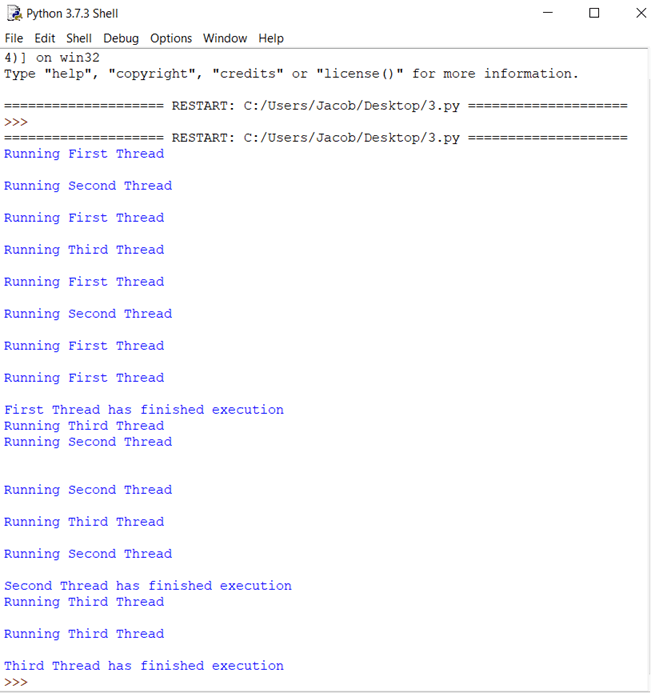 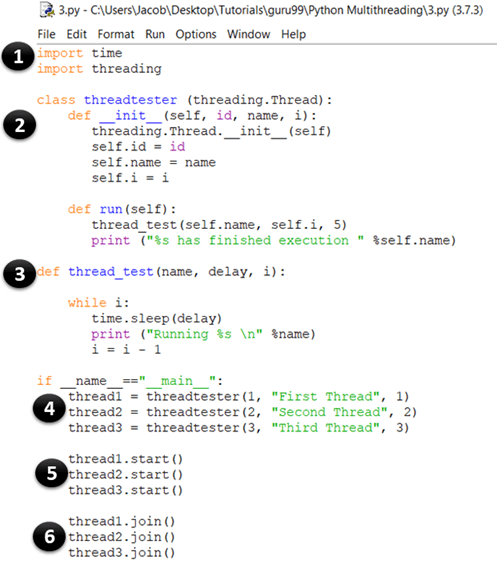 As you already know, the threads which are in the same process have access to the memory and data of that process. As a result, if more than one thread tries to change or access the data simultaneously, errors may creep in.

In the next section, you will see the different kinds of complications that can show up when threads access data and critical-section without checking for existing access transactions.

Before learning about deadlocks and race conditions, it’ll be helpful to understand a few basic definitions related to concurrent programming:

Deadlocks are the most feared issue that developers face when writing concurrent/multithreaded applications in python. The best way to understand deadlocks is by using the classic computer science example problem known as the Dining Philosophers Problem.

The problem statement for dining philosophers is as follows:

Five philosophers are seated on a round table with five plates of spaghetti (a type of pasta) and five forks, as shown in the diagram.

At any given time, a philosopher must either be eating or thinking.

Moreover, a philosopher must take the two forks adjacent to him (i.e., the left and right forks) before he can eat the spaghetti. The problem of deadlock occurs when all five philosophers pick up their right forks simultaneously.

Since each of the philosophers has one fork, they will all wait for the others to put their fork down. As a result, none of them will be able to eat spaghetti.

Similarly, in a concurrent system, a deadlock occurs when different threads or processes (philosophers) try to acquire the shared system resources (forks) at the same time. As a result, none of the processes get a chance to execute as they are waiting for another resource held by some other process.

A race condition is an unwanted state of a program which occurs when a system performs two or more operations simultaneously. For example, consider this simple for loop:

If you create n number of threads which run this code at once, you cannot determine the value of i (which is shared by the threads) when the program finishes execution. This is because in a real multithreading environment, the threads can overlap, and the value of i which was retrieved and modified by a thread can change in between when some other thread accesses it.

These are the two main classes of problems that can occur in a multithreaded or distributed python application. In the next section, you will learn how to overcome this problem by synchronizing threads.

To deal with race conditions, deadlocks, and other thread-based issues, the threading module provides the Lock object. The idea is that when a thread wants access to a specific resource, it acquires a lock for that resource. Once a thread locks a particular resource, no other thread can access it until the lock is released. As a result, the changes to the resource will be atomic, and race conditions will be averted.

A lock is a low-level synchronization primitive implemented by the __thread module. At any given time, a lock can be in one of 2 states: locked or unlocked. It supports two methods:

Here’s an example of using locks in your apps. Fire up your IDLE and type the following:

Now, hit F5. You should see an output like this: 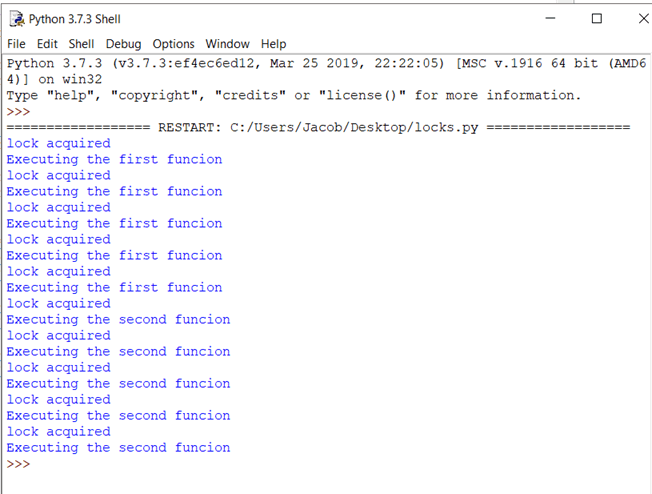 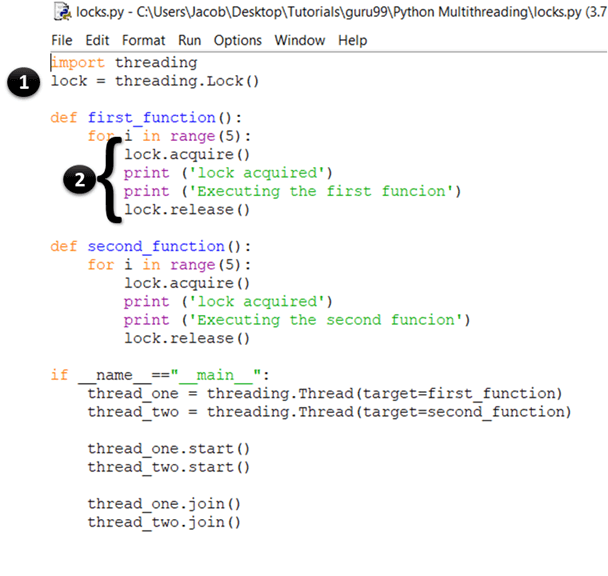 The theory is fine, but how do you know that the lock really worked? If you look at the output, you will see that each of the print statements is printing exactly one line at a time. Recall that, in an earlier example, the outputs from print where haphazard because multiple threads were accessing the print() method at the same time. Here, the print function is called only after the lock is acquired. So, the outputs are displayed one at a time and line by line.

Apart from locks, python also supports some other mechanisms to handle thread synchronization as listed below:

Global Interpreter Lock (and how to deal with it)

Before getting into the details of python’s GIL, let’s define a few terms that will be useful in understanding the upcoming section:

What is GIL in Python?

Global Interpreter Lock (GIL) in python is a process lock or a mutex used while dealing with the processes. It makes sure that one thread can access a particular resource at a time and it also prevents the use of objects and bytecodes at once. This benefits the single-threaded programs in a performance increase. GIL in python is very simple and easy to implement.

A lock can be used to make sure that only one thread has access to a particular resource at a given time.

One of the features of Python is that it uses a global lock on each interpreter process, which means that every process treats the python interpreter itself as a resource.

For example, suppose you have written a python program which uses two threads to perform both CPU and ‘I/O’ operations. When you execute this program, this is what happens:

This is alright in a single-core processor because it would be using time slicing (see the first section of this tutorial) to handle the threads. However, in case of multi-core processors, a CPU-bound function executing on multiple threads will have a considerable impact on the program’s efficiency since it won’t actually be using all the available cores at the same time.

Why was GIL needed?

But the problem is that the reference count variable is prone to race conditions like any other global variable. To solve this problem, the developers of python decided to use the global interpreter lock. The other option was to add a lock to each object which would have resulted in deadlocks and increased overhead from acquire() and release() calls.

Therefore, GIL is a significant restriction for multithreaded python programs running heavy CPU-bound operations (effectively making them single-threaded). If you want to make use of multiple CPU cores in your application, use the multiprocessing module instead.