What is CURSOR in PL/SQL?

A Cursor is a pointer to this context area. Oracle creates context area for processing an SQL statement which contains all information about the statement.

PL/SQL allows the programmer to control the context area through the cursor. A cursor holds the rows returned by the SQL statement. The set of rows the cursor holds is referred as active set. These cursors can also be named so that they can be referred from another place of the code.

In this tutorial you will learn-

The cursor is of two types.

Whenever any DML operations occur in the database, an implicit cursor is created that holds the rows affected, in that particular operation. These cursors cannot be named and, hence they cannot be controlled or referred from another place of the code. We can refer only to the most recent cursor through the cursor attributes.

Programmers are allowed to create named context area to execute their DML operations to get more control over it. The explicit cursor should be defined in the declaration section of the PL/SQL block, and it is created for the ‘SELECT’ statement that needs to be used in the code.

Below are steps that involved in working with explicit cursors.

Explicit Cursor Example:
In this example, we are going to see how to declare, open, fetch and close the explicit cursor.

We will project all the employee’s name from emp table using a cursor. We will also use cursor attribute to set the loop to fetch all the record from the cursor. 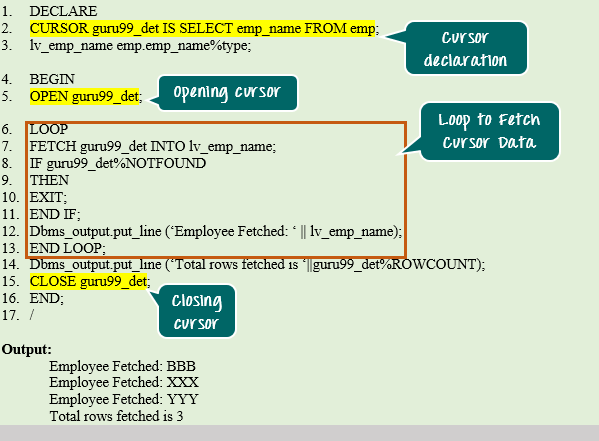 Oracle Cursor for Loop Example:
In this example, we will project all the employee name from emp table using a cursor-FOR loop.

Note: In Cursor-FOR loop, cursor attributes cannot be used since opening, fetching and closing of the cursor is done implicitly by FOR loop.