Oracle PL/SQL FOR LOOP with Example

What is For Loop?

"FOR LOOP" statement is best suitable when you want to execute a code for a known number of times rather than based on some other conditions.

In this loop, the lower limit and the higher limit will be specified and as long as the loop variable is in between this range, the loop will be executed.

Example 1: In this example, we are going to print number from 1 to 5 using FOR loop statement. For that, we will execute the following code. 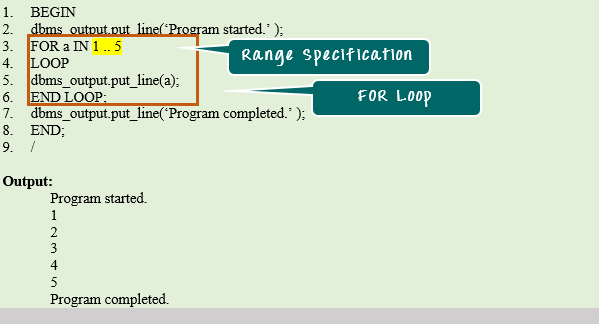 The loop statements can also be nested. The outer and inner loop can be of different types. In the nested loop, for every one iteration value of the outer loop, the inner loop will be executed fully.

Example 1: In this example, we are going to print number from 1 to 3 using FOR loop statement. Each number will be printed as many times as its value. For that, we will execute the following code.

In this tutorial, we are going to learn how to use SQL in PL/SQL. SQL is the actual component that...

What is Package in Oracle? PL/SQL package is a logical grouping of a related subprogram...

What are Loops? Loops allows a certain part of the code in a program to get executed for the...

What is PL/SQL block? In PL/SQL, the code is not executed in single line format, but it is always...

What is PL/SQL? Oracle PL/SQL is an extension of SQL language that combines the data manipulation power...

What is Object Type in PL/SQL? Object-Oriented Programming is especially suited for building...