What is Microsoft SQL server?

MS SQL server is a database product of Microsoft. It allows users to SQL queries and execute them. It is among the most stable, secure and reliable database solutions. It supports wide variety of transaction processing, analytics, and business intelligence applications in corporate IT environments.

What is Oracle Database?

Oracle database is an RDMS system from Oracle Corporation. The software is built around the relational database framework. It allows data objects to be accessed by users using SQL language. Oracle is a completely scalable RDBMS architecture which is widely used all over the world.

Oracle is one of the biggest vendor in the IT market and the shorthand name of its flagship RDBMS product, that was formally called Oracle Database.

In 1987, Microsoft partnered with Sybase Solutions for developing DBMS which may compete with other IT giants like IBM and Oracle. Both these companies agreed that Sybase will have all the selling rights and profit earned from the product designed for the Non-Microsoft platform.

Microsoft, on the other hand, will have rights to the database product designed for Microsoft Platforms. In 1989 the first database server product version was released.

After that, Microsoft purchase all the rights from Sybase and they changed the name to MS SQL Server. Till date, 30 versions of MS SQL, has been released.

Oracle Corporation has a distance long journey to become the multinational technology company that it has at the current time.

In 1977 the Oracle Organisation was founded by two developers, Larry Ellison and Bob Miner. Both had prior experience in developing database software for different organizations.

In the year 1978, they were able to build a first RDBMS using SQL. This software is known as Oracle Relational Database Management System.

Oracle became the first company to sell the RDBMS software and within 1982 had yearly revenue of $2.5 million. 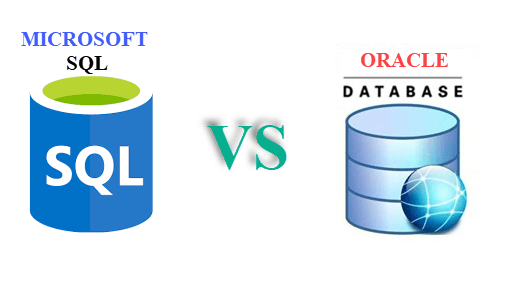 Difference between SQL Server and Oracle