Docker is an open-source lightweight containerization technology. It has gained widespread popularity in the cloud and application packaging world. It allows you to automate the deployment of applications in lightweight and portable containers.

2. What are the advantages of using Docker container?

Here, are a major advantage of using Docker.

3. What are the important features of Docker?

Here are the essential features of Docker:

4. What are the main drawbacks of Docker?

Some notable drawbacks of Docker are:

5. What is Docker image?

6. What is Docker Engine?

Docker daemon or Docker engine represents the server. The docker daemon and the clients should be run on the same or remote host, which can communicate through command-line client binary and full RESTful API.

There are two types of registry is

Docker’s public registry is called Docker hub, which allows you to store images privately. In Docker hub, you can store millions of images.

8. What command should you run to see all running container in Docker?

9. Write the command to stop the docker container

10. What is the command to run the image as a container?

11. What are the common instruction in Dockerfile? 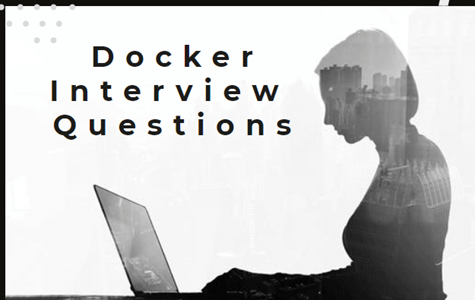 The common instruction in Dockerfile are: FROM, LABEL, RUN, and CMD.

Memory-swap is a modified flag that only has meaning if- memory is also set. Swap allows the container to write express memory requirements to disk when the container has exhausted all the RAM which is available to it.

Docker Swarm is native gathering for docker which helps you to a group of Docker hosts into a single and virtual docker host. It offers the standard docker application program interface.

14. How can you monitor the docker in production environments?

Docker states and Docker Events are used to monitoring docker in the production environment.

15. What the states of Docker container?

Important states of Docker container are:

Docker hub is a cloud-based registry that which helps you to link to code repositories. It allows you to build, test, store your image in Docker cloud. You can also deploy the image to your host with the help of Docker hub.

Virtualization is a method of logically dividing mainframes to allow multiple applications to run simultaneously.

However, this scenario changed when companies and open source communities were able to offer a method of handling privileged instructions. It allows multiple OS to run simultaneously on a single x86 based system.

The hypervisor allows you to create a virtual environment in which the guest virtual machines operate. It controls the guest systems and checks if the resources are allocated to the guests as necessary.

20. Write a Docker file to create and copy a directory and built it using python modules?

21. Where the docker volumes are stored?

You need to navigate:

23. How does communication happen between Docker client and Docker Daemon?

You can communicate between Docker client and Docker Daemon with the combination of Rest API, socket.IO, and TCP.

You need to do the following things:

25. What are the command to control Docker with Systemd?

26. How to use JSON instead of YAML compose file?

27. What is the command you need to give to push the new image to Docker registry?

28. How to include code with copy/add or volumes?

In docker file, we need to use COPY or ADD directive. This is useful to relocate code. However, we should use a volume if we want to make changes.

29. Explain the process of scaling your Docker containers

The Docker containers can be scaled to any level starting from a few hundred to even thousands or millions of containers. The only condition for this is that the containers need the memory and the OS at all times, and there should not be a constraint when the Docker is getting scaled.

30. What is the method for creating a Docker container?

You can use any of the specific Docker images for creating a Docker container using the below command.

This command not only creates the container but also start it for you.

31. What are the steps for the Docker container life cycle?

Below are the steps for Docker life cycle:

32. How can you run multiple containers using a single service?

34. Does Docker offer support for IPV6?

Yes, Docker provides support IPv6. IPv6 networking is supported only on Docker daemons runs on Linux hosts. However, if you want to enable IPv6 support in the Docker daemon, you need to modify /etc/docker/daemon.json and set the ipv6 key to true.

35. Can you lose data when the container exits?

No, any data that your application writes to disk get stored in container. The file system for the contain persists even after the container halts.

36. What are a different kind of volume mount types available in Docker?

Bind mounts- It can be stored anywhere on the host system

37. How to configure the default logging driver under Docker?

To configure the Docker daemon to default to a specific logging driver. You need to set the value of log-driver to the name of the logging drive the daemon.jason.fie.

Docker Trusted Registry is the enterprise-grade image storage toll for Docker. You should install it after your firewall so that you can securely manage the Docker images you use in your applications.

39. What are Docker Namespaces?

The Namespace in Docker is a technique which offers isolated workspaces called the Container. Namespaces also offer a layer of isolation for the Docker containers.

40. What are the three components of Docker Architecture

42. What is the purpose of Docker_Host?

It contains container, images, and Docker daemon. It offers a complete environment to execute and run your application.

43. How do I run multiple copies of Compose file on the same host?

Compose uses the project name which allows you to create unique identifiers for all of a project’s containers and other resources. To run multiple copies of a project, set a custom project name using the -a command-line option or using COMPOSE_PROJECT_NAME environment variable.