Severity Vs. Priority: Difference Between Them

What is Bug Severity

Bug Severity or Defect Severity in testing is a degree of impact a bug or a Defect has on the software application under test. A higher effect of bug/defect on system functionality will lead to a higher severity level. A Quality Assurance engineer usually determines the severity level of a bug/defect.

In Software Testing, Types of Severity of bug/defect can be categorized into the following parts:

Types of Priority of bug/defect can be categorized into three parts :

Tips for determining the Severity of a Defect

Difference between Severity and Priority in Testing

Example of Defect Severity and Priority 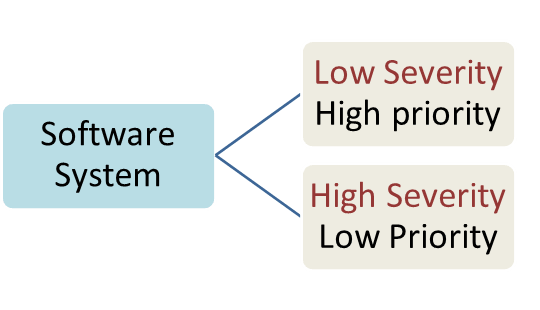 Defect triage is a process that tries to do the re-balancing of the process where the test team faces the problem of limited availability of resources. So, when there are large number of the defect and limited testers to verify them, defect triage helps to try to get as many defects resolved based on defect parameters like severity and priority.

How to determine Defect Triage:

Most systems use priority as the main criteria to assess the defect. However, a good triage process considers the severity as well.

Guidelines that every tester should consider before selecting a severity

In Software Engineering, Assigning wrong severity to defect can delay the STLC process and can have some drastic implication on the overall performance of the team. So, the responsible person needs to be precise and accurate on its call for assigning defect.