In this tutorial, we will use QTP (HP UFT) to create

So let’s get started –

Data Driven Framework is a framework which is driven by the different combinations of input and output data.

However, in DDF, scripts are written to do parameterization. This kind of framework is useful when the AUT’s functionality must be tested with several inputs and capture the respective outputs. These inputs can be read from an external file such as Database, Excel, Outlook, Text file etc and the respective outputs are written back to the corresponding external source.

The general steps involved in the data-driven framework are:

In this tutorial, we will develop a data-driven framework design for a sample test case by using Excel as an external source for the Test data.

Step1) Prepare the Test Case for the Application under Test

Test Case: Open the order number and get the customer name for that order. Repeat the same process for different Order numbers 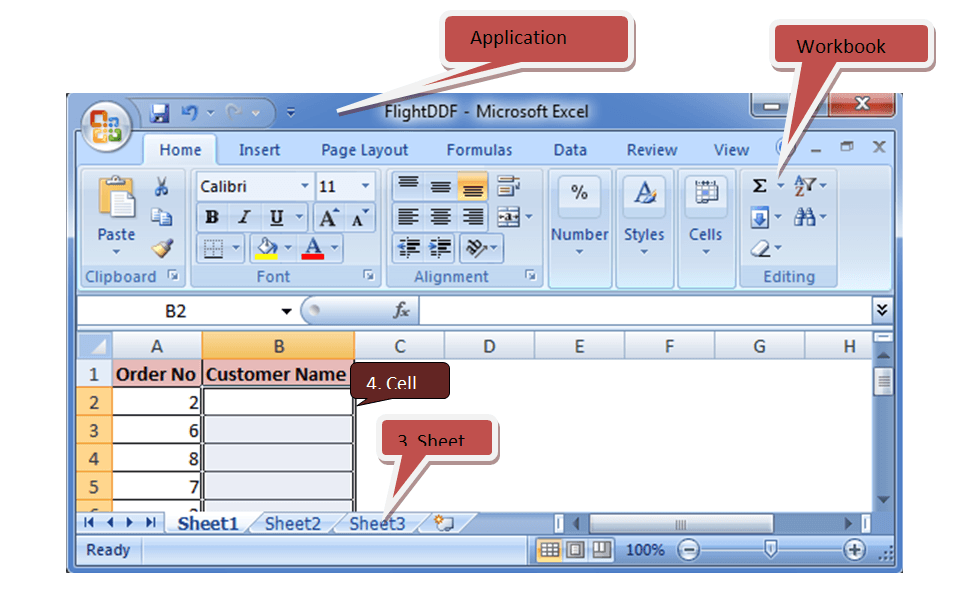 The External source for this sample is an Excel file. The VB script in Micro Focus UFT must be written to open an Excel file in order to read the test data. This can be achieved in a hierarchical manner.

1. An Excel file is first opened an as Application

2. Then the workbook must be opened from the specified location

3. The sheet where the test data are present.

4. Finally, the cell must be read.

Step 2) Add the Objects from AUT to OR

Once the Test case is ready, start adding all the required objects to the repository. In our test case, the objects need to be added are as follows

Once all the required objects have been added, the object repository will appear as follows: 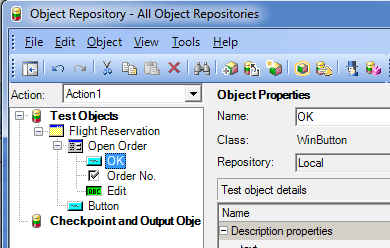 Step 3) Write the scripts based on the Test Case

Before running the script, ensure that the Excel file containing the test data has been saved and is closed. 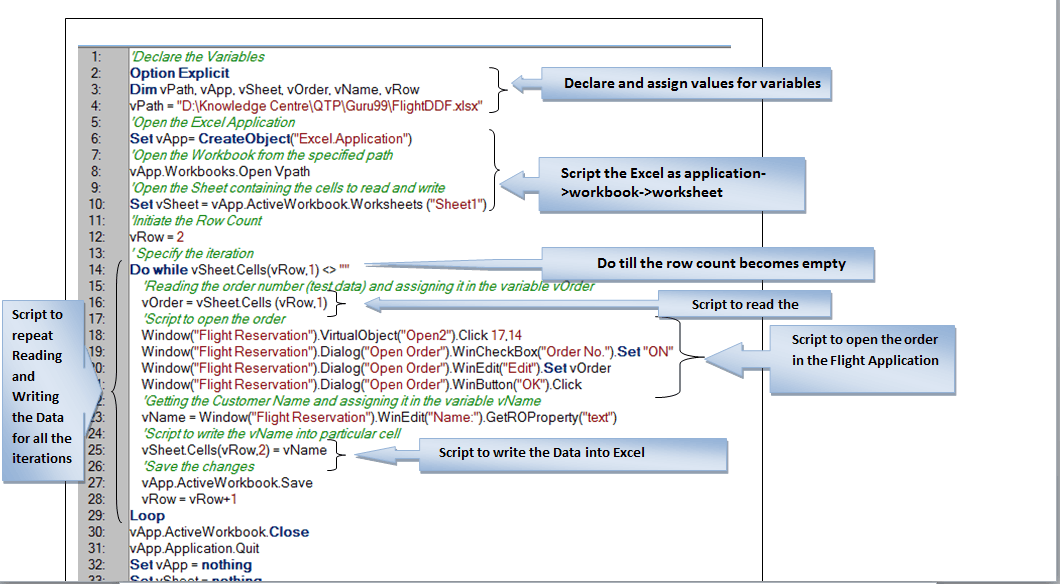 Once the above script is run, the output can be obtained from the Excel as follows: 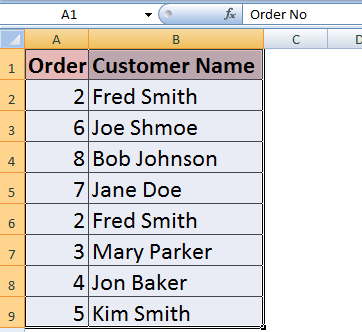 The Data-Driven Framework can also be developed by writing descriptive programming.

Using Database as an External Source for DDF 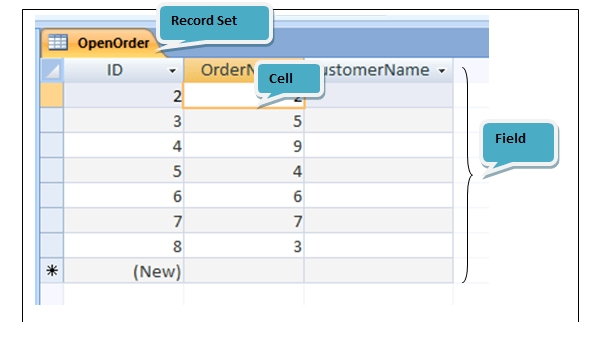 P.S: Microsoft Access 2010 cannot be connected using the below script. 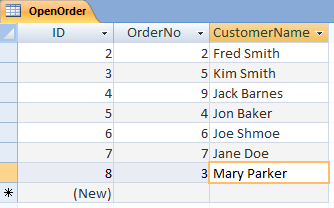 Keyword Driven Framework is a framework where keywords drive the test. Here keyword refers to the user-defined functions. In this framework, keywords are created in order to perform a particular test step or a test case. These keywords are then called into the driver test to run several test cases in the same test.

To know about user-defined functions in QTP, please visit here

In general, the frameworks can be developed in three ways in order to run to the test.

In this tutorial, The KDF is developed by recording and running the test.

Our aim is to run a single test for five different test cases such as login into the application, insert an order, open an order, delete an order and close the application. Hence, we will record the test steps for these test cases and create the functions with keywords Login, InsertOrder, OpenOrder, DeleteOrder and CloseApp respectively.

Test Case1: Login into the application

The Driver Script for this simple framework looks as: 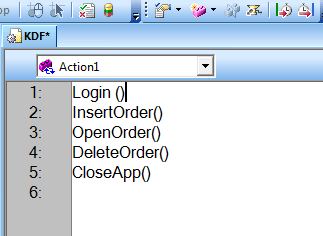 By running the above script, the actual result for all the five test cases can be obtained from a single test.

In this article, the same test cases that are used in KDF will be executed in a single test. The Keywords and the scripts for all the test cases are same as in KDF. However, TC3: Open the order has been parameterized. Hence the script for this test case is written to receive the order number from an Excel file and to write the customer name into the excel file 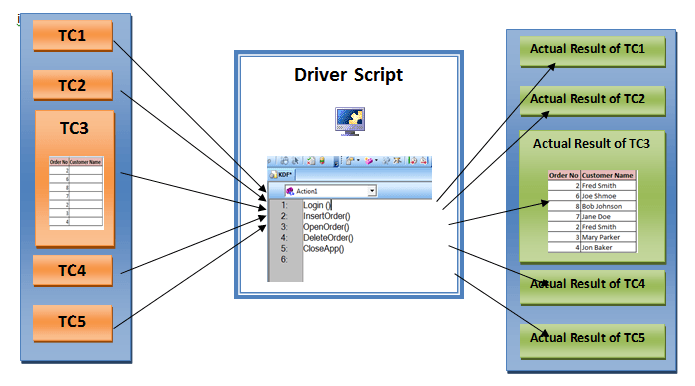 Test Case1: Login into the application

Description: Here the same script used to develop a DDF is used, thereby achieving the test case for several iterations. 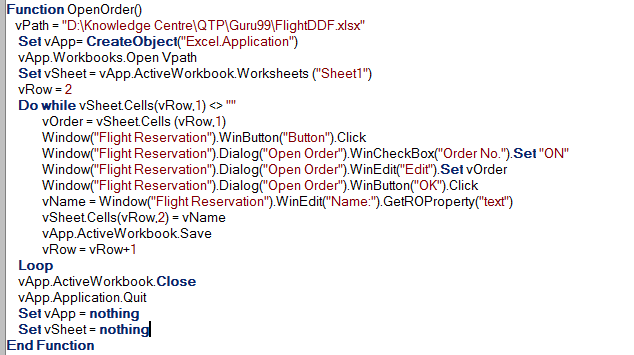 By following this simple method, the parameterization of TC3 is achieved. If applicable, all the other test cases can also be parameterized in the same test.

For example, is a very simple way of designing a hybrid framework. The same framework can also be achieved with descriptive programming.