Automation is a technique of making devices, a process or a system to operate automatically.

There are four automation categories

Robotic Process Automation(RPA) is software that can mimic the action of a human user. It performs actions on a PC to automate business processes which are highly repetitive and rule-based.

What is Automation Anywhere?

Automation Anywhere is one of the popular RPA vendors offering powerful & user-friendly RPA capabilities to automate any complex tasks. It is one of the "Revolutionary Technology" that changes the way the enterprise operates. This tool combines conventional RPA with intellectual elements like natural language understanding and reading any unstructured data.

Automation Anywhere allows organizations to automate the processes which are performed by the humans. It is a Web-Based Management System which uses a Control Room to run the Automated Tasks. Automation Anywhere tool can automate ends to end business operations for companies. 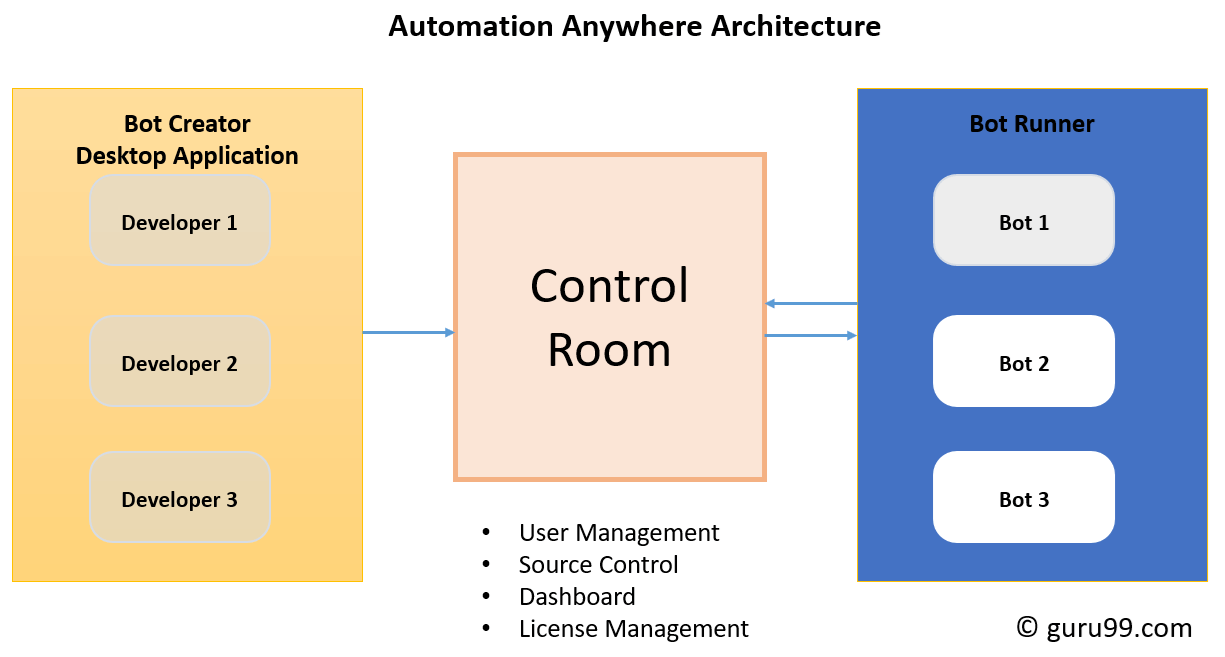 Apart from that the control room deal with

There are 2 types of Licenses in Automation Anywhere

Bot Runner - The Bot Runner is the machine where you run the bot. You could have multiple bots running in parallel. You only need the Run License to run the bots. The bots report back the execution logs/pass/fail status back to the control room.

Other important components of Automation Anywhere

The tool shows statistic and display graphs to analyze the performance of every bot in the system. Here, you can also calculate the time you have saved because of the automation process.

BotFarm is integrated with Automation Anywhere Enterprise. It allows you to create multiple bots. Moreover, you can also give these bots on the rental basis.

Bot Store is a first digital workforce marketplace. Here, you will get lots of pre-built bots for every type of business automation.

Task bots are bots which automate rule-based, repetitive task, in areas like document administration, HR, claims management, IT services and more. This leads to immediate improvement in productivity, error reduction, and cost saving.

Meta bots are the automation building blocks. It is designed in such a way that with application updates or changes you need to make minimal edits to the bot. Changes automatically apply to any process utilizing that bot.

It is an advanced tool. It can learn on its own and perform a task according to it. IQ Bot offers automation using the highly advanced cognitive technology. It works on the concept to organize an unstructured data while improving its skills and performance.

Automation anywhere tool should be used because of following reasons:

What is an SDET? SDET is an IT professional who can work equally effectively in development and...

Exploratory testing is a type of software testing in which test cases are not created in advance,...

What is Salesforce? Salesforce is the world's first cloud-based CRM system. It was founded by Marc...

What is Scrum? Scrum is Agile Development Framework for managing product development. It is...